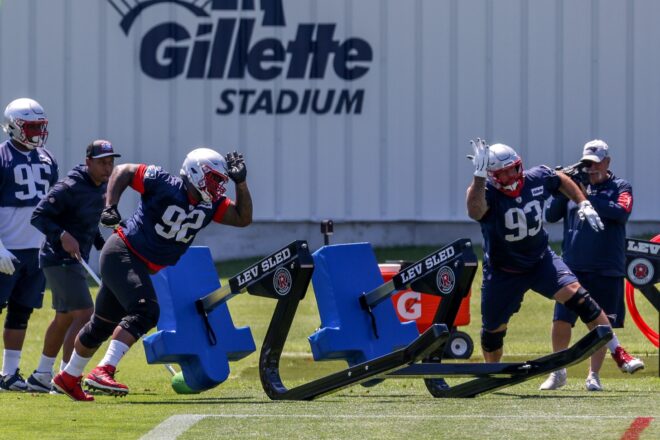 As part of this week’s schedule, the team will hold public practices Monday-Thursday beginning at 9:30am with the gates opening at 8:30am for fans. Friday’s practice will be limited just to season ticket holders and Foxborough town residents and will be held inside Gillette Stadium.

Beginning on Tuesday, work in full pads will commence for the team according to Bill Belichick along with an uptick in intensity and pace.

“We’re heading into kind of the next phase here as practices change a little bit, both in length and intensity and so forth, so it’s a good opportunity for us this week to really work on our fundamentals and get used to playing in more real football-type conditions, so looking forward to that,” Belichick said Monday. “A lot of work to do here. We just continue to build every day add a little something new. We need to add. Be ready to go here by hopefully the end of the week and then that’ll give us a few days next week to start to prepare for Washington.”

Meanwhile, take a look at some of the best sights and sounds shared over social media by the team and local media from today’s camp session below.

This is a cool drill setup for the #Patriots WRs. Have to go under the bridge. Forces the players to keep their pads down, which makes it harder for DBs to read a route break. pic.twitter.com/RsWWx8VbIU

The #Patriots are back to work after a day off Sunday. The pads come on tomorrow. Here's rookie Mac Jones connecting with Hunter Henry on a crossing route.@NBC10Boston @RaulNBCBoston pic.twitter.com/AJvHAVxt55

Play of the day candidate: Mac Jones hits Isaiah Zuber on a 50 yard post, Zuber leaped up and made the catch above Dee Virgin and D’Angelo Ross, and held onto the ball despite contact from both.

'Big kick Nick' Folk enjoys the veteran privilege of having rookie kicker Quinn Nordin tote all the gear from station to station. pic.twitter.com/Z8eKcmggLh

Wilkerson also continued his work with punt gunners Matthew Slater and Justin Bethel on the side field. Often in the mix with veteran receivers, he’ll look to continue to “stack days” after pads come on Tuesday. pic.twitter.com/lgCPM7QHNV

Patriots rookie skits took place and Mac Jones as Cam Newton had some veterans in stitches. Jones used a suitcase as prop and arrived dressed as Cam.

"This is my 5th year in the league; that's probably the best rookie impersonation I've ever seen," LB Raekwon McMillan said.

#Patriots WR Kendrick Bourne asked about a TD pass he celebrated last week with Mac Jones, who hit him in the back of the end zone.

"I told him after, I don’t know how you got it in that window… to have that kind of accuracy, it’s impressive, man. I’m excited to see him grow.”

Practice ends for the @patriots with a “gotta have it” 4th-and-goal moment. After an incomplete slant from Cam Newton to Nelson Agholor, the entire offense (and specialists) ran a lap around both fields. Damien Harris set the pace and finished first by a wide margin.

Nice moment after practice: Looked like entire personnel staff gathered around longtime director of scouting administration Nancy Meier for a photo. This is season 47 with the Patriots for Meier.

Running into a new week. pic.twitter.com/vtAqr9aGsn

Patriots prepare for the pads to come on in tomorrow's practice. pic.twitter.com/8ULDx7EdCO