3 weeks ago at 11:24 am ET
Follow @IanLogue
Posted Under: Patriots News 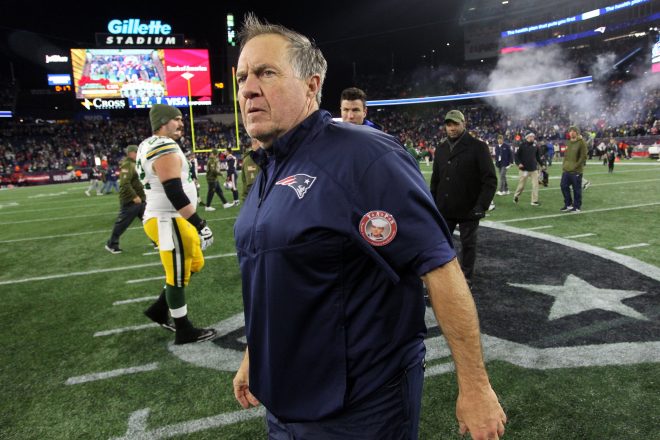 Some news and notes on this Tuesday morning:

1) The New England Patriots made a surprising move on Monday after making a trade with the Texans to acquire some additional draft picks heading into this weekend’s NFL Draft.

According to ESPN’s Adam Schefter, the club sent a 5th-round pick to Houston in exchange for a 6th (#183) and 7th-round (#245) selection, allowing New England some additional currency as they continue working on upgrading their roster.

Those selections will likely accomplish one or two scenarios.  They’ll give the Patriots the ability to potentially trade up in the middle rounds if they have someone they’re targeting, as well as give them an opportunity to use later round selections on guys they may have felt could have been undrafted free agents, while preventing them from having to compete with other clubs during the mad scramble that occurs after the culmination of the draft.

Either way, the move signaled that the Patriots clearly have players in mind and used the opportunity to work with former front office member, Nick Caserio, to give them some additional selections to work with.  Now we’ll just have to see what that plan will be beginning Thursday night.

2) Just to reset, these are the current picks New England has heading into the 2022 NFL Draft:

It’s probably pretty unlikely these will remain the final selections as it’s safe to say we’ll see them either move up and down the board at some point during the process.

But following the trade, they now have a total of nine selections, which has them well-armed to be able to hopefully go after whoever might be on the radar.

N’Keal Harry could also end up playing into things, as recent reports have said the two sides have had a “positive dialogue” about a potential trade, which would likely see him fetch – at best – a later-round pick.

Whether or not that would be for this year or a potential future conditional pick would be the only question, but the fact progress is being made on that front is encouraging.

The acquisition of DeVante Parker essentially pushed Harry far enough down the depth chart where keeping him makes little sense, so hopefully, an agreement can be reached to give both sides the chance to move on.

Harry recently posted a video of himself working out in Arizona, likely hoping to raise his stock.

Agent for N’Keal Harry says via text Harry, though away from the start of team workouts, “understands what’s at stake this season and is doing his part to make sure he will be ready!” Also says he’s had “positive dialogue with the #Patriots about exploring trade possibilities.” https://t.co/atkXU9vsVP

3) There were photos circulating around the internet yesterday that included Julian Edelman, Rob Gronkowski, and Tom Brady wearing Patriots gear, which definitely had some people talking.

Edelman posted a photo that saw him and the future Hall of Fame quarterback in team uniform pants, along with Gronkowski.  The trio was apparently on a movie set and Brady is reportedly co-producing a film called “Eighty for Brady”, which according to The Hollywood Reporter, is a football-themed road trip movie about four Patriots fans who travel to Super Bowl LI to see Brady play.

The film is reportedly based on a true story and will include actresses Sally Field, Jane Fonda, Lily Tomlin and Rita Moreno.

The film is listed on IMDB.com with a summary that reads, “The movie is inspired by the true story of 4 best friends and New England Patriots fans who take a life-changing trip to Super Bowl LI to see their hero Tom Brady play, and the chaos that ensues as they navigate the wilds of the biggest sporting event in the country.”

The film is being directed by Kyle Marvin, with “199 Productions” – Brady’s media company – listed as one of the production companies involved with the film. 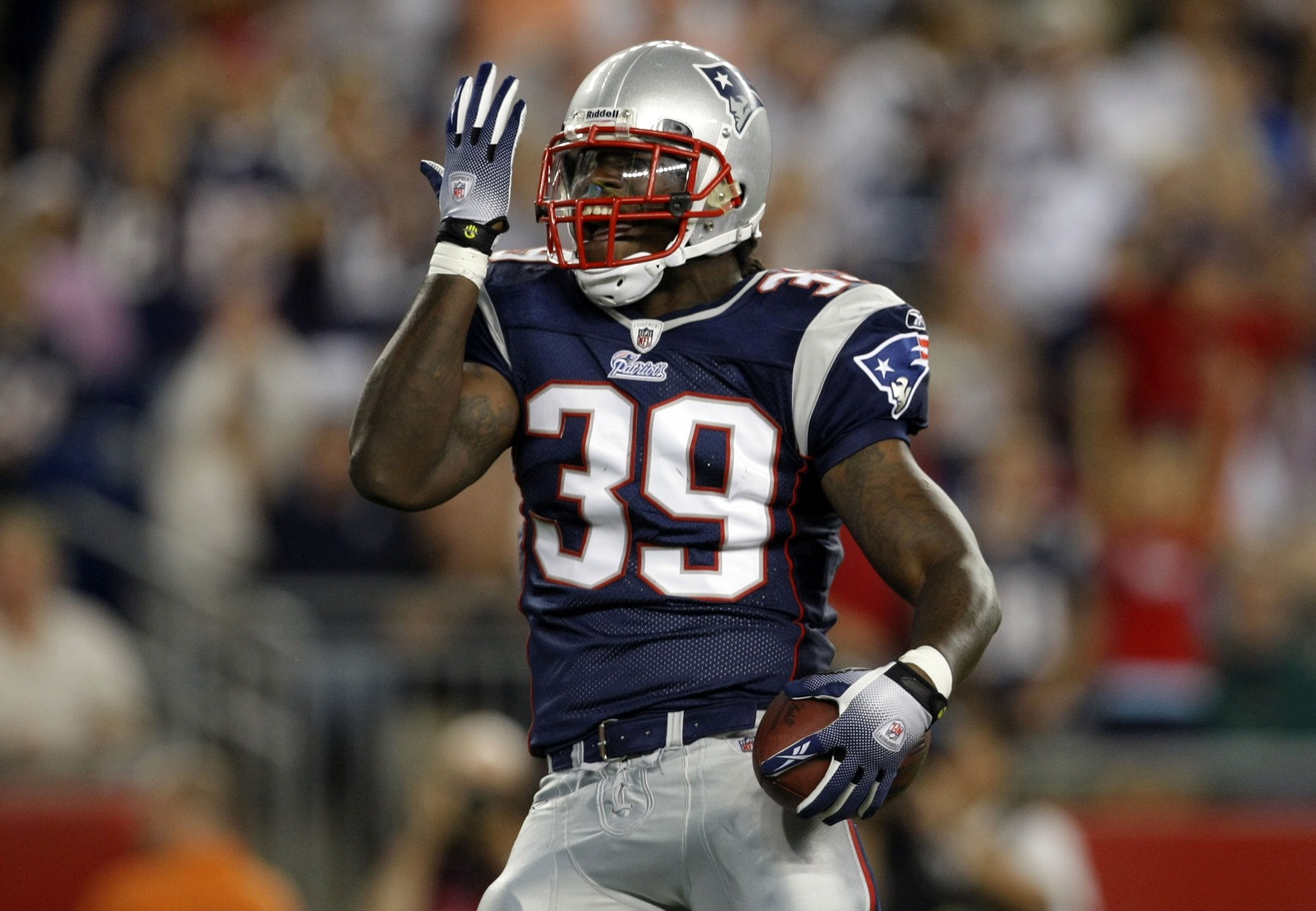 4) Former Patriots running back Laurence Maroney had some promising moments early in his career here in New England, although it sounds like he’d love to have the opportunity to change some things.

The former first-round pick was selected at the same spot in 2006 that the Patriots are currently slated, 21st overall.  The former standout from the University of Minnesota seemed like a great pick, with one of his key traits being his ability to break through contact and get extra yards.

He averaged 4.3 yards per carry during his rookie season, before having a stronger year the following season when he averaged 4.5, gaining a career-high 835 yards on 185 carries in an offense that didn’t run the ball that often, predominantly featuring Brady throwing the football to Randy Moss and Wes Welker.

Maroney, who scored a touchdown in the Super Bowl loss to the Giants at the end of that season, said he felt like he could have rushed for 100-yards in that contest had the club not been focused on throwing the football.

“When we got to the Super Bowl, we just tried to air it out more because it was warm, good weather, and so I feel like if we ran the ball a little more, I probably would have been back over 100 yards that game,” Maroney said via the Deluth News Tribune. “But whenever you watch (that game), you’re going to see me make my touchdown, and that’s a memory that’s going to stay with me forever.”

But Maroney’s love of contact hurt him in 2008 when he suffered what was apparently a significant shoulder injury and he was never the same player.  New England would go on to trade him after the following season to Denver, which ended his time with the Patriots after four seasons.

Maroney admitted he didn’t have the best career and felt he definitely had more to give.

“It definitely was cut short,” said Maroney. “I really wish it was better. I’m not saying I had the worst. But I felt like there were things that I still wanted to deliver to the game, to the NFL, to showcase what I really had. But it’s water under bridge. You can’t go back and change it. It wasn’t the best, it wasn’t the worst. I know I could have done better.”

The 37-year-old retired at the age of 28 and has taken a similar route to former Patriots receiver Aaron Dobson by working in real estate, with Maroney reportedly being involved in rentals and rehabbing homes. He reportedly now lives in St. Louis with his girlfriend Briante, and they are raising three young children.

5) The 49ers are continuing to make it clear that any team looking to acquire Deebo Samuel is going to have to pay dearly, which likely increases the difficulty in getting a deal done to move the receiver.

General Manager John Lynch went so far to say that the disgruntled receiver is too much of a talent for them to just give up on, and they have no intention of just letting him go.

“He’s just too good of a player,” Lynch said via ProFootballTalk.com. “You think of 2019, the 36th pick, to come up with someone like Deebo who, to me, has just been a game-changing player for our franchise. I’ve told Deebo this, I think he’s the perfect illustration. Herm Edwards used to talk about when will meets skill, you’ve got the opportunity to be special. And I think Deebo probably embodies that as much as anyone, he’s got tremendous will, he’s a very talented player.”

“I think by virtue of the way he plays, it’s inspiring and so, to me, that entails leadership. Do you make people around you better? He checks that box. He’s a great teammate. And I think of things like prior to games, I get out there and he’s always throwing the ball with the fans. I think he’s been a great member of our community, so we’ve got nothing but love for him and nothing but appreciation for what he’s bought, but you just don’t let guys like that walk. I can’t envision a scenario where we would.”

While Lynch may say that, the issue may be how far gone things are between the two sides and whether or not those issues can be resolved.  One thing we know is that San Francisco hasn’t been afraid to stay with a player in situations like these, but given the fact Samuel has made it clear he’s done playing football in the Bay Area, it still sounds like this one is far from over.

By: Russ Goldman
In this episode, Steve and Derek break down the 2022 Patriots regular season schedule. The guys also discuss Vince Wilfork's election into the team Hall…
17 hours ago