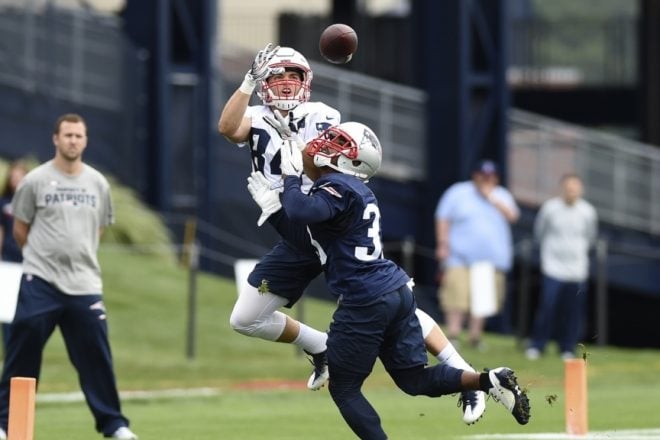 The Patriots wrapped up their seventh practice of the 2017 training camp and their fifth practice in full pads in a row. The crowd was a bit bigger than the past few days probably because it happened to be Tom Brady’s 40th birthday and he was serenaded by the fans near the end of practice. But if you went today, expecting to see a large dose of Brady, then you were disappointed.

After the first few minutes of practice, Brady and nearly all of the first team offensive players retreated to the lower practice fields accompanied by the starting secondary players as well. And there they remained until the practice was nearly over.  Not much could be seen because the storage building outside the practice field was blocking the view. But what little could be seen was that the offensive linemen were pushing the sleds a few times and the rest seemed to be just standing around.Therefore, this was a day for the backups to the lion’s share of the snaps today.

Bill Belichick said in his morning presser that the many players being dinged up have hurt the team’s preparation. Perhaps he felt that the backups weren’t progressing well enough and wanted to get them all the work. Regardless, it was the first time I’ve seen this in the last ten years. Josh McDaniels went down to the lower fields and WR coach Chad O’Shea called the plays.

One on One Drills: In what is becoming my favorite part of practice, albeit the hardest to see at the far end of the field, here are some of the battles we saw:

Geneo Grissom beat Max Rich with a speed move to the outside.
Rich then turned the tables on Grissom later and stoned the big DE cold.
Cole Croston battle Kony Ealy to a draw
Jacob Hollister stopped Harvey Langi who tried a speed rush
Josh Augusta showed a good bull rush against Ted Karras in a good battle
James Ferentz stoned Woodrow Hamilton in another good battle of big men.

Play of the Day: Jacob Hollister burned Jordan Richards on a deep post for a 30-yard touchdown pass from Jimmy G. The young tight end has some intriguing speed.

After practice, Devin McCourty addressed the media with his young baby in his arms.