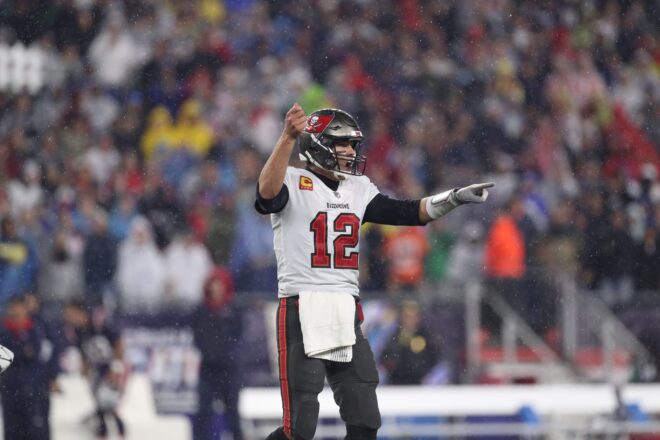 When Tom Brady threw his 600th touchdown pass on Sunday against the Bears, Mike Evans apparently didn’t realize how big the pass he had just caught really was.

Evans caught the football and scored, but then immediately went to the stands and handed the football to Bucs fan, Byron Kennedy.

From there, Evans went back to the bench and sat down, not quite realizing the mistake he just made.

A Buccaneers staff member went back to the stands to try and get Kennedy to give up the football, and the terms of the deal have been disclosed and it sounds like he made out fairly well.

For good measure, they also provided him with season tickets for the remainder of the 2021 season, as well as all of next year.

But Brady apparently didn’t feel that was good enough.  The quarterback revealed that he also gave Kennedy one bitcoin, which is valued at $63,000.

He spoke to the Manning Brothers last night during Monday night football and felt that Kennedy’s decision to give up the football took away any negotiating power he might have had and Brady wanted to do something else to help him out.

“Byron lost all his leverage when he gave up the ball,” laughed Brady. “He should’ve held it. … (But) I’m also giving him a Bitcoin, so at the end of the day, I think he’s making out pretty well.”

“He lost all of his leverage once he gave the ball away.”@TomBrady got his 600th TD ball back. It'll cost him some bitcoin 😂⁰⁰📺: ESPN2 pic.twitter.com/wsY0IH7xKs

Brady had a big afternoon against Chicago on his record-breaking afternoon, finishing the game throwing four touchdowns during their 38-3 victory over the Bears on Sunday.