The current bleachers are stressed to the max every day and there still remains joint practices with the Jaguars upcoming. Those practice sessions are always very well attended and if the first three dates of 2017 are any indication, then they should look into expanding those bleachers farther back and adding extra rows. 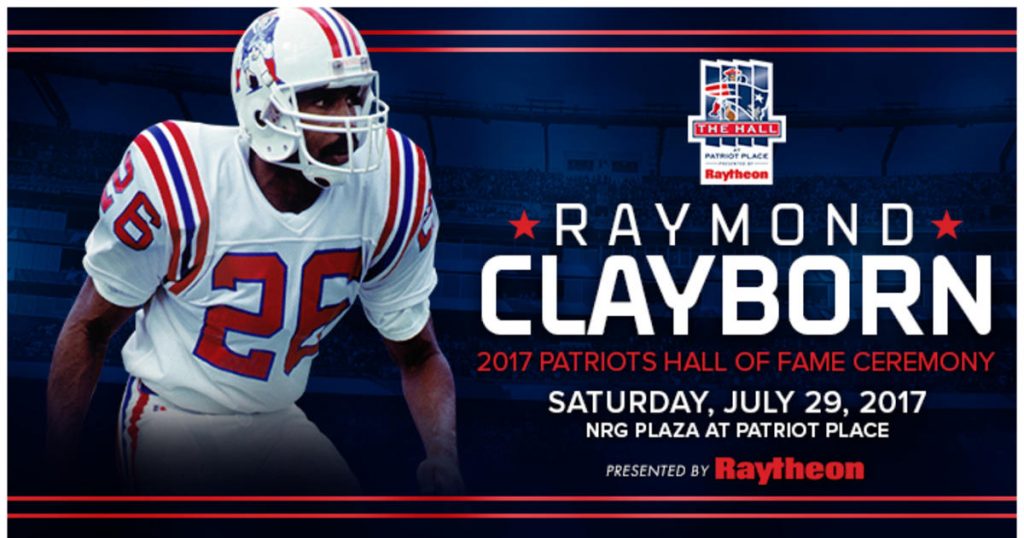 Congratulations…It is About Time for Raymond Clayborn:

The Patriots Hall of Fame got its 26th member, and he wore #26 for the team. He’s been well-deserving for a long, long time and on Saturday, that wrong was righted as he was fitted with the red jacket and became a member of the team’s Hall. From the Patriots.com website:

Drafted by the Patriots in the first round (16th overall) out of the University of Texas in 1977, Clayborn eventually became one of the game’s best at the position, earning three Pro Bowl honors (1983, ‘85, and ‘86). A native of Fort Worth, Texas, he went on to set a franchise record with 36 career interceptions, a milestone which fellow Patriots Hall inductee Ty Law tied equaled in 2004. Clayborn also excelled as a kickoff returner during his 13-year Patriots career, something Patriots owner Robert Kraft touched upon during his introductory remarks.

Kraft recalled watching from the stands of what was then called Schaefer Stadium as Clayborn returned three kickoffs for touchdowns in his rookie season.

“I can’t believe that was 40 years ago, especially since I still think I’m 35,” the owner joked.

“To the fans who voted for me,” Clayborn said, “I’ve always said Patriots fans are the best fans in the world. Y’all were able to finally able to make this happen. The fourth time was a charm!

“To Mr. Kraft and Coach Belichick, boy, I wish I could’ve played for the both of you. I would’ve won at least a couple of championship rings!”

The Patriots made a splash in free agency by signing twin brothers Cody and Jacob Hollister. Cody was a wide receiver from Arkansas and Jacob was a tight end from Wyoming. Jacob is more of a move tight end than a traditional inline tight end in the Rob Gronkowski, Dwayne Allen mold. He’s a project, a bit raw and needs to work on his blocking skills but as a receiver, he’s a very intriguing player. 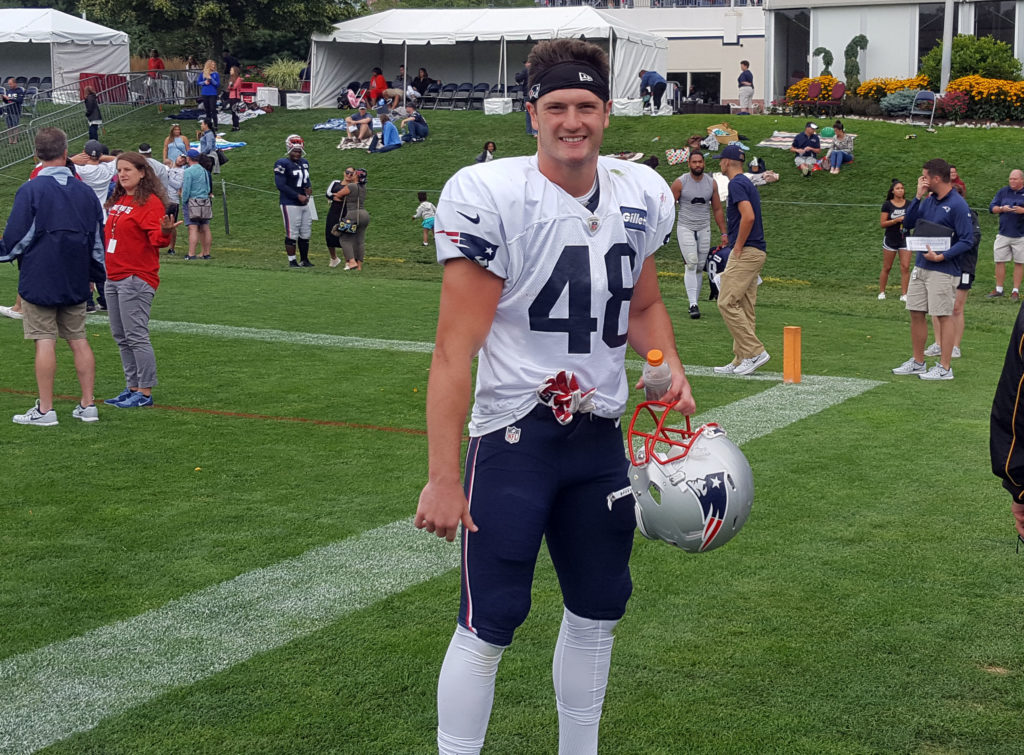 TE Jacob Hollister is an intriguing prospect as a “Move” tight end for the Patriots in 2017. (SBalestrieri photo)

The 6’4, 240-pound TE was signed for a guaranteed $90,000 so it shows the Patriots have hopes that he can make the roster. Wyoming moved him out of the slot, put him in the backfield as well as split out wide. He was a big play producer in 2016, targeted on pass plays of 20-yards or more downfield, he caught seven of eleven attempts for 189 yards.

At the conclusion of Saturday’s practice, we asked if we could sit down with Hollister for a few moments. He’s a very personable young player and here are a few excerpts from our conversation yesterday.

What are your first impressions of your first NFL Training Camp? “It’s going great,” he said. “I’m just trying to learn and get better every day and trying to improve on the little things, it is going great and has been a great experience.”

How are things going with the Patriots playbook which has a reputation for being hard to learn? (laughs), “I wouldn’t know about that, it is definitely a lot more than college. But it is a process, I feel like that you just have to pay attention to the details and take it day by day and let the everything play itself out.”

Where he was used as a bit of a deep threat in the Wyoming passing game could he see himself in a similar situation here we followed up with. “Ah yeah, right now I’m just trying to learn the playbook and play the way they want me to. I’m still in the learning phase of things and trying to hit on all the little things.”

We have noticed that you’re getting a lot of reps (with the first unit) on Special Teams. Is this something that you did a lot of in college? “No, I didn’t do a lot of it in college at all. They kept me strictly with the offense, especially since I was getting so many reps. But I love playing special teams and look forward to really playing a lot of them here. He added, “it has been really fun, I’ve been working with guys that have been doing that for a while. And again, it is a learning experience.

What are your impressions about the fan turnout here so far: “It is unbelievable. The atmosphere here at training camp is just awesome. This is like a game up in Wyoming. It has been really fun, the fans create this energy that carries over to the entire team. It has been really cool.”

As a rookie, you work with seasoned vets like Rob Gronkowski and Dwayne Allen. How have they been as a sounding board to you during your time here thus far? “Oh it couldn’t be any better. Those guys are great. We’ve been picking their brains and asking questions here and there about all the little things. And really just watching them, is what I’ve done a lot of. Watching how they handle situations and approach everything has been a great learning experience.

David Harris Shows Early Signs of Being a Steal:

When the Jets cut loose linebacker David Harris about a month ago, it raised some eyebrows especially among the Jets faithful as he’d always been a stalwart performer in the middle of the defense for a decade, a tremendous teammate and a steady veteran presence as a guy who always answered the bell. But there were also thoughts that he’d lost a step and may not be the player he was before.

While it is still very early in camp, Harris seems to be fitting in seamlessly with New England. The 11-year veteran is admittedly still learning the Patriots defense, but he seems to have some quickness still in his legs and he can still bring the pop in the middle of the defense. He had a couple of hits during Saturday’s session that could be audibly heard all over the field. Ever the consummate pro, Harris was playing down his veteran leadership presence after Thursday’s camp opener.

“They already have leadership here,” Harris said. “I’m just trying to come in and be a piece of the puzzle, that’s all. I’m trying to learn from guys like (Dont’a) Hightower, who plays the position at a high level for a long time and trying to pick their brains because I am kind of late picking up things. So I’m trying to make it as fast as possible and get on the same page.”

Thus far, the pickup of Harris, like that of Cooks looks to be an early steal for the Patriots. With Hightower on PUP, Harris is the veteran taking the starting reps with the defense.

While Hightower and Alan Branch are on PUP, the Patriots have a couple of their established veterans missing. And having Rob Ninkovich a no-show for the first three days of camp while he attends to what the Patriots are calling a “personal matter” just adds levels of intrigue to his situation.

Rumors abound that Ninkovich is contemplating retirement and in speaking with several people that are aware of the situation much more so than we are, it appears to be the case. We’ll just have to wait and see what the valuable and versatile Ninkovich ultimately decides.

However, the Patriots have announced that they’ll hold a press conference today at 12:15 p.m. after practice. Could he be calling it quits? It sounds like it.

Bills Move Lawson Back to DE and He’s Thriving:

The Buffalo Bills drafted Shaq Lawson in the first round last year and in Rex Ryan’s defense, he was playing outside linebacker which was a new position for him. Not surprisingly he struggled with it.

Under new coach Sean McDermott, the Bills are moving to a 4-3 and a slimmed down Lawson is back to DE and loving it. And making like difficult for the offensive linemen.The Bills edge rushers with Lawson and Jerry Hughes with Marcell Dareus and Kyle Williams inside looks to be a very disruptive group, something that never took off under Rex Ryan’s watch.

The Miami Dolphins has a new look defense especially at linebacker in 2017 and so far the results are encouraging. Lawrence Timmons who was brought over from the Pittsburgh Steelers led the way for the defense to dominate in Saturday’s training camp action. Timmons intercepted a pass and then lateraled to CB Bobby McCain for what would have been a touchdown.

Miami’s defense intercepted three passes on Saturday, Kiko Alonso also picked off Ryan Tannehill, who stared down his receiver and Alonso made him pay with his second pick in as many days.

“I met Collette over a year ago,” Bowles said Saturday to the New York Post. “She came to a few practices. Just talking to her over the course of time, her football knowledge is outstanding. It’s all male interns so far, and I thought it would be a good idea to bring in a female intern, strictly off of her skillset, not because she’s a female. She’s a hell of a football coach. We got to talking a lot, and she fits in with the guys. We gave her a chance.”

Smith is the third woman to coach in the NFL.