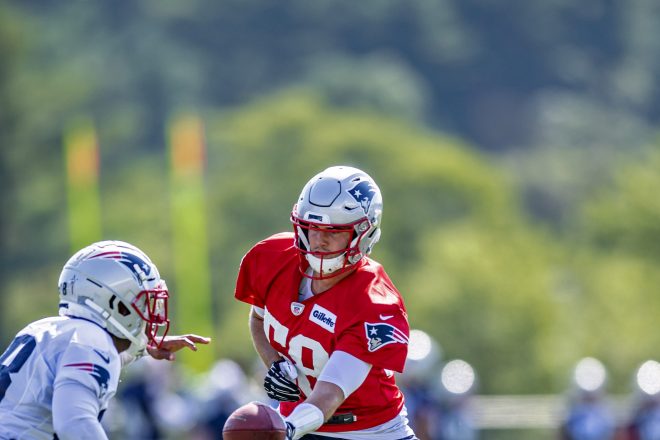 With Training Camp Set to begin, while I know the teams can’t hit until there are 17 practices in, these are the things I am looking at.

1) Quarterback Play – Cam Newton demands that you watch!  Is he back from his shoulder and foot injuries?  How is he meshing with the receivers?  Does he know the routes and the timing?  Can he improve his play action passing mechanics?  Newton will get the opportunity to go up against the finest secondary in the league every day in practice.  That will only help in the end.

I’m interested in the progress that Jarret Stidham has made in year two.  Will he compete for the starting job?  I hope so for the future of the team, especially given the injury history of Newton.  I was surprised that J’Mar Smith was cut if only from a workload perspective.  That’s a lot of throwing for just three QBs in camp.

2) Offensive Line – This may be the best competition in camp.  We have three rookies, two second year players, a couple of backups that we traded for.  For the first time they will have their entire starting OL in place.  How does David Andrews look coming back from his blood clot issues?  Is Isiah Wynn better coming off his injury?  How will the Patriots adjust from Marcus Cannon opting out for the 2020 campaign?  It’s also strange that there will not be any Pre-season games.  I wonder if the Patriots might consider broadcasting one of the in stadium practices since fans can’t go to training camp?

3) Second-Year Improvement – This is essential to the success of the team. Receiver N’Keal Harry battled a high ankle sprain and missed a good chunk of last season.   He was never able to get on the same page as now former QB Tom Brady (Brady’s fault as much as the rookie’s).  Chase Winovich will be called upon to step up in the absence of Kyle Van Noy and Jamie Collins.  Can Hjalte Froholt  get with the program and secure a backup spot with the heavy competition in camp?  JoJuan Williams has flexibility to play at CB or S.  Can he carve out more playing time?

Running back Damien Harris was invisible last season.  All the backs are back with Rex Burkhead taking a pay cut to stay.  I expect that we will see more of Harris with Newton as QB.  Receivers Jakobi Myers and Gunner Olszewski  are back and trying to make the roster again.  Myers will like Newton.  He tends to throw the ball high and at 6’5” that will help.  I have read that Olszewski was impressive during the spring sessions (online).  How that relates to actual practices remains to be seen.   Jacob Johnson is back after injury knocked him out.  There is an opening at FB with James Devlin’s retirement and with Dan Vitale deciding to opt out of the 2020 season.

4) Rookies- Draft Picks and UDFAs – For 16 straight seasons an UDFA has made the Patriots Opening Day 53 man roster. That’s why agents such as Drew Rosenhaus direct their UDFA to the Patriots.  This year Rosenhaus sent WR Jeff Thomas, a player with some red flags, to the Patriots.  A must read on Thomas was done by Henry McKenna of USA Today in his Jeff Thomas Story.  Further, Fox did a documentary called “89 Blocks” on Thomas’ East St Louis State Championship season.  Definitely worth watching.

I loved the Patriots trading back and taking S Kyle Dugger.  I was keyed in on Dugger since January and was pleasantly surprised Belichick would take a player from DII with his 1st.  Taking two relatively unknown TEs in the 3rd rd was also a surprise.   But given that Devin Asiasi played for new WR coach Jedd Fisch at Michigan and then followed him to UCLA, it shouldn’t surprise anyone he was taken by the Patriots.  Asiasi had the reputation as a very good blocker and underrated pass catcher.  Dalton “Rambo” Keene is likely to lineup anywhere.  He is a very good receiver and has running back skills for yards after the catch.  LB Josh Uche and LB Afernee Jennings may be called upon to start earlier than most rookies.

It was tough to see 7 UDFAs cut before the 1st on field practices.  The NFL ruled that in order to practice with a full squad the training camp rosters needed to be reduced from 90 to 80.  Thus QB J’Mar Smith and Brian Lewerke, WR Will Hastings, Sean Reilly and Isaiah Zuber, DT Courtney Wallace, and LB Kyavah Tezino never got on the field.

5) Linebackers – The Patriots may struggle at this position out of the gate, especially after we learned Dont’a Hightower has opted out for this season. Losing Collins, Van Noy and Elandon Roberts, and now Hightower, definitely hurts.  Second-year players need to step up.  Third-year player J’Whaun Bentley should be able to handle the 1st two downs.  Rookies Jennings and Uche may get opportunities on third down.  Don’t be surprised if UDFA De’Jon Harris fills the role of Roberts.  They are both under 6’ ILBs.  Patriots signed Brandon Copeland from the Jets and he may push for a job.

Be aware the Patriots have 31 players heading into Free Agency next season.  This may affect how the final roster looks.  Any veteran that is on the opening game roster has their salary guaranteed for the season.  Several UDFA received larger guaranteed salaries.  All but Isaiah Zuber ($90,000) were retained.   Jeff Thomas has one of the lowest guarantees ($2,500).  I think this will make him even hungrier.