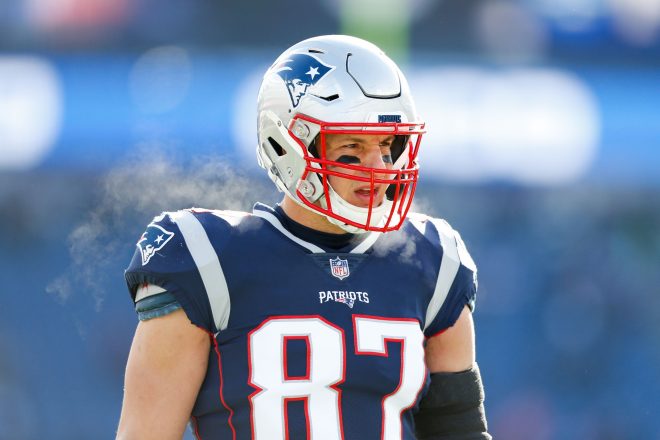 Check out his full interview below.

The appearance comes one day after Gronkowski made a formal announcement of his new business partnership with Abacus Health Products, a producer cannabidiol oil (CBD) that is used to treat pain.

Gronkowski revealed how his injuries effected him and the toll they took on his happiness.

“I’ve always had the mentality that I got to get up and do something,” Gronk said. “So, I’m still bringing that mentality to the next chapter to my life. I’m waking up, walking back and forth, I’m running a couple of sprints and I’m saying ‘Let’s go Rob! Let’s go! I got this, I’m confident today, I [have] energy.”

For fans still seeking a return to football, don’t expect it right away, downtime comes first.

“You need that downtime…I played football for 14 years, nonstop, in and out. I’ve been relaxing, letting my body heal. I still love to be active, [but] now it’s time to go out there and venture off.”

“I believe football has brought me to a place to where I am now: I’m stronger.”

Gronk offered up more praise for CBD, but also gave fans a glimmer of hope he may not be done yet.

“Through my experiences [CBD] has helped out tremendously, along with a healthy lifestyle,” he said. “I’ve been changing up everything, having new energy. I may be back!”

Presently CBD products are on the NFL’s banned substances list but Gronkowski intends to advocate for players to be allowed to use CBD for pain relief during and after their careers.