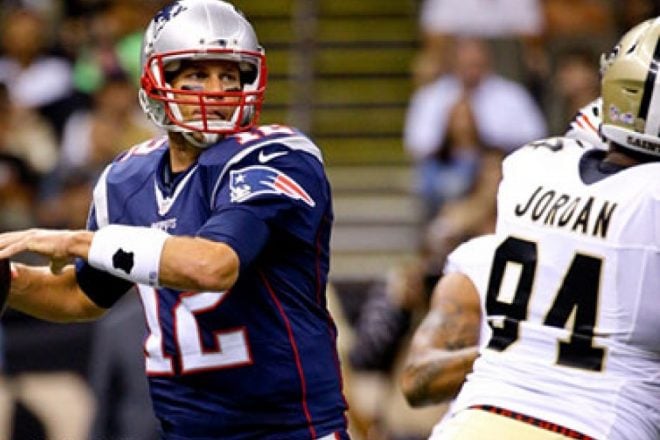 Man, it’s been a long offseason.

This week’s ruling should hopefully be the start of ending any discussion surrounding DeflateGate, but that hasn’t stopped those who have opted to continue trying to keep it alive and incite the fans that are trying to put it to rest.

New York Post writer Bart Hubbuch falls into that category and continues to bang the drum, seemingly in hopes of stirring things up and keeping this saga going. Hubbuch has been a good football writer in his coverage over the years, so it’s unfortunate that he’s in the group that is trying to irritate the masses, although it’s obviously perfect for his market since he’s covering a rival football team. However, tabloid-style newspaper, The New York Post, is one of the largest click-bait publications on the Internet so I understand the style of entry he was putting together and what he’s trying to accomplish.

In Hubbuch’s ongoing quest for truth and justice, he’s got some questions for Tom Brady that he’d like some answers to, and since he’ll never get his wish, I thought it would be fun to see if we can help him out.

1. Why did you destroy your cell phone? – That headline was one of the things that leaked out of the league office and was misconstrued, with Brady and his agent having already answered this question on his Facebook page when he released his statement following the commissioner’s public comments when this news came out:

“I also disagree with yesterdays narrative surrounding my cellphone. I replaced my broken Samsung phone with a new iPhone 6 AFTER my attorneys made it clear to the NFL that my actual phone device would not be subjected to investigation under ANY circumstances. As a member of a union, I was under no obligation to set a new precedent going forward, nor was I made aware at any time during Mr. Wells investigation, that failing to subject my cell phone to investigation would result in ANY discipline.”

One would likely believe that Brady’s hesitance in turning over his phone had less to do with anything involving the accusations and more to do with personal things he didn’t want to leak out. As it was, the league couldn’t handle any aspect of this mess privately without details leaking out and when they did, half the time they were incorrect and they didn’t bother to correct it. More importantly, the amount of texts, emails, and other personal messages that were turned over was massive and included plenty of other topics that made some noise. As we later found, the data turned over more than filled the required need and should have been enough. Not to mention the fact Brady was told they didn’t physically need the phone, only to later have the league go back on that. Most people at this point likely wouldn’t have been comfortable with giving up their cell phone either and the NFLPA certainly didn’t want Brady setting any new precedents.

2. Did you really not know what PSI was? – This question stemmed from Brady’s response when asked why he picked 12.5 as the air pressure number. “Ball pressure has been so inconsequential, I haven’t even thought about that,” said Brady in the transcript. “I think at the end of the day, the only time I thought about it was after the Jet game and then after this was brought up, after the championship game. It’s never something that has been on my radar, registered. I never said “psi.” I don’t think I even know what that meant until after the championship game. It was never something that even crossed my mind.”

As far as how they picked the “12.5” number, when asked how that came to be he said, “We looked in the rule book.”

Needless to say this is just Hubbuch being a little petty, since taking it from the context of the response, Brady was basically saying he didn’t really focus on the pressure on the footballs but simply didn’t want them at 16, which was where they were during a home game against the Jets that caused him to be a little tougher on the equipment guys and resulted in the subsequent texts of the guys complaining about him. His hesitance with his answer and the answer itself likely had to do with his concern of it being misconstrued. As we’ve seen, those concerns have ended up being well-founded.

3. Why did you give Jim McNally autographed merchandise? – Brady explained how common it is for people to request he sign items. “I get asked I would say on a daily basis to sign any number of things,” said Brady. “I think I told Mr. Wells I don’t think I have ever turned anyone down. So if someone asked, I signed whatever they would ask. Sometimes they would put it in my locker and walk away and there would be things there and I would just sign them. But if somebody asked for an autograph, I would give it to them.” Hubbuch seems like he’s reaching here, much like the league was with this premise. However, the real interesting thing would be to find out how many people in that locker room who contribute to the team receive autographed merchandise from Brady over the course of the season. That would probably surprise people, especially if the number is as high as Brady’s response would lead you to believe it is and McNally is likely one of many who received things from Brady.

4. Why did you not fully cooperate with Ted Wells? – That’s actually fairly easy to figure out. For those who have really followed this story closely, listening to Brady’s agent, Don Yee, the Super Bowl MVP’s agent’s responses following every ridiculous happening during this process tells you exactly how Yee felt about the accusations, especially if Brady vehemently denied them and was under his agent’s instructions in terms of how to deal with things from a legal standpoint. If Brady is truly innocent and this really came out of left field when he was first hit with it, which considering how he reacted on air on that fateful day on WEEI seems to be the more likely scenario, he probably didn’t take it seriously at first since he probably never imagined things would get to this point. It’s safe to say that the majority of people would probably agree with that.

5. Why did you not speak to the media for seven months after the Super Bowl? – This is just a ridiculous question, and Hubbuch has to know what the answer is because it’s easy to figure out. Follow Twitter, television, radio, and any other medium out there and listen/read what’s been said. It’s already even been so incredibly easy to manipulate official transcripts and spin them incorrectly, something the commissioner himself has already done. The more that Brady would have said, the more it could have been misquoted and as an experienced member of the media, Hubbuch knows that better than anyone.

Let’s be honest, none of the above is consequential at this point. If Hubbuch wants to continue the witch-hunt, he can ask someone inside the league office some questions worth really pursuing if he really wants to try and get down to the bottom of things. Here are two for suggestions:

1) On the pregame bathroom break – was that a frequent or fluke occurrence? – On that night before the AFC Championship, we know a bathroom stop was made as the footballs were brought out to the field, which included 100 seconds spent supposedly either deflating the balls and/or using the restroom. Goodell called this a “scheme” Brady was knowingly involved in, with the word scheme potentially signaling past transgressions that Brady supposedly knew all about. It would be interesting for the league to pull footage from the past few seasons at Gillette and find out if the pregame bathroom break involving a bag of footballs were a frequent or fluke occurrence. One would have to believe this has already been thought of (and maybe I’ve missed it), but we don’t give the league much credit given what’s already transpired.

2) Cameras obviously monitor the sideline – Have any of the Patriots players or staff on the sideline been spotted using needles to deflate the footballs on camera after the games began? – Again, this falls under the same premise as the above question and we’d have to assume the league already tried this. If not, go back and review every minute of the footage and see if anyone is spotted tampering with the footballs.

Those are two bigger questions that would at least give reason to keep from letting this go. Although there’s still no proof Brady would have had any knowledge of anything being done since no where within the texts did Brady ever ask for any rules to be broken.

And as much as Hubbuch complains about fans in New England, although, admittedly, anonymously cursing at him on Twitter and degrading him is a bit excessive, he has to realize that if this played out in his market, the local media, himself included, would try and give the benefit of the doubt and wouldn’t presume guilt with so little factual information to back it up. Of course there would be a couple writers to take the opposite stance (thanks for being that guy in New England Gary Tanguay…someone has to do it) but the majority would likely be more fair and would really need more facts than we’ve seen in this case to say that player is guilty. Unfortunately, Hubbuch’s stance is popular right now outside New England given where things are, so none of this is exactly shocking.

However, at this point, this horse has been beaten to death and unless he’s going to start grasping at something that could be a breakthrough and back up the accusations, he needs to finally let it go. Because honestly, it’s an act that after an entire offseason of this nonsense, is just becoming tiring. Although maybe it’s better than writing about the Jets and their myriad of problems, which I guess any Patriots fan would understand. We feel for you Hubbuch.