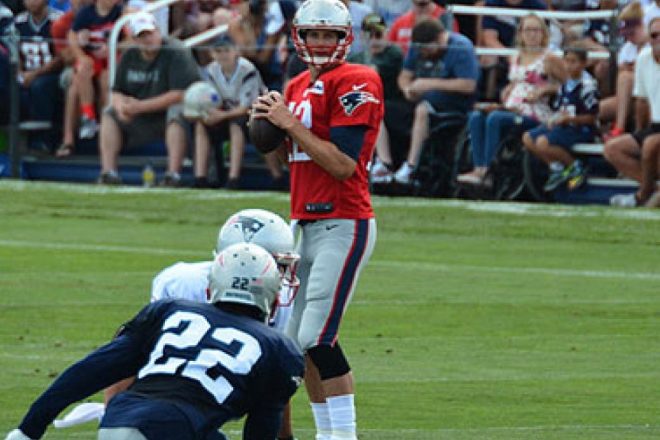 Check out some of the best social media sights and sounds below, including some photography from our own Steve Balestrieri who will be providing daily observations throughout camp.

Respect for the passion of Patriots fans, some of whom lined up for the first day of training camp at 2:30 a.m. Gates about to open for the team’s first practice. pic.twitter.com/zGnHsZUQsC

And we’re off! Here are the first runners in the gate at Patriots training camp. (I took the opening blindside hit of the season.) pic.twitter.com/GfxDpsyrTV

Stephon Gilmore first player on the field for Day One of #Patriots #TrainingCamp2018 @wbz #wbz pic.twitter.com/Ga057UFenZ

Tom Brady out for the start of his 19th #TrainingCamp with #Patriots – @wbz #wbz pic.twitter.com/WDXTzE4opf

Allow me to re-introduce myself… pic.twitter.com/1oApUNGIQV

🏈TOUCHDOWN!! 🏈#Patriots QB Tom Brady hooks up with @RobGronkowski for a touchdown at team's first practice of #PatsCamp Will it be the first of many this season??#Gronk #GronkhTV #TomBrady #WBZ #NFLTrainingCamp pic.twitter.com/kzE1IL2Gos

Patriots TC, mismatch Dorsett beats MFlowers to the corner of the endzone pic.twitter.com/1hP2VZtRsF

Patriots TC Day 1, Julian Edelman was running with no brace on his knee pic.twitter.com/Pkm01FHhqY

Patriots TC Day 1, Gilmore knocks it away from Hogan. pic.twitter.com/LObIMDoBpU

Patriots TC Day 1, Nice to see Hightower back on the field. WIth Gilmore and DMac pic.twitter.com/G6f5mkVlTX

Danny Etling getting some extra work in with the Patriots’ young receivers and DBs. Hit Braxton Berrios on this one. pic.twitter.com/WML7pCcU6G

What is it like for players to have their son run into their arms after the first practice of training camp. @McCourtyTwins (J-Mac), with son Kaiden, explains. pic.twitter.com/8Frrvkbahb

One thing I won’t miss about being a rookie at training camp…carrying @WillieMcGinest pads. I might’ve dropped them a few times on purpose. 😂

Chris Hogan taking the time to sign and spend time with the fans once practice was over. #WBZ pic.twitter.com/9UEsA1spvX

GRONK CONTRACT 💵💰#Patriots TE @RobGronkowski is asked about getting a new contract and the possibility of holding out of camp for a new deal. #WBZ #PatsCamp #NFLTrainingCamp #NFL #GronkhTV pic.twitter.com/hTiNKWJ9Kp

Stephen Gostkowski teaching a kid how to ride a bike at Patriots Training Camp, part of the Pats and Carmax delivering bikes to Blue Star military families. #WBZ pic.twitter.com/DOBPDJYn5L

How Was This Article?
Posted Under: Patriots Twitter
Tags: 2018 Patriots Training Camp

By: Robert Alvarez
Check out the Patriots mini-documentary highlighting Richard Seymour's football journey to becoming a Hall of Fame player.
30 mins ago

By: Ian Logue
Patriots news for Monday 8/8 along with some additional team notes.
4 hours ago