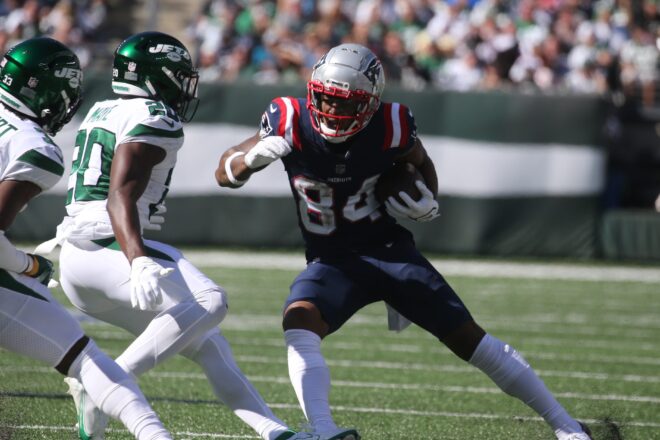 After career years for both of the New England Patriots’ leading wide receivers of a year ago, it appears the duo has even higher expectations for 2022.

On Tuesday, Kendrick Bourne took to Instagram and shared a photo of himself and Jakobi Meyers alongside a caption that appears to be one of their goals on the field this fall, each reaching 1,000 receiving yards.

“1k each for me and my dog?” Bourne wrote in the post and tagged Meyers’ account. “What y’all think?!!”

Fellow wideout Devante Parker later commented on the post, joking “just save some for me and we good”.

Kendrick Bourne has high hopes for himself and Jakobi Meyers this season (with an especially funny reaction from Damien Harris). pic.twitter.com/0wx2bbiKLO

Last season, both Bourne and Meyers each recorded over 800 total receiving yards, so reaching their goal is quite realistic.

The last time the New England Patriots had two receivers reach the 1,000-yard mark in the same season? 2017 with Rob Gronkowski and Brandin Cooks.

Running back Damien Harris also chimed in on the post, joking Bill Belichick won’t be happy to see a player discussing individual stats.

For now, the ambitious goals of the Patriots wide receiver corps look great for the growth of second-year starting quarterback Mac Jones.

By: Russ Goldman
In this episode, Steve and Derek break down the 2022 Patriots regular season schedule. The guys also discuss Vince Wilfork's election into the team Hall…
7 hours ago