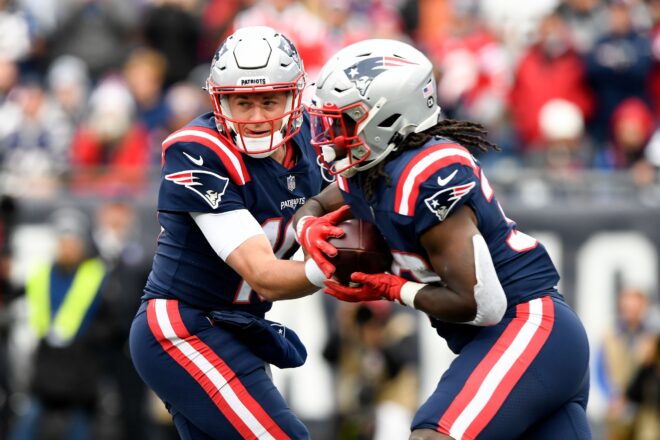 The New England Patriots returned home on Sunday to take on the Cleveland Browns who also came into the matchup with an identical 5-4 record.

Notable lineup changes saw tackle Trent Brown return to the offensive line for the first time since week one after sustaining a calf injury and rookie Rhamondre Stevenson starting at running back due to Damien Harris recovering from a concussion he sustained last week.

Take a look at all of the best postings and moments shared across social media before, during, and after the game below by members of the team and local media below.

They look pretty high up from here…..coulda sworn they were feet over the stadium….crazy https://t.co/pfwNAdrYHN

Some big "going for 4 in a row" energy with Mac Jones' runout today pic.twitter.com/07lib6SNbk

In the first quarter, the Browns struck first when quarterback Baker Mayfield found tight end Austin Hooper to give the visitors an opening drive 7-0 lead. Running back D’Ernest Johnson led the way for Cleveland thanks to his 58 rushing yards on the drive. That yardage was the second-most ever given up by the Patriots on an opening drive under Bill Belichick.

Despite the tough start, the Patriots like many other times this season weren’t phased and responded with their longest opening touchdown drive in the Belichick era.

Quarterback Mac Jones would find Hunter Henry to knot the game at seven all through one-quarter of play.

The Browns looked to respond back to open the second quarter, but second-year safety Kyle Dugger’s strong season continued when he picked off Mayfield to set up the Patriots first lead of the day.

Kyle Dugger: 3rd interception of the season. He also leads the team in tackles (53).

A Rhamondre Stevenson rushing touchdown put the Patriots ahead 14-7 and they wouldn’t look back.

Mac Jones with the 26-yard DIME to Jakobi Meyers on third-and-9. Impressive stuff from the rookie on a drive that ended with a 🎯 to Kendrick Bourne. pic.twitter.com/APTSpFroei

The dime to Jakobi Meyers helped set up what may be the best throw and catch of the season (so far) for the Patriots on this touchdown pass by Jones to Kendrick Bourne.

From @ESPNStatsInfo: Patriots' third 99-yard TD drive under Bill Belichick, with each of the previous 2 coming during the 2011 season (Week 1 at Dolphins, Week 2 vs Chargers).

What a shot of the Kendrick Bourne touchdown catch. (via Adam Glanzman/Getty Images) pic.twitter.com/81iLYaU64c

The touchdown to Bourne plus an additional Nick Folk field goal gave the Patriots a commanding 24-7 lead heading into halftime.

As both teams returned to the field for the second half, life didn’t get much better for the Browns offense as the Patriots defense continued to shut them down.

The Patriots offense meanwhile, continued to shine as they looked to put the game away.

A Rhamondre Stevenson rushing score, his second of the day, pushed the Patriots lead to 31-7 through three quarters.

TWO FOR THE ROOK! Rhamondre Stevenson with his 2nd TD of the day! #Patriots pic.twitter.com/Mf4QieZuRt

I need to work on my referee skills after watchin this! 😂😂 pic.twitter.com/ABXQ13wFUF

The dominance by New England on all phases continued into the fourth, as Mac Jones iced the win with his first career three-touchdown game.

9.5 sacks on the year now for Matthew Judon, tying his career high.

From @ESPNStatsInfo: Hunter Henry's 7th receiving TD this season are the most through the Patriots' first 10 games since 2015 (both Rob Gronkowski and Julian Edelman did it that year).

Now leading 38-7 with seven to go in the fourth quarter, Jones’ day was over as Brian Hoyer stepped in under center to finish it off.

He catches. He runs. He runs and catches.

Despite the game being now well out of reach, the play of the day came in garbage time when at long last Jakobi Meyers found the end zone for the first time in his career as his teammates and fans erupted in celebration.

Most receiving yards ever without a TD and on his 135th catch, Jakobi Meyers finds the end zone. Congrats @jkbmyrs5

@jkbmyrs5 yeahhhhh! It’s about time! 🤣Happy for you!

Congrats to Brotha Meyers… that corner end zone was were I scored my first NFL TD as well…. 😎😂 #ForeverNE

More than half of the #ForeverNE rushed into the end zone to celebrate Jakobi Meyers TD catch is all you need to know about how much this Patriots team is absolutely jelling together the last 4 weeks #NFL pic.twitter.com/thrK5yEAXD

The Patriots would go on to defeat the Browns by a final score of 45-7 to win their fourth game in a row.

"He was dialed in… The kid works really hard and he's continuing to get better every single week."

Another milestone day for BB. pic.twitter.com/zh5KPm2hvU

"Overall a great team win, that's how you want to play the game of football."