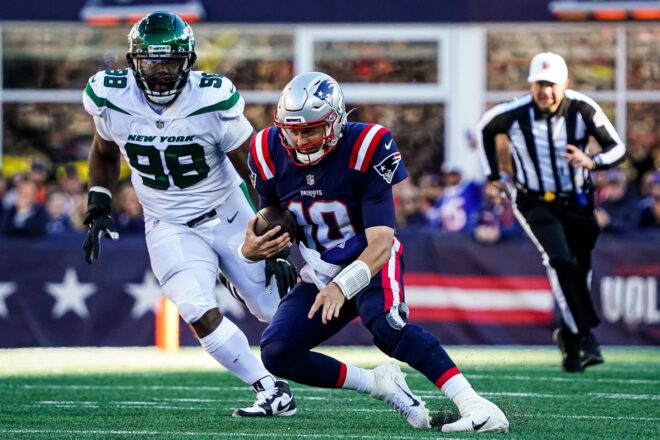 The New England Patriots looked to get a much-needed win in week seven against a struggling Jets team at Gillette Stadium.

Offensively, the Jets entered Sunday scoring a league-low 13.4 average points per game under first-year quarterback Zach Wilson. Back in week two, the Patriots won their first game of the year in blowout fashion over the Jets at MefLife Stadium in New Jersey by a 25-6 score.

Could the Patriots duplicate their success against their division rivals? Take a look back at the game through all the best postings shared across social media as they unfolded below.

Richard Seymour gets some love from Josh McDaniels. The Pats will honor their newest HOF inductee at halftime. Big Sey with the big red jacket! pic.twitter.com/ekbmNBrfdg

In the first quarter, the Patriots offense unleashed some trickery when wide receiver Nelson Agholor hauled in a 25-yard touchdown pass from Kendrick Bourne for the early lead.

DAME TIME!!! Damien Harris caps off a dominant drive for the touchdown! The Patriots are running all over the Jets! #LFG pic.twitter.com/L412DhVIKd

Back in action for the first time after two healthy scratches, running back J.J. Taylor showed off the ability that dazzled many during training camp.

After one quarter of play, kicker Nick Folk hit a career milestone to open the second, nailing a 39-yard attempt for his 300th made field goal.

Midway through the second, the Jets finally got on the scoreboard thanks to a Corey Davis touchdown reception from quarterback Mike White, who replaced Zach Wilson following a hit by Matthew Judon leaving him with a right knee injury.

Leading 17-7 with seven minutes to go in the second, Mac Jones showed off his running ability on a third long. He was predictably pumped up after getting the first down.

MAC JONES WITH THE WHEELS! pic.twitter.com/R7YUpc8fTI

The play helped setup a Brandon Bolden 15 yard touchdown pass from Mac Jones to extend the Patriots lead to 24-7.

With the clock winding down on the first half, Hunter Henry celebrated “National Tight Ends Day” the right way by hauling in yet another touchdown pass to put the Patriots up 31-7 just before halftime.

For the first 6 weeks of the season, DT Daniel Ekuale was flying under the radar on the practice squad … and so you can imagine what his reaction might have been when teammates (Wynn, Bourne, Andrews, Wise, Mason) swarmed him after his half-ending sack (courtesy CBS broadcast). pic.twitter.com/DP3Vyd4ATr

At halftime, the Patriots held a special ceremony honoring its newest inductees to the team Hall of Fame.

You can view the full ceremony in its entirety right here below.

Defense wins championships. @BigSey93 soaks it all in and recognizes the “Defense!” chants from behind the stage. pic.twitter.com/8wsiWiOciv

To open the second half, the Jets found the end zone for the second and final time of the game when Elijah Moore scored from 19 yards out, a two-point conversion attempt failed. The score was now 31-13 still very much in favor of New England.

A drive later Nick Folk added his second field goal of the game, this time from 50 yards (a first this season).

Meanwhile on defense, the Patriots secondary continued to pick apart Jets backup quarterback Matt White and the rout was on.

From @ESPNStatsInfo: J.C. Jackson has his 20th career interception. Each of his last 4 have come against the Jets, including all 3 this season.

Patriots cornerback J.C. Jackson stands with five interceptions over his last four meetings with the Jets, beginning against quarterback Joe Flacco in November 2020.

In the fourth quarter, the Patriots put the game well out of reach as Damien Harris scored for the second time and J.J. Taylor added two touchdowns of his own. Mac Jones meanwhile went over 300 yards passing for the first time in his career as the Patriots went on to win in dominating fashion by a final score of 54-13 to get back within a game of .500 at 3-4.

The victory marked the Patriots 12th straight win over the Jets and their first win at home this season, they’ll look to put together their first winning streak of the year when they travel to Los Angeles to take on Justin Herbert and the Chargers next Sunday.

David Andrews on Mac Jones 300 yard day: “Same thing I say every week; it’s a joy to get to work with him…it’s been fun to see how he sees the game. He does a really good job for us, he’s a really smart kid for a rookie.” #Patriots

“Probably the fastest I ran all game,”
Damien Harris says smiling, before adding: “You see a young guy have that success, and have that hard work pay off, it’s a great feeling.” https://t.co/RwqN5eze8z

JJ Taylor scores his second touchdown of the game and the Patriots have 54 points today.

This is the Patriots' ninth 50+ point performance of the Bill Belichick era. pic.twitter.com/iTVfmncepa

Happy coach: Bill Belichick is going up to every player on the Patriots sideline during this break and shaking each of their hands.

It probably took a bit longer than he hoped, but Mac Jones gets his first W at Gillette and shares some gear with a lucky fan pic.twitter.com/4BrGIVGakj

“We all needed that one, everybody…all of Pats Nation, including us.”

You hate to see injuries. Especially if you’re apart of them. I’ll be praying for you @ZachWilson. ✊🏾✊🏾

Have a day, @DHx34 ‼️ pic.twitter.com/UqYgfqw9mg

By: Ian Logue
Some quick New England Patriots news and notes on this Wednesday.
11 mins ago