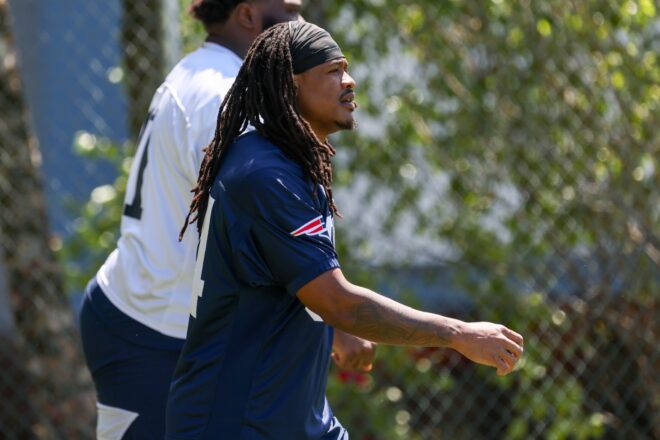 The Patriots were back at it Tuesday on the Gillette Stadium practice fields for day six of training camp, but this time the feeling of “real football” was in the air as the players sported pads for the first time.

A notable observation saw Cam Newton separate himself from Mac Jones in the quarterback battle, as Jones struggled with accuracy and reading coverage. He also threw two interceptions during competitive drills and nearly had a third that Anfernee Jennings dropped.

PatsPulpit’s Ryan Spagnoli logged the total completions for both quarterbacks.

Light throwing day for both QB’s but Newton was by far the best on the field today. Jones struggled in 11’s going just 2 for 6 with a dropped INT from Jennings.

Check out how the full session unfolded through all of the best sights and sounds shared across social media from the team and local media outlets below.

Welcome to the NFL. pic.twitter.com/bDWcNFZJgq

Bill Belichick gathered the entire team together before the start of warmups and spoke for a minute or two. First time we've seen him do that this summer.

Cam Newton and Kendrick Bourne are pumped for the first day of full pads at #Patriots camp. Follow @ezlazar for coverage from Foxboro.

Kyle Dugger works on dropping into the deep half. #Patriots

Cam Newton: a man of the people. pic.twitter.com/k9ObfVVGgo

Mac Jones airing it out on the first day of #Patriots padded practice 💪 pic.twitter.com/0yywfn74zW

The #Patriots QBs jump into the middle linebacker spot for a drill. Mac has the number and Cam has the footwork. Belichick does love flexibility. pic.twitter.com/TBQlMBQffZ

"Physicality is one of the most important things in the game…to get back to that felt good."