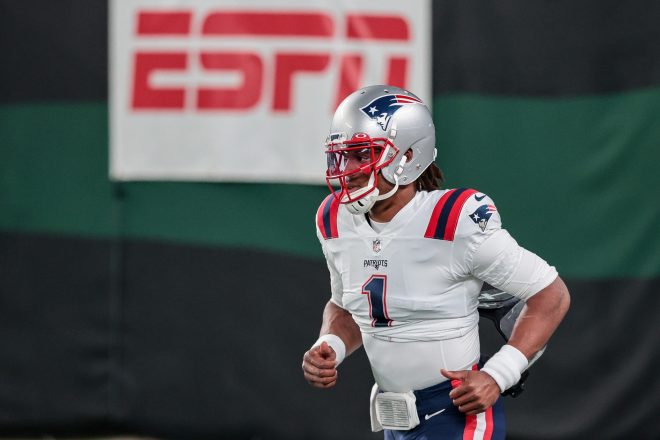 The New England Patriots entered their Week 9 matchup with the rival New York Jets seeking to end their four-game losing streak, a first since the 2002 season.

Take a look back at all the best sights and sounds from social media before, during, and after the game below.

“In the middle of difficulty lies opportunity.” Go get after em fellas. #GameDay #family #MNF

In the first quarter, both offenses struggled to get much going, but for the first time all season, the Patriots finally scored a touchdown in the quarter.

A 35 yard field goal by Sergio Castillo folllowed by a Cam Newton 5 yard run were the only points scored.

The Patriots led 7-3 after one.

.@CameronNewton stretches for the score.

In the second quarter, old Patriots foe Joe Flacco began his attack on the Patriots secondary.

A Breshad Perriman 50 yard pass from Flacco followed by a Castillo 50 yard field goal gave the Jets a 13-7 lead midway through the period.

Right on the money.

A Nick Folk 45 yard field goal cut the Patriots deficit to three at 13-10 but again the Jets quickly answered.

A Jamison Crowder 20 Yd pass from Flacco gave the Jets a stunning 20-10 lead heading into halftime.

In the third quarter, Newton and the offense battled back.

Rex Burkhead capped off the drive with a one-yard run to bring the score back within three at 20-17.

SEXY REXY! Rex Burkhead into the end zone! The Patriots make it a 3 point game! pic.twitter.com/8csPrnfVP0

Needing some sort of spark trailing by ten to open the fourth, Newton delivered with some vintage plays.

A Nick Folk 29 yard field goal brought the Patriots within seven at 27-20.

Needing a big stop on defense, JC Jackson delivered with six to go in the game.

J.C. Jackson joins Devin McCourty and Mike Haynes for the franchise record for consecutive games with an INT (4) https://t.co/FtPONkobTW

The Patriots would cash in on the turnover to tie the game at 27.

With under four to go in the game, the Patriots defense forced a quick punt, giving Newton and the offense just enough time to win the game.

A Nick Folk 51 yard Field Goal with the clock winding down gave the Patriots a dramatic come from behind victory to snap their losing skid.

Cam is so happy and I am even more happy for him, I love this dude pic.twitter.com/gG2rjIeX2z

That's the most completions to undrafted wide receivers by any QB in a win in the Super Bowl era.#GoPats

Helluva game @CameronNewton!!!! Big time all night long! 🙏🏾. Game winning drive to add on to it

Cam Newton on being a more efficient as a passer over the last couple weeks:

"I'm getting tired of sucking. It's simple. As a competitor, you know what your standard is… I just did my job today, and that's what it's supposed to be each and every week." pic.twitter.com/wisGLeDpWA

Feels good to come home with a dub!

Jakobi Meyers 169 yards are the 12th most ever by a Patriots receiver in a single game.

From @ESPNStatsInfo: Jakobi Meyers had 8 receiving first downs. That's the most by a Patriots wide receiver since 2014 (Brandon LaFell – 8)

Patriots receivers with 12 catches and 169 yards in the Belichick era, per @pfref:

Good comeback win on the road last night. What a birthday for my guy @kobi1116 #GoPats

By: Steve Balestrieri
“I think they’re a 12-win team,” Ninkovich said on Greg Hill’s morning show. “Listen, six months ago I thought they were a nine-win team.
8 hours ago