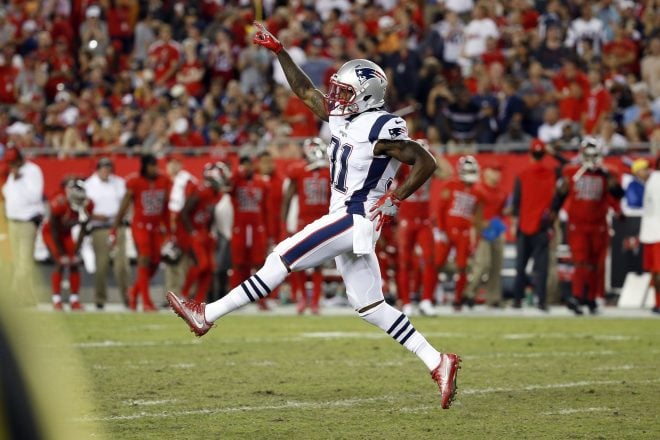 Patriots training camp has seen Jonathan Jones as one of the most consistent performers in their defense, with Jones playing like a player who knows this is his chance to earn a bigger role in the team’s secondary.

He had plenty of terrific moments, and here’s a rundown of what’s been written about him:

“Jonathan Jones stood out among his peers on Thursday. The slot cornerback intercepted Brady in 2-on-2s. In 11-on-11s, he deflected a Brady pass. Both plays happened with him covering Braxton Berrios. Also deflecting passes were Jackson, Crossen and D’Angelo Ross.” – Mark Daniels, Providence Journal – 7/25/19

“Jones, who’s competing for a starting job in the Patriots’ base nickel defense, was a standout in practice. He intercepted Brady during 2-on-2 drills in a target to wide receiver Braxton Berrios. He broke up another Brady pass to Berrios.” – Doug Kyed, NESN – 7/25/19

“Jones made a nice interception in two-on-two work, as Brady tried to fit a fade to Berrios in the right corner of the end zone. Jones had strong coverage throughout the play and appeared to have his way with Berrios in several matchups.” – Jeff Howe, TheAthletic – 7/25/19

“Jones matched up against Braxton Berrios on a couple of occasions and blanketed him. The first resulted in a terrific interception as he was able to get position on Berrios and made the leaping catch.” – Paul Perillo, Patriots.com – 7/25/19

“Cornerback Jonathan Jones intercepted Brady’s first throw in competitive reps (a 2-on-2 drill). The pass was intended for second-year receiver Braxton Berrios. Jones showed up again with a deflection on a pass from Brady to Berrios in an 11-on-11 drill in the red zone. These weren’t the only misfires from Brady to Berrios.” – Henry McKenna, USA TODAY – 7/25/19

“Jonathan Jones, who played a key role in both the Super Bowl and the AFC Championship, was the standout from Day One. He intercepted Tom Brady during a 2-on-2 goal line drill. Brady threw a fade for receiver Braxton Berrios, and Jones high-pointed the ball and came down with the pick.” – Kevin Duffy, Boston Herald – 7/25/19

“Jones was one of the biggest stars of the day on defense breaking up several passes, one of which was thrown by Brady in the end zone.” – Ryan Hannable, WEEI.com – 7/25/19

“Jones continues to have a strong camp and he finished with two pass breakups on Brady in full-team drills. ” – Mark Daniels, Providence Journal – 7/31/19

“Jonathan Jones made a really nice play of breaking up a pass intended for Berrios. Jones is having an outstanding camp thus far. Perhaps only Gilmore is playing better in the secondary right now.” – Steve Balestrieri, PatsFans.com – 7/31/19

“CB Jonathan Jones broke up a pass intended for Ben Watson. Jones has been arguably the best defensive player on the field in camp. He is playing like a man who knows the Patriots could get rid of him at no cost whatsoever. He needs to prove he belongs over younger, cheaper options, and so far he has done that.” – Matt Dolloff, 98.5 The Sports Hub – 7/31/19

“Jonathan Jones made a nice pass breakup against Braxton Berrios. Tight coverage all the way over the middle and got an arm in to disrupt the catch.” – Matt Dolloff, 98.5 The Sports Hub – 7/31/19

“Not sure you’ll find many other players who have had a better or more consistent camp than Jones. He’s been dominating in the slot and has been a real pain in Braxton Berrios’ rear end.” – Greg Bedard, Boston Sports Journal – 8/02/19

“Jones is also giving receiver Braxton Berrios fits. He broke up a target intended for Berrios on Friday, and Berrios was deeply frustrated. It was a simple crossing pattern, which seems to get broken-up on every target for Berrios. ” – Henry McKenna, USA TODAY – 8/02/19

“CB Jonathan Jones broke up a pass intended for Berrios in this session. He’s been one of the best players on the field in camp. The way he’s playing, he easily looks like the starting slot corner.” – Matt Dolloff, 98.5 The Sports Hub – 8/02/19

“Jones hasn’t had a down day yet. He’s arguably been the Patriots’ most impressive player in training camp.” – Kevin Duffy, Boston Herald – 8/02/19

“Jonathan Jones’ strong camp continued as the slot corner made a terrific diving deflection to knock down a pass intended for Chris Lacy during 7-on-7s.” – Paul Perillo, Patriots.com – 8/05/19

“It was a tough day for both slots, but Jones had the rougher day as he was victimized by Danny Amendola and others several times as the Lions had a good day on offense.” – Greg Bedard, Boston Sports Journal – 8/06/19

“Jonathan Jones, who has been outstanding during camp, lost a battle with Danny Amendola on a cross route for a third-down conversion. ” – Paul Perillo, Patriots.com – 8/06/19

“Cornerback Jon Jones is a nightmare for receiver Braxton Berrios, who has struggled to separate from Jones all throughout training camp. ” – Henry McKenna, USA TODAY – 8/12/19

“Jonathan Jones spent some time early in practice returning kicks. Jones can absolutely fly and would seem to be a great candidate to fill a role that doesn’t have an obvious candidate.” – Paul Perillo, Patriots.com – 8/13/19

“Titans wide receiver Adam Humphries was among those who left practice early. Humphries didn’t do much against a dominant Patriots secondary. He had one opportunity for a big play, but let the ball bounce off his chest and to the ground on a deep route. Humphries had beaten Jonathan Jones on the play.” – Kevin Duffy, Boston Herald – 8/14/19

“Jon Jones had some up and down moments during a seven-on-seven period. He showed off impressive instincts by anticipating a check down, peeling off his man, and then breaking up a pass intended for Taywan Taylor. Jones was later beaten on a touchdown pass to Jennings.” – Jeff Howe, The Athletic – 8/15/19

“Stephon Gilmore and A.J. Brown, a rookie wideout out of Ole Miss, got a bit heated about midway through practice during some 11-on-11 work. The two were lined up to the offensive right side but Marcus Mariota’s throw went the other way. That didn’t stop the two from getting into as Devin McCourty, Jason McCourty and Jonathan Jones also came over to get involved.” – Paul Perillo, Patriots.com – 8/15/19

By: Mark Morse
Both games are in the books and we have learned about several players we have not seen play.  The practices leading up to the games…
45 mins ago