4 years ago at 9:10 am ET
Follow @SteveB7SFG
Posted Under: Patriots Commentary 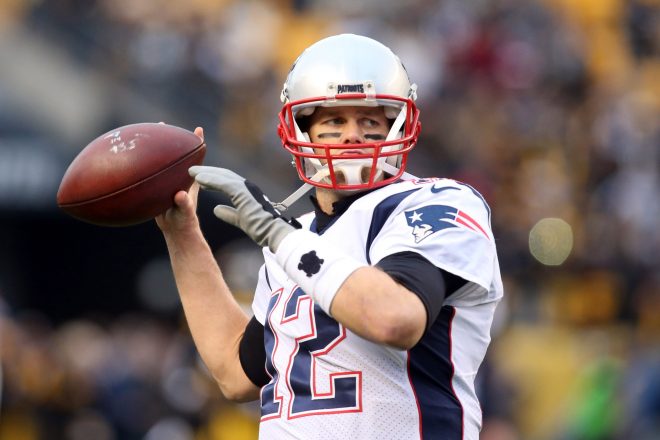 Playoffs Start Early For Both Teams

The New England Patriots head to what seems an annual trip to Pittsburgh to take on the Steelers in a very important game for both teams. The Patriots, courtesy of a bizarre last play of the game in Miami blew a golden opportunity to take over the #1 seed if they win tomorrow. The Chiefs were beaten by the Chargers in another wacky finish and New England owns the tiebreaker with KC.

Pittsburgh is reeling right now at 7-5-1, having lost three in a row including the last two in bizarre fashion. Their lead in the AFC North is down to just a half-game over the Ravens and with the Patriots and Saints back-to-back in the next two weeks, the playoffs start now for the Steelers.

Most times the old cliché, “Player A owns Team B” is really overused and just that a cliché. But in this instance, it is really hard to make that argument. Brady overall is 11-2 against the Steelers but since 2006, he’s 7-1 against what is always one of the best teams in the AFC. In the last four regular-season meetings, Brady has thrown 11 TDs, just 1 INT, completing 70.6 percent of his passes for 1240 yard (an average of 310 yards per game and 9.84 per pass) for a passer rating of 127.7.

The Steelers haven’t changed the way they approach the way they play defense against Brady and the Patriots since Brady’s first matchup with them back in 2001 playoffs. The only time they really changed things up was back in the 2011 season, a Steelers 25-17 win. They rely on their pass rush getting home and creating pressure. The Steelers are 2nd in the NFL with 45 sacks on the season. T.J. Watt has 10 and they have four players with five or more sacks.  But against the three best QBs they’ve faced this season (Patrick Mahomes, Philip Rivers, and Matt Ryan), they’ve allowed 910 yards, 8 TDs 0 Ints for a passer rating of 126.7.

Brady has always known how to attack this Pittsburgh defense, it holds no allusions for him. Unless they change the way they approach things tomorrow, there is no reason to believe that the trend won’t continue.

The Patriots big tight end has had unprecedented success against the Steelers as well as Brady. In six career games against Pittsburgh, Gronkowski has reeled in 39 catches, 664 yards, and 8 TDs. His 110.6 yards per game average is the most he’s had against any team that he’s played more than once.

The Steelers defense has struggled against tight ends. Travis Kelce earlier in the season hurt them for seven catches, 109 yards, and 2 TDs. Last week, they played five different defenders on Raiders tight end, Jared Cook and still couldn’t stop him as he had seven catches for 116 yards. Gronkowski took over the game in the fourth quarter a year ago in Pittsburgh hauling in 9 passes for 168 yards and a two-point conversion.

The Steelers have said that they’re going to change up the way they cover Gronkowski this week and may switch up their looks on the big tight end. With lingering back and ankle injuries, he’s been slowed considerably this season. But bad news for the Steelers this week?  He had arguably his best game of the season against Miami last week catching 8 passes for 107 yards and a touchdown.

The Patriots best cornerback will have his work cut out for him this week. The Steelers have several excellent targets in the passing game. But Gilmore will be worried about the just the top two, JuJu Smith-Schuster and Antonio Brown. We’d expect that Gilmore will be covering both at times on Sunday and neither will be an easy receiver to shadow. Brown has been the Steelers go-to guy since he entered the league but this year, Smith-Schuster has had more receptions and yards.

Gilmore is having a fantastic Pro-Bowl-type of a season for the Patriots and has been their best at covering the opposition’s best wide receiver this year. Pro Football Focus had him as their 2nd rated CB on 3rd or 4th down this season behind just Marlon Humphrey of the Ravens. An interesting tidbit via Jeff Howe of the Atlantic. The Patriots are 8-0 when Gordon doesn’t allow a TD and 1-4 when he does. Gilmore is currently tied for 3rd place among all CBs with passes defensed with 13.

The feeling here is that Gilmore will go one-on-one with Smith-Schuster which should be a fascinating matchup to watch. He does better against bigger receivers and Smith-Schuster is 6’1 while Brown is 5’10. I’d expect Brown to be doubled with a corner and a safety. Eli Rogers is expected to be back this week which will be another tough matchup.

The Patriots big wide receiver is someone who has had pretty good success against the Steelers in the past and played them often while a member of the Browns. Included in that was a 17-yard touchdown late in regulation that tied the opener, which ended up in a tie. Now he’ll be going with a much better cast of characters against the same Steelers team that he’s faced before. And with a much better quarterback.

Gordon has gradually learned the Patriots offense on the fly since making his first appearance in the Week 4 game against Miami. And since then, he’s put up some very decent numbers (39 catches for 701 yards and three touchdowns) which is very impressive considering he had to learn the Patriots offense in mid-stream. How many WRs have struggled here after having an entire offseason to learn the WR route tree? Gordon’s 18-yards per catch average is the best among NFL WRs since Week 4. And that is troubling to Pittsburgh Defensive Coordinator Keith Butler. “Shoot, he’s a big man that can run,” he said. “He’s a deep-ball guy. If you look for anybody that’s going deep for them, it’s probably him.”

With the Steelers putting a lot of stock in slowing down Gronkowski this week, that will mean a lot of single coverage on Gordon. And this might be the time for him to have that one big monster game that has been lacking from his resume this season.

The Patriots captain and their center fielder at the back end of their defense will have to have a big game on Sunday against a very potent Steelers passing attack. Between Brown and Smith-Schuster they have two of the more explosive wide receivers in the game. Added into the mix is Eli Rogers who tore his ACL in the playoff loss to Jacksonville last year and has spent the season on PUP. Now he’s healthy and is expected to be activated for Sunday’s game. That gives McCourty, even more, to be worried about on the back end.

Rogers career high for catches and yards? The 2017 AFC Championship Game against the Patriots where he caught seven passes for 66 yards. He’s someone that will have to be on the Patriots and McCourty’s radar if he gets his hands on the ball.

One of the more underrated aspects of McCourty’s game and that of the Patriots defense is tackling. This week, in particular, the Patriots have to limit the YAC (yards after the catch). When they’ve been successful, they’ve not allowed teams to run after they’ve caught the ball. McCourty will be a big, big part of that this week.