4 years ago at 7:00 am ET
Follow @SteveB7SFG
Posted Under: 2018 Patriots Regular Season 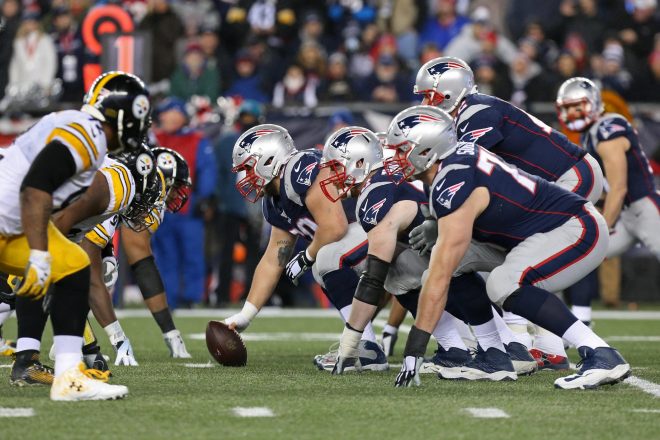 Patriots-Steelers Key Matchups, Who Has the Razor’s Edge?

The Patriots go back on the road for their final regular season road game of 2018 with a trip to Pittsburgh to take on the Steelers. This is, in essence, a playoff game for both teams. Each needs to win to try to lock down the #2 seed.

For Pittsburgh, it is even more important as they’ve dropped three in a row and their lead in the division has dwindled to just a half-game over the suddenly surging Ravens. By the time that the game starts, they should know the results of the Ravens-Bucs game. However, Baltimore ends the season with games at the Chargers and home against the Browns who are playing much better. Pittsburgh has New England this week, New Orleans next week and then the Bengals.

This week’s game will be broadcast by CBS on Sunday, December 16 at 4:25 p.m. ET and can be seen locally on WBZ-TV Channel 4 in Boston. Jim Nantz will handle play-by-play duties with Tony Romo as the color analyst. Tracy Wolfson will work the sidelines. The game will also be aired on the Patriots flagship radio station 98.5 The Sports Hub with Bob Socci and Scott Zolak on the call, produced by Marc Capello.

The Patriots (9-4) are coming off an awful loss in Miami, just like a year ago on the last play of the game.  The run defense was terrible as was the run blocking for the offense. But Tom Brady had a big day throwing the ball, tossing for 358 yards and three TDs.

The Steelers (7-5-1) had another late 4th quarter comeback and pulled off a dramatic 39-38 win over the Baltimore Ravens where Ben Roethlisberger threw for over 500 yards and Antonio Brown had 213 yards receiving.

We here at PatsFans.com are continuing our “Razor’s Edge” column in 2018 to give some quick analysis on some of the key matchups of the game and what you can look for in how the game plays out.

The Patriots and Steelers are meeting for the 32nd time and the Patriots with a slight 16-15 edge. However, during the Bill Belichick era the Patriots are 11-3 against the Steelers and have won the last five meetings including last years meeting in Pittsburgh.

The Patriots running game has been very good this season until they hit a snag against one of the worst run defenses in the league in Miami last week. Sony Michel has been the workhorse for the Patriots in the running game with James White and Rex Burkhead in support roles.

The Steelers have the #6 run defense (96.9 yards a game) in the league and still use the same 3-4 defense that they’ve been running seemingly forever. It starts up front with the big men, Jason Hargrave at the nose tackle and Stephon Tuitt and Cameron Heyward at the ends. The linebackers are quick and aggressive and will shoot the gaps.

Look for Josh McDaniels to throw in order to run this week. Look for the Patriots to try to take advantage of the Steelers aggressiveness at getting after the passer and try to get Michel going in that way. Some quick hitters with White and Burkhead could be on the agenda this week. The same with some Jet sweeps with Julian Edelman and Cordarrelle Patterson.

The Patriots passing game is ranked 15th in the league but much of that has to do with the slow start that they got off to in the first month of the season. Since Josh Gordon has arrived, Brady’s numbers are about the same as they were in 2017 when he was the league’s MVP. The good news is they are getting healthy, Rob Gronkowski had his best game of the season last week. Gordon is heating up and has traditionally played well against Pittsburgh. Rob Gronkowski and Brady have always played well against the Steelers. Brady also Julian Edelman, Chris Hogan, Patterson and White and Burkhead out of the backfield.

Pittsburgh is ranked 12th in pass defense allowing just 233.9 yards per game. They get after the QB very well with T.J. Watt leading the way with 10 sacks, Jason Hargrave has 6.5 from the nose which will be very telling in this game. The key to stopping Brady is pressure up the middle, if he can step up in the pocket, he will be very successful. Heyward has 6 sacks and Bud Dupree has 5.5.

It will be interesting to see how Pittsburgh decides to defend Gronkowski. Last year they played him almost exclusively with Sean Davis and he torched them in the second half. They’ll have to decide on whether to go with Joe Haden on Gordon or Coty Sensabaugh. Edelman will also be a tough matchup for them. In the past, the Steelers have played the same defense they always have against Brady. Will they mix things up this week? Or will they continue to just run their defense and try to out-execute the Patriots? Under Mike Tomlin, that is their M.O. they preach execution but they aren’t a big adjustment defense.

The Steelers running game is mired in 29th place in the NFL averaging just 89 yards per game. They haven’t shown the patience with it, even with James Conner in the lineup to stick with it. With Conner banged up and questionable to play, it will be interesting to watch if they do this week.

The Patriots rush defense is in the middle of the pack 15th in the league. But last week, against another team that struggles to run in Miami they were gashed for 189 yards on 21 carries. The defensive line was pushed around at the point of attack and the linebackers in run support were awful.

The Pittsburgh OL is one of the better lines in the league, and if they stay patient with the running game, even without Connor, they could dictate the pace and keep New England’s offense on the bench. From an NE perspective, the DL and LBs will have to play much better than a week ago.

Ben Roethlisberger has a dynamic duo in JuJu Smith-Schuster and Antonio Brown on the outside for as good a 1-2 punch as there is in the NFL. Smith-Schuster has 91 catches for 1237 yards and 6 TDs. Brown has 86 for 1063 yards and 12 TDs. Ryan Switzer is the third option outside. Vance McDonald is having a career year with 44 catches at tight end while Jesse James is still out there as well. Jaylen Samuels will be a player to watch this week. We really liked him coming out of the draft this spring and he’s an intriguing player to watch.

The Patriots pass defense has been going thru ebbs and flows. Two weeks ago they had arguably their best game shutting down Adam Thielen and Stefon Diggs from the Vikings. But last week Kenny Stills gave them fits in Miami. They will no doubt try to roll their double teams from Smith-Schuster to Brown and disguise them. They have been good at getting pressure on opposing QBs but bad at getting home with sacks.

Look for Roethlisberger to work the middle of the field this week with McDonald and James to set up his top 2 WRs. They’ll try to isolate their TEs on the NE LBs which will be a mismatch.

The kickers in this one, the Patriots’ Stephen Gostkowski and the Steelers Chris Boswell both had a rough week. But Boswell has been struggling most of the season. The team brought in former kicker Shaun Suisham to work with him. Boswell is just 3-8 from 40-49 yards this year. Despite missing an extra point and a field goal last week, the Patriots have a big edge here in the kicking game with Gostkowski.

Ryan Switzer has done a good job with the return game for the Steelers but with Patterson and Edelman, I’m going to give the edge to the Patriots here as well.

This one should be another Patriots-Steelers classic. Both teams really need this game, last year at this time it was about the #1 seed, this season it is about #2. The Texans are right on their heels in the conference and the Steelers can’t afford to lose their fourth in a row. Even for a team that never puts coaches on a hot seat, if Tomlin were to lose four in a row after a 7-2-1 start, he will start to feel the heat.

Put the Ball in Brady’s Hands: He’s had remarkable success against the Steelers thru the years. I know they want to push the running game, but this week, let #12 take the reins and trust in him to get it done.

Target the Big Men: I just have a feeling that the bigger WRs (Gordon and Patterson) are a more difficult matchup for the Steeler secondary this week. This is a situation the Patriots haven’t had much of thru the years. Their WRs tend to be the smaller quicker ones. But both Gordon and Patterson are big and very athletic. Add Gronk to the mix and they’ll be difficult to stop.

Play a Clean Game: The team can’t afford any turnovers this week. The Steelers offense is explosive and can score quickly and they don’t need to be giving them any short fields, especially on the road. No turnovers and win third downs and the red zone.

I think this one will go down to the wire, but the Patriots go home with a very close win. Brady works his magic in Pittsburgh once again. Patriots 31-27

By: Robert Alvarez
The best social media postings in response to the news of Tom Brady's retirement from the NFL after 23 seasons.
27 mins ago