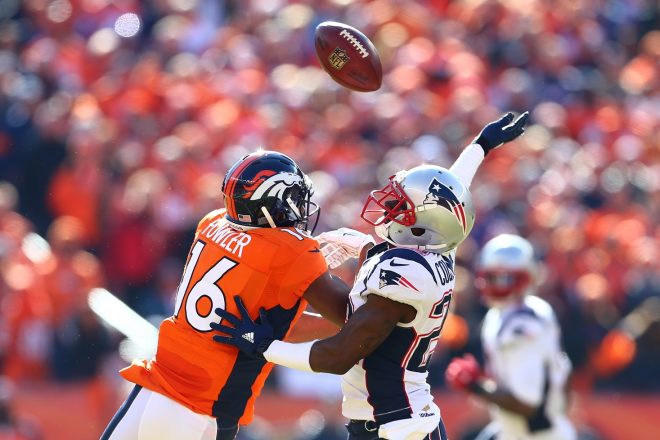 Rain and cold temperature is expected in northern New Jersey which will be a challenge for the visiting teams. Miami (vs Jets, Saturday) is used to much warmer weather in south Florida. Detroit (vs Giants, Sunday) is a cold weather city but the Lions play in a dome. Also on Sunday Green Bay is at Chicago where the wind chill is expected to be minus-18.

For all you need to know about clinching and elimination scenarios, check out Week 15 Playoff Picture: Six Teams Can Clinch Playoff Spots.

CBS has the doubleheader this week. In the early time slot Pittsburgh at Cincinnati will receive most of the broadcast distribution. For the late game the Patriots at Broncos will air across almost all of the United States. CBS will send Jim Nantz, Phil Simms and their top production team to work that game. The Lions at Giants will be televised on most Fox affiliates, in the early time frame. To see what is being televised where you will be on Sunday please check out Patriot fan JP Kirby’s 506 Sports Week 15 NFL Maps.

Why has New York had such a large drop from their 10-6 2015 record? The Jets rank 31st in giveaways and 30th in takeaways. Their minus-16 turnover differential is 31st (two-win Jacksonville is minus-17). I doubt that will improve any in tonight’s cold and wet weather, even against a rusty backup quarterback.

The Lions have won five straight and eight of their last nine games. Over the last seven games Detroit is allowing just 16.4 points per game. However center Travis Swanson is out with a concussion. The Giants have a very solid pass rush and could take advantage with pressure up the middle. Matthew Stafford is dealing with a dislocated finger. After suffering the injury last week most of Stafford’s throws were fine, though he was off on a couple of passes.

The Giants were fortunate to win last week, with Dallas dropping what should have been three Eli Manning interceptions. New York’s offensive line did not look very good, unable to figure out what to do whenever confronted with a Dallas pass rush stunt. The Detroit defense is superior up front than Dallas and capable of forcing many three-and-outs. With Darius Slay at corner the Lions are also better equipped to cover Odell Beckham.

The Lions and Giants have made a habit of winning close games. Both teams have won eight games by seven points or less. Expect another close battle here. I liked the Lions a lot when the spread opened at -5½, but I’ll still take Detroit at four points – despite the injuries to Swanson and Stafford.

After a 3-0 start the Eagles have not looked good. Since that time Philly has had only two victories, home upsets versus Minnesota and Atlanta. In those eight other games Philadelphia is giving up an average of 27.5 points per game. The Eagles will be without Darren Sproles Sunday. That doesn’t help an offense that is scoring only 16 points per game during their current four game losing streak.

Cold weather and gusty winds are expected to make this the coldest game in Chicago Bears’ history. Aaron Rodgers suffered a calf injury last week so that weather won’t help his situation. Green Bay is down to a third option of Ty Montgomery at running back. Eddie Lacy is on IR with an ankle injury and James Starks is doubtful after suffering a concussion in a car accident Monday. With Jordan Howard running the ball Chicago should be able to keep this game close.

Running back Adrian Peterson has been activated, though it remains to be seen how much he will play. The Colts are giving up 4.5 yards per rush; Peterson would be a huge boost to Minnesota’s anemic offense. Both teams are dealing with injuries to key players. Indy LG Jack Mewhort’s season ended with a knee injury last week and his backup, Denzelle Good, is out with a concussion. Free safety Harrison Smith (ankle) and RG Brandon Fusco (concussion) are both out for the Vikings.

Cleveland’s defense ranks 31st in points (28.8 ppg), yardage (397 ypg) and rushing (146 ypg). The Browns are also allowing 4.6 yards per rush (29th) and are last in the NFL on third down (48.2%). Expect a heavy dose of LeSean McCoy, who now has eight games with over 100 yards from scrimmage. While the Bills have almost zero chance of making the playoffs, they don’t want to be the team that lost to the Browns.

The big question is how Kansas City will perform without Derrick Johnson, who was lost last week with a torn Achilles. Tennessee ran for 180 yards last week against Denver, who has a comparable run defense to Kansas City. The Chiefs have had extra time to prepare after playing last Thursday, but this could be a trap game. Last week KC played Oakland, and they could be caught looking ahead to next week’s game against Denver. However Arrowhead offers one of the best home field advantages in the league and the crowd noise could lead to mistakes by the Titans. This Tennessee team is not used to playing in big games. KC has made a habit of capitalizing on opponent’s mistakes, resulting in an NFL-best 25 takeaways.

Houston has not won by six or more points since Week 8, but this is the Jaguars they are playing. The Jaguars have lost eight straight and just want the season to hurry up and be over. Jacksonville doesn’t force turnovers (a league-low eight takeaways) while giving the ball away 25 times. Houston should win easily despite their stagnant offense.

Cincinnati is allowing 4.5 yards per run (27th) and 119 rushing yards per game (25th). The Steelers ran for 240 yards on the road last week against what was supposedly a decent Buffalo defense. If Cincy sells out to stop Le’Veon Bell then Ben Roethlisberger will be more than happy to throw passes to Antonio Brown. The big concern is Pittsburgh’s penchant for playing down to the level of their competition. Pittsburgh struggled mightily on the road early this season with losses at Philadelphia, Miami and Baltimore. Is that a thing of the past after victories at Indianapolis and Buffalo?

Carson Palmer has not played well all season. The Arizona offensive line is incapable of either pass protection or run blocking. Now the Cardinal defense is being decimated with injuries. However, center Max Unger missed last week’s game and is questionable for Sunday with a foot injury. Without Unger opponents are able to collapse the pocket and apply pressure up the middle on Drew Brees. Look for Calais Campbell to be tormenting Brees all afternoon.

Even without Julio Jones the Falcons should win easily. The Niners have had no defense all year, and now the offense has been weakened. LT Joe Staley is doubtful with a hamstring injury. On top of that C Daniel Kilgore and TE Vance McDonald were placed on IR this week.

Denver’s run defense has taken a hit in comparison to recent seasons. The Broncos are allowing 127 yards rushing (29th) and 6.2 rushing first downs (28th) per game. The Patriots will try to run the ball with LeGarrette Blount, and utilize running backs Dion Lewis and James White as well. That would open things up for play action passes, and keep Denver pass rushers honest. The Broncos have been unable to run the ball, and neither Denver quarterback is capable of generating much offense.

Oakland cannot stop the run. The Raiders are giving up 4.7 yards per carry (30th) and 120 yards rushing per game (26th). Unfortunately for San Diego Melvin Gordon is out with a hip injury and Danny Woodhead blew out his knee in September.

After looking atrocious early in the season, the Buccaneer defense has taken great strides. Over the last five games the Bucs have allowed an NFL-best 13.0 points per game. Much of that has to do with Keith Tandy replacing an ineffective Chris Conte at safety, but other players have stepped up their game as well. OLB Lavonte David and DT Gerald McCoy have been studs for a while. Now thy’re getting help from MLB Kwon Alexander and defensive ends Robert Ayers and Noah Spence. Wouldn’t an upset be fun, just to watch Jerrah’s reaction?

The Carolina offensive line is a mess. As a result Cam Newton cannot complete even fifty percent of his passes. On defense the post-Josh Norman era has not worked out well for the Panthers. Injuries to Luke Kuechly and Charles Johnson have exacerbated the situation.

My advice was to take the Seahawks, despite the huge spread.

I just don’t understand why Pete Carroll decided to go for a fake punt with a big lead in the fourth quarter. Wouldn’t he have been better off saving that play for a critical time in a meaningful game?

3-Game Parlay (one unit):
Giants vs Lions +4
Broncos vs Patriots +3
Colts at Vikings under 45½

Week 14 wasn’t bad at all, considering the fact that there were not many games that jumped out at me that were particularly advantageous.