6 years ago at 6:31 am ET
Follow @SteveB7SFG
Posted Under: Patriots News 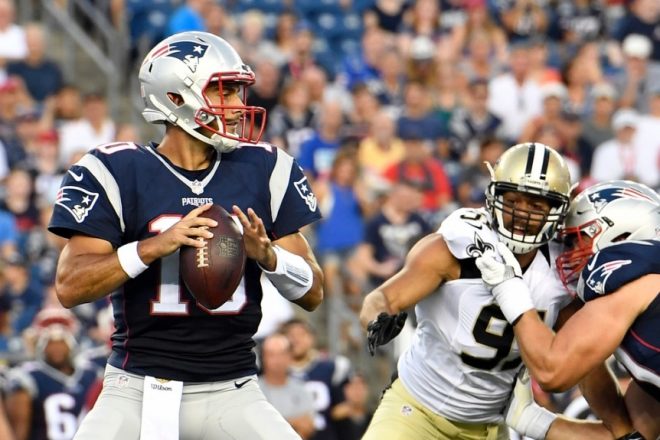 “There are no dress rehearsals, we are professionals, this is the big time” Willie Nelson

With the starters playing into the third quarter, it still isn’t a “dress rehearsal” as Bill Belichick so aptly pointed out this week to members of the media who asked him as such. But we will get a chance to see the starters or whoever is starting this week for an extended look so that will be fun.

But back to the situation at hand, and that’s what to look for from a Patriots perspective tonight. We’ve heard that Tom Brady will make his preseason debut tonight and we’ll get to that in a bit but Belichick’s crew will be looking to get some things accomplished. And foremost should be getting out of Charlotte healthy. Here are our five areas to watch for tonight:

Who Steps Up at WR: With the preseason winding down, we still won’t see Julian Edelman, Malcom Mitchell or Danny Amendola (PUP), so Chris Hogan will be the go-to guy early. But here is where it gets interesting. Keshawn Martin is back to practicing and should play against the Panthers. He, Aaron Dobson, Chris Harper, DeAndre Carter and Devin Lucien are all locked in a battle for the final wide receiver spot on the roster. 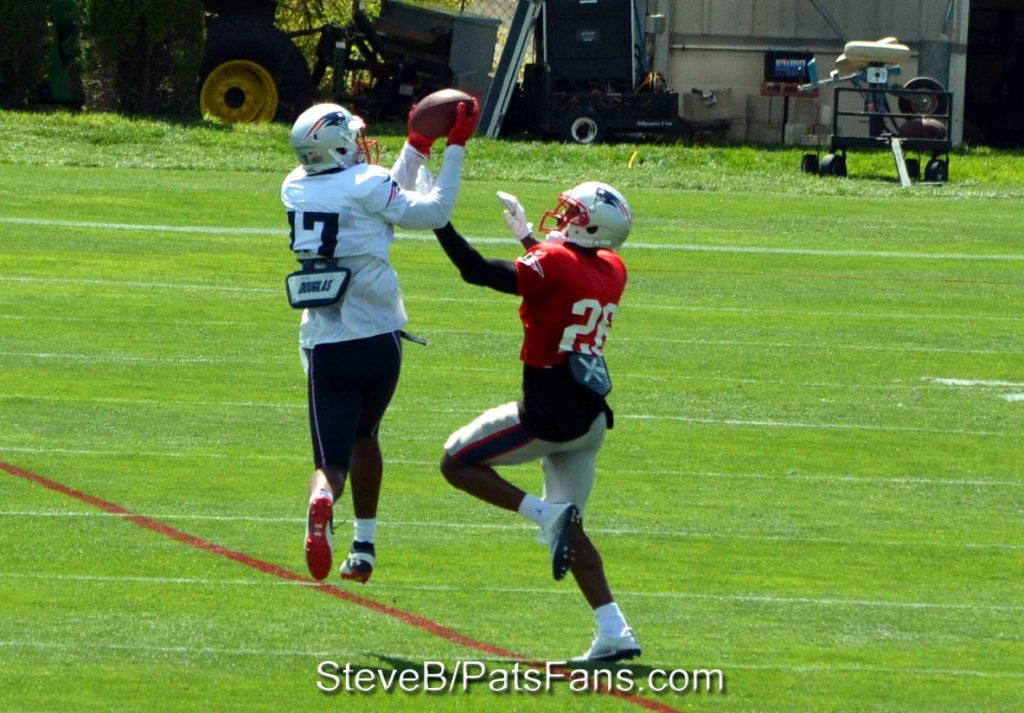 Martin is going to have to show that he’s healthy and able to produce. His versatility and production give him a leg up on the others but they’ve been working with Jimmy Garoppolo and Tom Brady in his absence so they’ll likely have a bit more chemistry and timing down with the QBs.

Carolina has one of the better defenses in the league and they’ll be playing into the second half, so this should be a good test for all of the WRs, as they have just two games left to make an impression with the coaching staff.

How Much Will Butler/Ryan Play at CB? With the roster competition going on at the corner position, Malcolm Butler and Logan Ryan are locks for the roster. Ryan just recently shed his red non-contact jersey and they may play only the first quarter as the coaches may want extended looks from the young corners vying for roster spots and playing time.

Rookie top draft choice Cyrus Jones is another lock and he’s played well this summer. He and second-year corners Justin Coleman and Darryl Roberts are vying for reps with rookie UDFAs Jonathan Jones and Cre’Von LeBlanc. Coleman is a near roster lock and the remaining three are essentially battling it out for a final roster spot.

Jonathan Jones had the early advantage in camp but LeBlanc has been right on his heels. Both have played very well this summer. Jones is gifted athletically while LeBlanc is a guy who saw his draft stock slip because he didn’t test well this spring. They may each see some time against Carolina’s top offense. Roberts didn’t have a great summer but turned it up against the Bears a week ago. He had a good week of joint practices and then had three passes defensed in the preseason game. He’s still in the mix.

Gaffney, Foster Each Trying to Earn a Roster Spot at RB: Much of the social media banter with the Patriots RBs centers around if the team will make a move for another back to come in and add to the depth or lack thereof at the position. LeGarrette Blount is, for now, the big back who will carry the ball between the tackles. James White is the third down passing back specialist. He’ll catch the ball out of the backfield or split out wide to create mismatches. Brandon Bolden is the STs player who can sub in as needed. 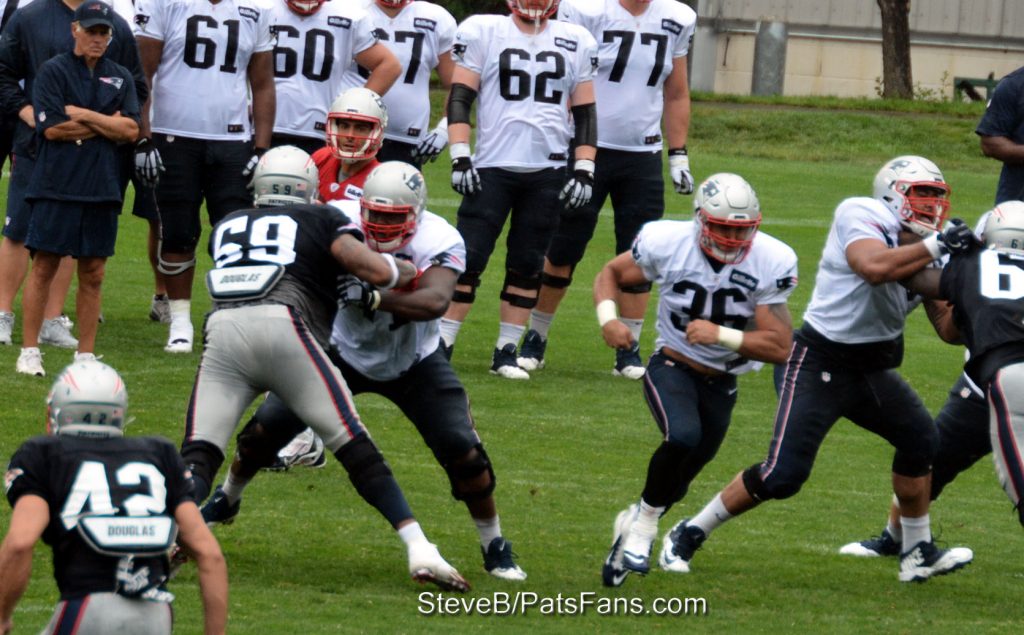 That leaves a single roster spot there for the taking since Dion Lewis will start the season on PUP when it was learned on Sunday that he’d need additional surgery on his knee. Tyler Gaffney and D.J. Foster are each vying for the final spot. Gaffney was originally drafted by Carolina two years ago before being hurt and spending the past two seasons on IR. He’s healthy now and offers the additional big back depth of running the ball between the tackles and catching the occasional pass. He shined against New Orleans in the first preseason game. Now he’ll be looking to do it against his former teammates.

Foster was one of the most intriguing pickups of the spring. An UDFA from Arizona State, he is the quickest and smoothest route runner of the Patriots backs. With nearly 2500 yards each running and receiving in college he is a guy that has a ton of potential. But he pulled a hamstring in minicamp and has been MIA all summer. Now finally healthy, he’s going to have to show, and quickly that he belongs.

Offensive Line Play Against Tough Defense: While the game planning aspect is out of the game here, this will be a good test for the Patriots offensive line against a very tough Carolina front seven.  And the Patriots seem to have their starting five OL set with the trade of Bryan Stork and the news that Sebastian Vollmer is probably going on IR. Nate Solder, Joe Thuney, David Andrews, Josh Kline and Marcus Cannon will be the Pats starting unit this week and on Week 1 in Arizona.

Now is the time for coach Dante Scarnecchia to get this unit’s play down and get the communication and calls in seamlessly. One of the issues last year was the constant mixing and matching done because of the numerous injuries that hurt their continuity. Here’s a chance to begin to work on that and getting the group to function as one.

Finally, the Quarterbacks, Who plays and how much? Tom Brady made it clear that he wanted to play, wants to play in the preseason and expects to play. Brady made the trip to Charlotte and is expected to play, at least some but who starts?

If I’m Bill Belichick, I give Brady a series, hopefully around 6-10 snaps to get him a feel for game action again and then have Garoppolo play into the third quarter. Although he won’t have many of his weapons (Edelman, Gronk, Amendola) for this contest, its valuable experience against a tough defense that will serve him well when the games count for real in two weeks.

This way we’ll see all three QBs get some game action in as Brissett can log some snaps in the 3rd-4th quarter and gain some needed experience himself. There’s no right or wrong answer here, Belichick and Offensive Coordinator Josh McDaniels will have to feel their way here and do what they feel is right.