6 years ago at 8:32 am ET
Follow @LeeSchechter
Posted Under: Patriots Commentary 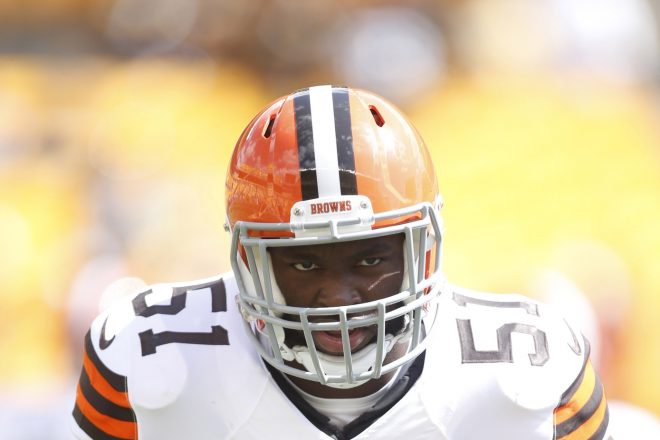 Seemingly out of thin air, the Patriots landed Barkevious Mingo from the Cleveland Browns in exchange for a fifth-round pick.

Mingo has been on their radar since he was drafted No. 6 overall in the 2013 NFL Draft by the Browns. Though, Mingo has struggled to the point where the Browns may have cut him if they couldn’t find a suitor. Enter the Patriots, who finally got their guy.

During his Browns career, Mingo didn’t carve out a consistent job or specialized role on the defense. He was used as a player in space coverage and drop-backs rather than as a pure pass-rusher, which is his more valuable asset coming out of college. Though he still may not return to an edge-rusher role with the Patriots. The reasoning for Mingo’s misplacement in the Browns’ defense was likely due to his bizarre size and length at a typically big-bodied position.

At 6-foot-4, Mingo has tremendous length, which is what he used as leverage during his college days at LSU. Mingo could explode off the edge and burst his way into the backfield for sacks. But, Mingo’s downfall is still his thickness or size.

He is a mere 241 pounds according to Pro Football Reference. In the NFL, 241 pounds hardly cuts it as a defensive end and pass rusher. Furthermore, Mingo is probably 241 pounds fully clothed and soaking wet. Mingo is more like a big safety in size than a defensive end. He has struggled to maintain weight or put on weight in his NFL career. But, Mingo’s raw athleticism is exceptionable. With sub-4.6 speed and top performances at four drills for defensive ends in the 2013 NFL Draft Combine, it seems that Mingo was in the wrong place and wrong position at the wrong time in Cleveland.

So who other than the Patriots would scoop up a misused player at a low value and hope they can transform the player into what he should become?

While Mingo was the No. 6 overall pick and has huge potential, he isn’t going to come into New England and be the insurance policy to Dont’a Hightower and Jamie Collins. He’s a different type of player. But, Mingo does provide tremendous depth at OLB/DE. Given the injuries (no matter the duration of missed time) to Rob Ninkovich, Shea McClellin and Jabaal Sheard, Mingo was worth the minimal risk. Mingo will likely push someone like Geneo Grissom off the roster, but Mingo’s potential is worth losing out on Grissom.

In theory, Mingo would be a lengthy, speedy pass-rusher. Though, the edge may not be the ideal spot to play him as opposing lineman are big enough to deter his course with ease. Mingo makes sense as a depth linebacker who can play in sub packages. He probably slides above a player like Jonathan Freeny on the linebacker depth chart. Given his length and speed, Mingo can cover a lot of space created by sub packages. That’s a very valuable skill to have from a depth player.

Mingo is also so athletic and quick that he could be sent on a blitz to burst through the gaps. Whether he is dropping back at all or blitzing, Mingo has versatility that can be tapped into. That’s what the Patriots see in him.

All eyes will be on Mingo who is bound to receive some snaps against the Carolina Panthers in the third preseason game of the season. The biggest question will be how he is used. But, it will also be interesting to see how much action he gets.

Mingo will definitely be on the roster this season since the team gave up a fifth-round pick. So where does he fit into the defense? It looks like a sub package linebacker either inside or outside is the most likely destination for Mingo on the defense. Yet, his speed makes him intriguing as a potential situational pass-rusher.

Time to see what Mingo brings to the Patriots on Friday night. Maybe he will follow the likes of his former Browns teammate Jabaal Sheard who has become a key component of the Patriots’ defense.

By: Ian Logue
With New England sitting with little cap room, something had to give in order for them to get their final three draft picks signed.
27 mins ago