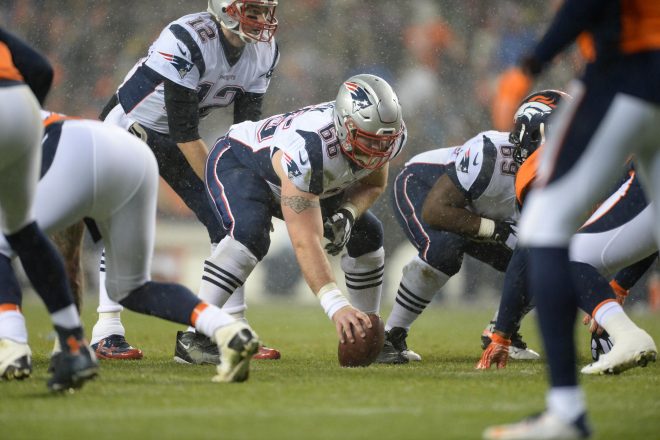 Interesting Day With End of Stork’s Tenure – It seems like when it comes to some players seeing the end of their tenure in New England, the Patriots often have a tendency for things to get interesting.

That was the case on Wednesday when the team parted ways with center Bryan Stork, and it lead to a chain of events that was the talk of much of the day after the way things played out.

According to the Boston Herald’s Jeff Howe, the team informed the third-year center of his release Wednesday morning, and word apparently made it back to Redskins GM Scot McCloughan, who called Nick Caserio about a trade before Stork had a chance to hit the waiver wire.

As a result, the Redskins managed to acquire him for the cost of just a reported seventh round pick.  But one other little detail is the fact that Stork is reportedly mulling retirement, which would nullify the compensation the Patriots would potentially receive.  To them, it’s probably just a bonus given the fact they were willing to let him go to begin with.  The reason likely stemming from the concussion issues he’s had recently, which was a problem he had during his time at Florida State.

Stork already suffered one during this training camp, and it’s hard not to wonder if that played a part in their decision to move on from him.

The player who will certainly notice his absence is Jimmy Garoppolo, who will most likely be taking snaps from David Andrews this season now that Stork isn’t going to be here.  Garoppolo told reporters Wednesday that seeing him leave was difficult, but it’s part of the game.

“It’s tough,” said Garoppolo. “It’s that time of year. There’s a lot of movement between teams and players and everything, and it’s tough to see one of your guys go like that. But that’s the business, I guess.”

Gronkowski back at Practice, Calls Out Cowboys – It’s been more than a week since Patriots tight end Rob Gronkowski has been on the practice field, but the veteran returned to the field on Wednesday, two days before the team’s third preseason match-up against the Panthers.

Gronkowski left the field last week following an injury he suffered during a 7-on-7 drill against the Bears.  The tight end pulled up short on a play and left the field with a trainer and didn’t see action against Chicago.

Given his history Gronkowski likely won’t see the field against the Panthers this week either, with the team in need of him being as healthy as possible with Jimmy Garoppolo set to be the quarterback over the first four games.

WR Washington Released – Despite their injuries, this is one of the most crowded wide receiver groups in recent memory but it looks like it got a little lighter after the team released one on Wednesday.

Bill Belichick has a history of giving veteran players the courtesy of letting them go with plenty of time to latch on elsewhere, and the Patriots did just that after releasing Nate Washington yesterday.

Washington hasn’t been able to standout during this preseason, but it’s not due to lack of opportunity. He played 15 snaps against the Saints in the first game, followed by 21 last week against Chicago and has just one reception for 8 yards on 1 target to show for it.

Needless to say, it looks like he wasn’t a great fit here and the Patriots opted to part ways and give him the chance to catch on elsewhere.  He won’t be the first to have this problem, and as a result of this transaction, the team has one fewer decision to make heading into the end of preseason.

Rivera “Loves” Belichick’s Take – Carolina head coach Ron Rivera heard Belichick’s comments earlier this week about how tough it is to call this week’s game a “dress rehearsal” given how different this game is compared to a meaningful regular season contest, where the game planning and preparation are so different.

Belichick said the two aren’t even “in the same universe” and it sounds like Rivera believes there’s definitely a difference.

“I love what coach Belichick said,” Rivera said via Black and Blue Review after Wednesday’s practice. “It’s a complete world apart. The one thing you can’t do is emulate the atmosphere, the intensity level, and quite honestly, even though you do game plan, you don’t game plan everything.”

Rivera also went on to say that whether or not Tom Brady sees action this week won’t matter, as they’ll need to go out and play well regardless of who is out there.

“Whether (Brady) plays or not I think is inconsequential in terms of this game,” said Rivera. “This is – to a degree – the dress rehearsal, but for the most part, we’re going to go out and do what we do. We’ve looked at what they’ve done in the preseason and that’s what we’re game planning against.”

By: Mark Morse
Today I am going to give a wrap-up of the East-West Shrine game practices.  The Patriots coaching staff has been very hands-on.  Steve Belichick arrived…
6 hours ago