1 month ago at 10:43 am ET
Follow @MarkMorse5
Posted Under: Patriots News 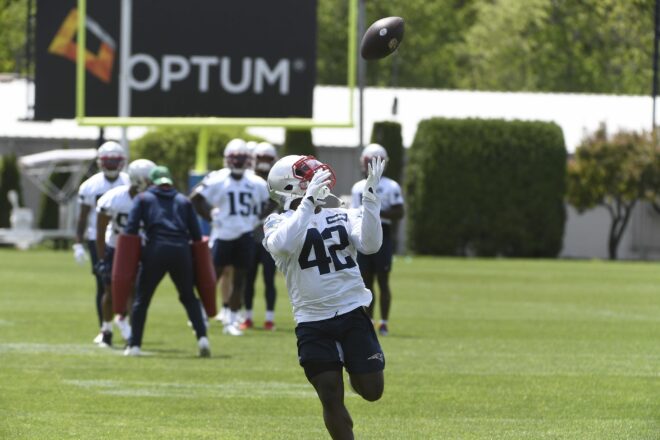 I prescribe to the theory that Greg Bedard has floated a few weeks ago that the Patriots really have a 55-man roster.  The injuries to Tyquan Thornton and Kristian Wilkerson’s concussion necessitate two veterans being cut so they can short-term IR these 2 players, then re-sign these vets.  I am assuming that Montgomery’s injury isn’t a season-ending injury.  See my comment below.

No Change I have had these three all along.  Zappe has been inconsistent.  He never took a snap under center in his college career.  He had a fumble in the Raiders game with the Center/QB exchange.  Zappe is a gun-slinger and will throw the ball from all types of angles.  Not always the best.

The extent of Montgomery’s injury is not known at this time so I am going to assume he will make the original 53-man-roster and then get put on short-term IR after 4:00 on Wednesday.  However, I read a tweet by Mike Reiss quoting Bill Belichick from the Greg Hill show on WEEI.  When Belichick was asked about Ty Montgomery’s status … “We haven’t practiced since we’ve been back here. So we’ll see how things go today, see what he’s able to do. But I think he’s doing all right.”  So perhaps he doesn’t get IRed after the roster is established.

I moved Humphrey into the 3rd TE spot and waived Wydermyer, Sokol, and Asiasi

I am not sure that Owenu can play RG in this blocking scheme.  In a straight-ahead hat-on-hat blocking Owenu is strong.  I am hoping that Wynn gets traded opening up the RT spot for Owenu.   Say goodbye to Bill Murray and Dejarlais.

Again I hope that Wynn is traded (Dallas anyone?)  That would free up our salary cap problem for the year.  If not I am keeping 4 OTs.  Hambright also played LT in the pre-season and looked pretty good there.  Herron has not looked good and could be a surprise cut.  There is such a dearth at the tackle position in the league I am just not cutting a young player like Herron.  Yasir Durant is cut.

Ray and Roberts really came on during camp.  Kept Ray at the expense of Daniel Ekuale.  Don’t think either player would get through waivers.

McGrone and Langi waived.  I don’t want to see Tavai play on defense at all.  He and Bentley were paired together against Las Vegas and they went right at them.  Neither can cover their mother running a pass pattern.  I like the idea of Bentley on the edge.

Mitchell has played himself onto the roster.  He has been on every Special Team and has shown some push up the field on Defense.

The Jones boys (Marcus and Jack) have played very well as rookies and I am excited to see what they can do.  Marcus is also an elite punt returner.  Jon Jones has moved to the boundary corner and will immediately match up with Tyreek Hill.  Shaun Wade was a tough cut.  Justin Bethel just played Special Teams and was very good but roster spots are hard to find.  Terrance Mitchell just didn’t show enough.

This is perhaps the strongest group on the team and maybe in the league.  They all play like linebackers and you will often see them line up close to the LOS

Myles Bryant is a tough cut but his size has really played against him.  Schooler has been the surprise of camp and will make the team as a UDFA.  Davis was the top tackler on Special Teams last season.

Cut Joe Cardona but will immediately resign him when Wilkerson goes on IR.

Nice job. One criticism – those two LBs could have covered my mother – even in her prime!

By: Russ Goldman
In this episode, we look back at the Patriots loss to the Packers, and then we look ahead to the Lions game.
2 days ago
wpDiscuz