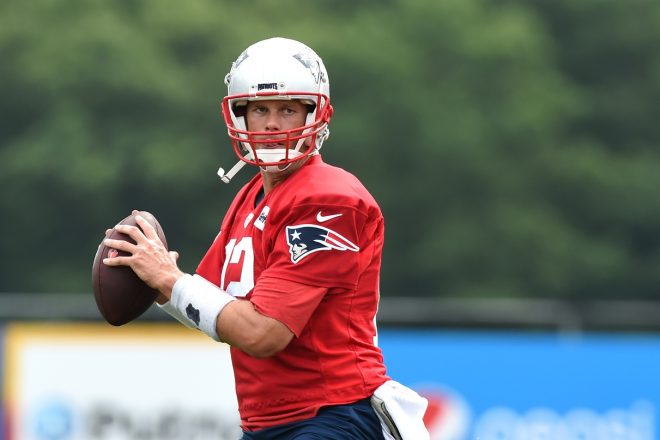 With the Eagles coming to town this week for the Patriots’ second preseason game of 2018 on Thursday night at Gillette Stadium, we’ll likely have to listen to some media hyping it up as a “Super Bowl Rematch” between the two teams. That’s an irritating notion given that a meaningless exhibition game couldn’t even come close to measuring up to the damage done in February and instead, it’s just another step forward as the Patriots continue putting this year’s group together.

Here’s a look at this morning’s news to kick off this week.

Brady’s workload increases – It was a busy day for Tom Brady on Sunday, who saw his workload increase quite a bit during the team’s practice session.  Brady got the lion’s share of the work, with the veteran reportedly completing 17-of-22 passes while looking extremely sharp.

Brady didn’t play in Thursday’s win over Washington, with Brian Hoyer playing in 85% of the snaps in the opener.  Hoyer had two distinctly different halves of football, hitting 6-of-12 for 65 yards as the offense scored just three points in the first half, before completing 10-of-11 in the second half for 79-yards as the offense put up 23 unanswered points to overcome a 17-3 deficit and get the victory.

It was a reminder that despite Mike Reiss’ attempt to downplay Hoyer’s outing by comparing it to Matt Cassell’s performance during a game against Tampa Bay in 2008, which later saw Cassell go out and win 11 games when Brady went down with a knee injury, this team will likely be in serious trouble if Brady were to go down this season.  The 32 year old Hoyer has taken a beating over the years and what was more concerning was the fact there didn’t seem to be a lot of zip on the ball.  In fact, several players took some hits from defenders as a result of the ball getting there late.  As a result, if Brady was to go down, the parallel of what happened in 2008 probably wouldn’t make fans feel much better with Hoyer at the helm.

Fortunately, aside from that season, Brady’s been a reliable fixture under center and seems like he’s poised for another good year.  Hopefully, that will be the case and Hoyer will just be along for the ride for another season.

Players Face a Quiet Struggle – Patriots fans have gotten the opportunity to see first-hand what players go through in practice during this training camp, but what they don’t see are what they go through to get their bodies at the level they need to be to compete in those situations.

Ben Volin of the Boston Globe pointed out in his Sunday notes that their battle begins in the morning before they even hit the field, looking at the struggle players face with trying to maintain their weights, especially the larger lineman on both sides of the football.

“I was always a guy that struggled to keep the weight on,” Vollmer, who has lost 75 pounds since retiring, told Volin. “First thing, you go in and you have three cups of oatmeal, and you put your protein powder in there and a lot of nuts and peanut butter. You had 1,000 calories. Then you had breakfast — it’s a lot of liquid stuff, always putting on all these calories, these fancy shakes in the morning. It was a struggle.”

Weighing 300 pounds obviously isn’t natural, with guys having to take in an enormous amount of calories to maintain their weight, especially when they’re out there in 90-degree heat competing hard.

The team has a dietician, Ted Harper, who helps players both with their diets as well as keeping the team’s snack room stocked with healthy foods while also providing advice as needed.  Safety Devin McCourty, who played with former Patriots tackle Vince Wilfork, pointed out that Harper’s advice was well-received by Wilfork, who at 325 pounds was quite a presence in New England’s defense and Harper helped make sure he stayed there.

“I remember seeing Vince talk to Ted, and Vince would know exactly to the brink of what he was allowed to eat,” McCourty told Volin. “And you’d see Ted be like, ‘You can have a chicken sandwich. [Vince] would be like, ‘All right, cool, chicken sandwich with a plate of broccoli.’ It’s always good seeing guys paying attention.”

It was a nice bit of insight into an area that isn’t talked about but it’s something these guys deal with.  Good stuff.

Eagles’ Goedert Part of Internet Hoax – With the Eagles coming to town this week, there was an interesting turn of events that happened over the weekend after tight end Dallas Goedert suffered an arm injury Saturday, which led to a story that went out of control and had Eagles fans in a panic.

According to NJ.com, Tweets began to surface from those who thought he left the stadium in an air cast, with speculation swarming that he had suffered a broken arm.

Fortunately, that wasn’t the case.

“I kinda have the inside scoop on it,” Goedert said Sunday’s practice, with a smile. “So I thought, eh, I guess they can think what they want.”

That’s the joy of the social media world where all it takes is one person to put something out there for other people to jump on.  So Goedert just sat back and let it play out, but he knew the real story.

“It’s what people do in the social media world: they overreact,” Goedert said. “Nobody was sure, they were like: ‘you might have a broken arm, but we don’t really know.’ They were just kind of saying things. It’s nice to know that I know what’s going on.”

Goedert will be a player to watch this week.  He led Eagles receivers with 4 receptions of 5 targets for 66-yards and a touchdown during Philadelphia’s 31-14 preseason loss to Pittsburgh last Thursday night.

– Rookie offensive lineman Isaiah Wynn saw an increased role during Sunday’s practice, getting work on the right side at the tackle position with LaAdrian Waddle.  This was the first time during training camp he’s gotten reps on the right side.

– Jonathan Jones spent some time getting reps at the nickel corner position, showing that he’s made some good progress as he continues coming back from the ankle injury that ended his season in 2017.

– Braxton Berrios made some noise on Sunday, making a diving reception on a throw from Brian Hoyer that he managed to pull in and make the highlight grab.

– Cyrus Jones reportedly got some reps on defense, which should add some additional competition in the secondary over the final three games as he tries to get some redemption from a rough rookie season after missing his sophomore season with an ACL tear last preseason.

– A nice heavyweight battle on Sunday between Dont’a Hightower and Rob Gronkowski, with Gronkowski beating Hightower on a deep play where the linebacker had good coverage but the ball was perfectly placed by Brady that arrived just as Gronk turned his head.  Those are the moments you love to see, and Gronk, as usual, made the tough play.

– Closing this out, Mike Reiss pointed out a couple of stats in his Sunday notes that will be fun to keep an eye on this season.  Should Brady go on to pass for over 4,000 yards again this season, he’ll join Peyton Manning (14) and Drew Brees (12) as the only players in NFL history to pass for at least 4,000 yards in at least 10 seasons.  Brady also needs just 21 touchdown passes (including postseason) to pass Manning for the most touchdowns in NFL history.  One would have to believe he’ll achieve both of those milestones.

By: Robert Alvarez
Julian Edelman appears on the Barstool Sports "Pardon My Take" podcast, reacts to Bill O'Brien's hiring, and more.
17 hours ago