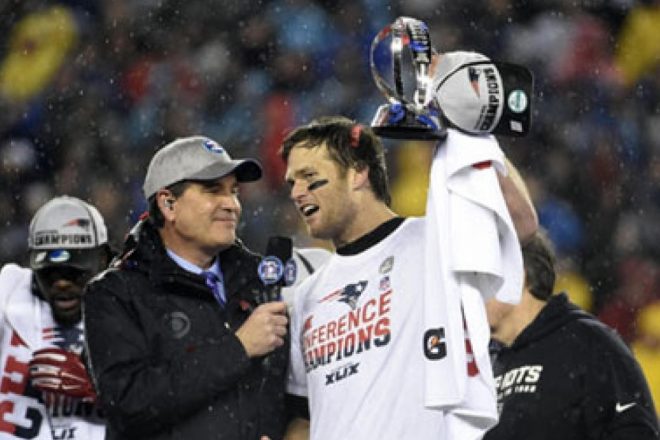 Tom Brady’s days of dueling with Peyton Manning and the Indianapolis Colts may be long over on the field, but the rivalry between them continues to live on in other ways, even as Brady begins a new chapter of his career in Florida.

The Tampa Bay Buccaneers quarterback found a new opportunity to take a quick shot at the Colts after he was asked about the Bucs piping in fake crowd noise at their Friday practice.

“I thought it was one of the Colts’ old tapes when they used to pump all that sound into the RCA Dome,” Brady joked. “I was telling coach Clyde that he must have pulled that out of his basement for today’s practice. We had a great time with it.”

For background, Bucs quarterback’s coach Clyde Christensen worked with the Colts from 2002-2007, the final year of which they were accused of pumping artificial crowd noise into their old stadium during a regular season matchup with the Patriots.

Although the Colts were later cleared of any wrongdoing by the NFL, the questions and debate still linger by Brady and other former Patriots to this day.

You can judge for yourself in this clip below.

Colts fake crowd noise. You can kinda hear it change around the 5 second mark, then it completely changes after Moss is tackled. idk you be the judge of it. https://t.co/Jh94hEWqsk pic.twitter.com/o9RQmyObnf

Fast forward to 2020, the NFL is preparing for all teams to use artificial crowd noise, albeit legally as most stadiums remain without fans in September due to COVID-19.

Brady was then asked how he will prepare for the unusual change, and once again didn’t pass up an opportunity to squeeze in one final jab.

“It definitely has its challenges. If that’s how loud it’s going to be that’s going to be tough for everybody,” he said. “The communication’s tough and you don’t have a down moment. You’re screaming the whole day to people on the sideline, which is very unique to a game because normally it ebbs and flows. But with that pumped in crowd noise it doesn’t ebb and flow — it just flows. We’re going to have to get used to that.”

“I’m going to have to draw on my earlier days”, Brady said. “That was a joke everybody. Just want to make that clear.”

What is also clear? Brady refuses to bury the hatchet even after all these years, and given how many times his Patriots were punished as opposed to the Colts. Can you really blame him?