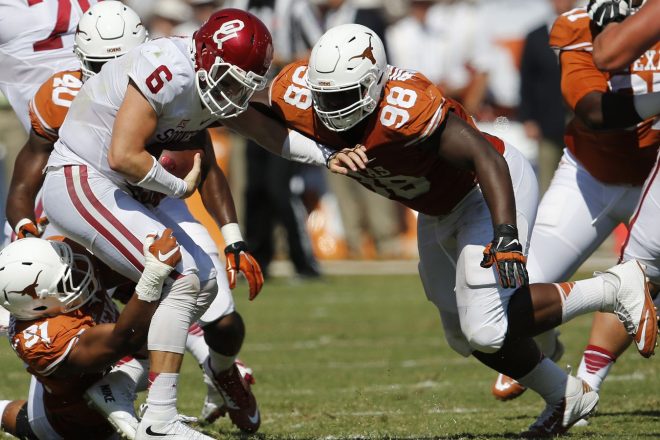 Texas Two-Step? Could the Patriots re-unite Ridgeway with Malcom Brown?

The Patriots still have a need at defensive tackle following the loss of Akiem Hicks during free agency. The team signed journeyman Frank Kearse but could use another big body inside who can help stuff the run and push the pocket from the interior.

The team used a nice rotation last year of rookie Malcom Brown, Alan Branch, Hicks and Dominique Easley during 2015. With Easley’s injury concerns still an issue, more depth is needed. Branch and Brown may prove to be the top two players but keeping fresh legs and bodies is imperative for the big men inside.

The Patriots kicked the tires on free agent Nick Fairley of the Lions and Rams but were thought to be out of the loop now for a deal. While there are still other free agents still available and still a possibility, the draft is chock full of prospects right thru the middle rounds of players who can step up and play immediately.

Hassan Ridgeway from Texas is a player who immediately comes to mind and could become a Patriots draft target. One of the more underrated defensive tackle prospects, he was brought to the Longhorns as a 250-pound edge rusher. He put on 50 pounds and is now an interior presence. Powerfully built at 6’3, 307 pounds, he’s an interior disruptor who can stuff plays in the backfield and push the pocket from the inside.

When teamed with the Pats Brown during his sophomore season, he was immense, stuffing 11 plays for a loss. In his final season at Texas, he was again a factor notching 36 tackles, 3.5 sacks and 6.5 tackles for a loss.

Ridgeway played mostly five-technique in Charlie Strong’s 3-4 defense but switched to a one-technique when the Longhorns went to a four-man front. He decided to forego his senior season and enter the NFL Draft a year early. So for the second season in a row, Texas loses its top defensive lineman to the NFL Draft. The last one ended up in New England. Where will Ridgeway end up?

Ridgeway turned heads at his Pro Day by running the 20-yard short-shuttle in 4.69 seconds and the 3-Cone Drill in 7.33 which for a big man of his size is pretty impressive. At the NFL Combine he ran a 5.02 in the 40-yard dash with a 1.71 time in the 10-yard split. That is outstanding short area burst and quickness something NFL Network’s Mike Mayock was pointing out when evaluating big men.

– Good vision, can sniff out plays at the snap and adjust

– Conditioning was an issue at Texas

– Had a lot of nagging injuries that could be an issue

– Not yet the sum of his parts, needs to step up his production

What his Role Will Be:
His role is part of the rotation inside for the Patriots defensive line. He’d project initially as an earlier down run stuffing player, but he’s a guy who can shed blockers quickly and get after the quarterback.

Yes, with some better conditioning and experience in the pro game, he’ll be looked at in Year 2 to produce more in the pass rush department

Ridgeway would fit in very well in the New England system. He’s a powerfully built young man who won’t be easy to move at the point of attack. He has a good football I.Q. and can diagnose plays at the snap, anticipate the design of the play and disrupt.

He’s mature and that will play out well with Bill Belichick and the coaching staff. With the Patriots rotating interior men in and out, he’ll benefit playing with veteran Alan Branch and his former Texas teammate Brown.

He’s versatile (another Belichick checkmark), and having played both inside and outside on the defensive line will serve him well. As a former edge rusher, he shows good hand work which can still be improved. His pass rushing skills are good, not top notch but can definitely improve with time.

There are some conditioning and nagging injury issues but he’d be a very good addition to an already stout defense in 2016.

He projects in the Patriots system to be a Potential Starter on Day 1. He should fit in very well into the NE defense as a member of the defensive line rotation.

Ridgeway was initially thought to be available around the 4th round of the draft. His impressive Pro Day with Texas may have him moving up draft boards.