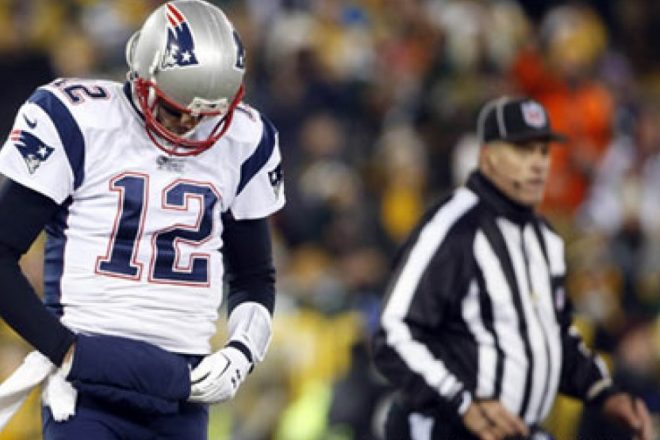 As we enter the dog days of summer, the takes and opinions among national sports media members get as hot as the heat when their football preseason predictions roll in.

It’s no surprise to many that follow the NFL closely, many of these sizzling “hot takes” come from the ESPN debate show “First Take” every weekday morning.

In recent seasons many fans have grown accustom to the boisterous rumblings of Stephen A. Smith and Skip Bayless but the recent words of Bayless’ new replacement Max Kellerman have Patriots fans in uproar more than ever on social media.

On Thursday morning, Kellerman was asked about the future of Tom Brady when he returns from his four game suspension and boldly stated;

“Tom Brady’s just about done, It could be his next game, it could be a year from now, but he is going to fall off a cliff. Tom Brady is going to be a bum in short order.”

“He’s 39. So will it be this year? Not necessarily. I can see Brady if he gets through the year without an injury putting up big numbers. But then it’ll be next [year]. He’ll be terrible by the middle of next season.”

CBS Boston’s Michael Hurley, who has been a major contributor in defending the Patriots throughout the Deflategate scandal, ripped Kellerman in a column of his own, stating, “It’s not exactly an enlightened opinion to say that some day, eventually, Brady won’t be able to play professional football anymore. And the thing is, eventually one of these people chanting “THE END IS NEAR” will be proven correct. But that’s no different than predicting the sun will set and night will fall this evening. Congratulating yourself for predicting something that cannot be avoided is a fascinating route to explore on live television.”

Unfortunately for Kellerman, one take creates thousands more as his Twitter mentions exploded following his on air comments and just four days into his new job, created the latest ESPN “enemy” of Patriots Nation.

@Max_Kellerman @985TheSportsHub clearly trying to generate buzz 1st week as @RealSkipBayless replacement. Max is the only bum here. Move on

@Max_Kellerman @985TheSportsHub The point is ppl been saying toms done for years. How's that worked out?

Of course, everybody has a right to their opinions and beliefs, its one thing that makes sports so entertaining is the constant discussion it generates but these days ESPN appears to emphasize that ENTERTAINMENT more than the GAME of football on its First Take debating program but also lets not forget the last time somebody at Kellerman’s network doubted Brady and the Patriots.

By: Mark Morse
Practices for the East-West Shrine games are getting started. Here are prospects that you should look for during the week leading up to the game…
16 hours ago