2 weeks ago at 9:10 am ET
Follow @IanLogue
Posted Under: Patriots News 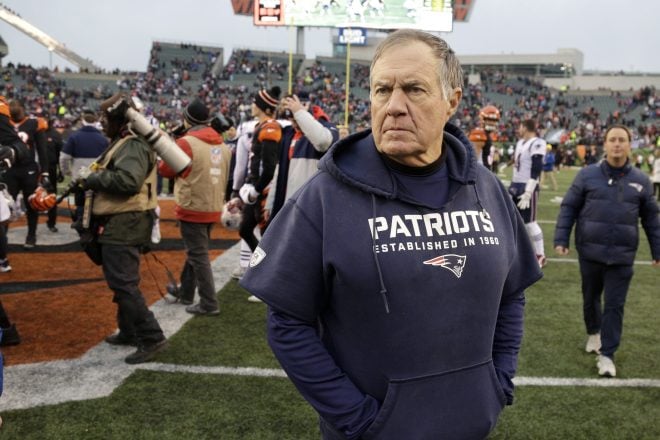 – For fans who will be attending training camp on the practice fields at Gillette Stadium in the coming weeks, it sounds like access to New England Patriots players is finally returning.  According to the guidelines posted by the team under the “FAQ”, “Autograph sessions are planned to take place after each day of practice.”  That’s a significant change considering that during the last two years of the COVID-19 pandemic, that hasn’t been an option.  It’s a fun opportunity for fans to get up close with the players, often leading to some memorable exchanges so it’s good to see this part of the experience finally back again.

– ESPN analyst Ryan Clark talked about Bill Belichick potentially being involved with the offensive duties this season and whether or not he could possibly handle being the guy to call the plays in 2022.  Clark pointed out during a recent segment on ESPN’s “Get Up” that Bill Parcells, who Belichick has obviously coached under, once did it but he doesn’t believe that necessarily means Belichick would be successful. “When you see something work before, like Bill Belichick got to see with the Bill Parcells calling plays, you think to yourself, ‘I’m as smart as this guy. I learned under this guy. This is something that I can do,’” said Clark via Sean McGuire of NESN.  “But sometimes ego can be what causes you to fail and pride comes before the fall. This is very unconventional.  This is almost saying we spit in the face of what we’ve always known coaching staffs to be. I think that Bill Belichick understands football enough to be able to coordinate, strategize and scheme offenses. But calling plays is not only a science, but it’s an art. It’s something you have to feel it’s something you have to vibe with, and doing it defensively and offensively is different. You have to be in tune with your quarterback, your players and understand what the situation needs at that time offensively.”  This entire situation remains one of the most scrutinized, with Matt Patricia and Joe Judge likely both set to spend the weeks ahead under the microscope.

– NFL analyst Louis Riddick also had some criticism with the situation, admitting that it’s something he believes is going to be challenging, both with the coaching and what he feels is a lack of an impact player on offense. “The Patriots’ lack of explosiveness on the outside was concerning going into last season, but I’m more concerned this year about who will be in the ear of Jones when it comes to his development and the playcalling.” wrote Riddick in a piece on ESPN+.  “ That continuity, relationship and chemistry is not easy to duplicate, and given the coaches Belichick is seemingly choosing from to take McDaniels’ place — including offensive assistants Joe Judge and Matt Patricia — I have significant concerns.”

– Meanwhile, analyst Mike Tannenbaum believes that Mac Jones could be a potential MVP candidate in 2022 and he’s a little more confident in Belichick and the group of players he has offensively.  “This is a team with two great running backs, two great tight ends, a really good offensive line and, in my opinion, a slightly underrated wide receiver corps,” said Tannenbaum via NBC Sports Boston.  “So I think the CEO of Bill Belichick will manage his team, they’ll have a great kicking game like always, and I think they have a young superstar at the quarterback position, who led the team last year to the playoffs, and they scored more points than the Patriots did with Tom Brady the year before.”  Jones having that type of season would certainly be great to see and the glimpses he displayed this past spring certainly should have evertyone optimistic enough to believe a productive season lies ahead.

– Former Patriots defensive back Asante Samuel appears to be a little bitter toward his former team, making some interesting comments on a recent episode of the “I Am Athlete” podcast.  Samuel said he never bought into the “Patriot Way” and said he was just here to get his money and take care of his family and that guys who bought into Belichick’s plan were “brainwashed”.  “Some of them [were] brainwashed with that Patriot Way. I’m not going for none of that. I don’t know what no Patriot Way is,” said Samuel via Hayden Bird of Boston.com.  One big issue Samuel apparently had was the fact the club wouldn’t give him a longer-term deal at the end of his rookie contract after signing the franchise tag prior to the start of the 2007 season.  “All of them [were] company men, talking about Patriot Way,” said Samuel. “I don’t know none of that. I’m here to get money, take care of my family, the same way Belichick is here to take care of his family, get his money. So when you try to hold my money back and you want all your money, I [have] no respect for you.”  Samuels’ dropped interception in the Super Bowl at the end of that season is one that will forever linger in the minds of fans who had to endure seeing “the helmet catch” occur on the next play.  That seems to have also been one of the most replayed games on NFL Network, which is a form of torture that doesn’t sting any less each time it airs.

– It sounds like the 49ers have come to their senses when it comes to quarterback Jimmy Garoppolo.  According to ESPN’s Adam Schefter, San Franscisco has granted permission to Garoppolo’s agents to seek out a trade for the quarterback.  While initial reports as of Wednesday had Garoppolo potentially sidelined until mid August, he has instead reportedly been cleared medically and is free to practice as soon as next week.  The big question is whether or not teams would be willing to take on his $24.2 base salary, especially this late in the offseason.  Either way, he’s getting closer to potentially leaving the Bay Area and getting a new start, which will likely change the outlook a bit for whatever team he ultimately goes to.  The Texans and Seahawks have been mentioned as possibilities, so we’ll have to see how it plays out.

By: Steve Balestrieri
"Christian's (Barmore) done a good job. He's way ahead of where he was last year...He has a much better understanding of what we do,
12 hours ago