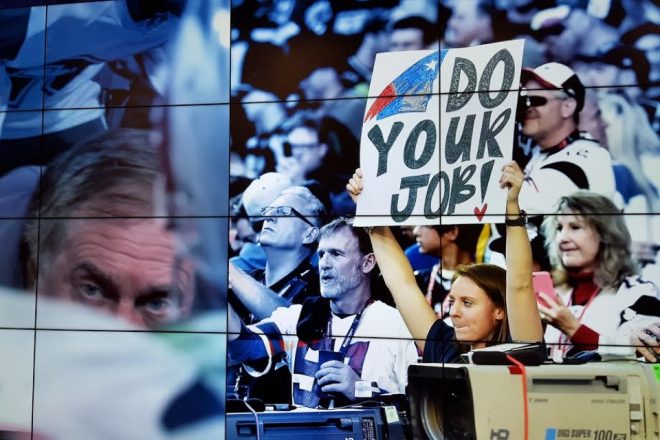 In a 180 degree swing from last week, all four home teams are favored in this weekend’s NFL division round playoffs. The Patriots are favored by 5 over KC, Denver by 6½ over Pittsburgh, Arizona by 7½ over Green Bay, and in the closest line Carolina – the team with the NFL’s best record – is only a 3-point home favorite over Seattle.

NFL Wild Card Round:
No Surprise That All The Road Teams Won

In the wild card round all four road teams won, and though some in the media are making a big deal about that fact, it should not have been a surprise at all. This season the NFL had not one, but two very sub-par divisions: the NFC East and AFC South. Somebody had to win both of those divisions, and both of those teams by default would host a playoff game – even if they were not one of the six best teams in either conference. That right there gives you two home underdogs, and those two clubs lost by a combined score of 65-18.

The two other games were nail biters, decided by two points and one point. Neither of those home teams had any winning playoff experience. Marvin Lewis now has a career record of 0-7 in the post-season, the Bengals have not won a playoff game in 15 years, and the Bengals were without their starting quarterback. Cincinnati was not favored and the only surprise was not that they lost, but the magnitude of their epic meltdown that snatched defeat from the jaws of victory. Minnesota was coming off of two losing seasons and has not won a playoff game since 2009.

More importantly, both of those home teams were playing experienced playoff clubs who finished the season hot. Pittsburgh is in the playoffs for the fourth time in six seasons, won four of their last five games, and averaged 32 points per game over the last half of the season. Seattle has won 46 games over the last four years, plus six more in the playoffs in the last three; the Seahawks finished the season 6-1, winning by an average of 32-14 during that span.

It is truly not surprising at all that the road teams won last weekend. Considering the circumstances the big news would have been if any of the home teams won.

NFL Division Round Playoff Odds:
Patriots favored by 5 over Chiefs

The Patriots opened as 5-point favorites, and as of Monday night the odds are fairly evenly split between 5 and 5½ points depending on where you visit. The over/under has dropped from 44½ to 42½, most likely due to weather predictions for snow/sleet/ice/locusts during the game. On an average money line you need to risk $240 to win $100 on the Patriots to win straight up, while a $100 bet on KC while return $200 should the Chiefs win.

The Cardinals annihilated the Packers two weeks ago in the same stadium, 38-8. Arizona’s defense dominated, recording nine sacks, four turnovers, and scored more points (14) than Green Bay’s offense did. Considering that result it is a bit of a surprise that the Cardinals only opened up as 7½ point favorites. On the other hand Green Bay has a much larger following and most fans bet with their heart rather than their head, and the latest memory for everyone was the Packers looking very effective – against a mediocre Washington defense.

As of Monday night the line had dropped to 7 while the point total remains steady at 50 points. A typical money line is Arizona -300 and Green Bay +250.

This is truly an intriguing matchup, between the two-time defending NFC champions and the team with the NFL’s best record this season. Carolina opened as 3-point favorites which means that on a neutral field the two clubs are seen as even. That line has for the most part remained steady, though a few venues have dropped the odds to 2½. The over/under has inched up from 43½ to 44, with a couple sites now at 44½. Most money lines have Carolina -145 and Seattle +125.

The final game of the weekend will be the most hyped, but unfortunately injuries will play a large part in the outcome. Ben Roethlisberger is hurt and will play, and will likely limp quite a bit even though it is his shoulder that is hurt. Peyton manning will gesticulate wildly and be lauded for being all-knowing, and then throw some wounded ducks. The Steelers are already without Le’Veon Bell and DeAngelo Williams; now it looks like Vontaze Burfict could be an honorary Bronco for taking Antonio Brown out of this game.

Denver opened as 5½ point favorites but the line has quickly shot up to 6½, with many now listing the Broncos as 7 point favorites. Considering the size of Pittsburgh’s fan base, that is really saying a lot about the injury situation, even when adjusting for the game being played at Mile High. The over/under is 41 and though the majority of betting sites have not yet listed a money line pending an injury report, the sites that do have a ML are at about Denver -250 and Pittsburgh +210.