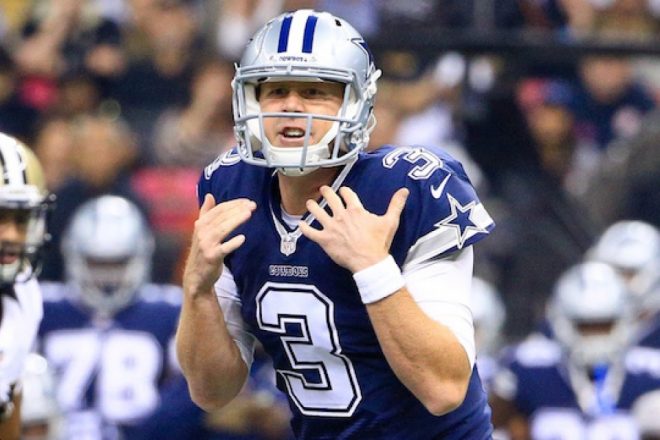 The Patriots are finished with their bye week break and now hit the road for back-to-back games, this week in Dallas against the Cowboys and then next Sunday against the Colts in Indianapolis.

The game is slated for a Sunday afternoon at 4:25 p.m. start time and we should see the top announcing crew of Jim Nantz and Phil Simms on CBS on the call which will be broadcast locally on WBZ-TV.

The Cowboys (2-2), dropped a heartbreaker to the New Orleans Saints 26-20 in overtime as RB C.J. Spiller caught a Drew Brees pass on the second play in OT and rumbled 80 yards for the winning score. Prior to overtime, QB Brandon Weeden led Dallas to a 90-yard tying touchdown drive after what was a predominately lackluster game.

The Patriots (3-0) were on their bye week but in their last action during Week 3 they blasted the Jacksonville Jaguars 51-17 as Tom Brady joined the 400 TD pass club.

Here are our Five First Impressions of the Cowboys:

Cowboys Banged Up, Injuries Piling Up: Injuries happen, it is a fact of life in the NFL but the rash of banged up bodies for the Cowboys can hardly be considered normal. They first lost top cornerback Orlando Scandrick during a training camp practice when he tore an ACL and was lost for the season. Then WR Dez Bryant, QB Tony Romo and DE Randy Gregory went down with different injuries.

On Sunday night in New Orleans, LB Sean Lee suffered a concussion and running back Lance Dunbar suffered a serious knee injury that is believed to have ended his season. WR Brice Butler who caught a 67-yard pass during the game tweaked a hamstring and is listed as day-to-day.

This is a good example of how fickle fate can be in the NFL; when the schedule came out, many were wondering how the Patriots would fare without Tom Brady who was facing a four game suspension. Now with his suspension vacated, Brady will start for the Patriots but it is the Cowboys offense that will be short-handed with the loss of both Romo and Bryant.

Dallas Defense Gets back McClain, Hardy This Week: It wasn’t all bad news coming out of Dallas this week. The defense received the good news that LB Rolando McClain and DE Greg Hardy will return from suspensions this week.

McClain’s suspension was also tied in with off-season knee surgery that caused him to miss much of the off-season workouts. He was the second leading tackler on the Cowboys last year with 108. Hardy was suspended under the personal conduct policy but it is his prowess at rushing the QB that caused Dallas to take a chance on him. Hardy has 27 sacks in his last 32 games and he’ll provide the Cowboys pass rush a huge boost. Fellow DE Gregory will also return to practice on Tuesday where the Cowboys will hold a walk-thru with the first major practice coming on Wednesday.

Getting Hardy and possibly Gregory back this week will be a big addition for the defense that will be expected to keep the Cowboys in the game on Sunday given the injuries on the offensive side of the football to Bryant, Romo and Dunbar.

With Lee going thru concussion protocols this week and his status uncertain, getting McClain back will definitely help out the defense as well although Anthony Hitchens, filling in for Lee on Sunday was very active, making plays all over the field.

Offensive Line Taking Heat For Underperforming: The Dallas offensive line was among the best, if not the best in the NFL last season. Running back DeMarco Murray led the league in rushing. Tony Romo and Dez Bryant both turned in outstanding 2014 seasons that had the Cowboys within a controversial dropped pass call of going to the NFC Championship Game.

This year they just haven’t had the same dominance that one was expecting from the unit. Of course not having Romo and Bryant on the field has given opposing defenses the options of stacking the box without having the fear of their passing game. Murray now with the Eagles (you think he’d like to have a do-over?) lost the team a big runner as well.

Facing the Saints last week, Christine Michael only got a single carry, with the team relying on Darren McFadden mainly for blitz pickups. Look for the OL to try to regain some of their mojo with Michael this week against a Patriots team that hasn’t been great against the run.

Brandon Weeden May Be Looking Over His Shoulder: The Cowboys journeyman backup didn’t play exceptionally well but was ok against a so-so Saints defense until late in the fourth quarter when he led a 91-yard drive to tie the score. He finished the evening 16-26 for 246 yards and touchdown against New Orleans.

The offense is more limited with Weeden under center, which isn’t surprising. Relying more on the passes of the shorter variety, Weeden has completed 76 percent of his throws so far 45-59 for 551 yards and two touchdowns and one interception for a QB rating of 108. But in the NFL numbers at times can be deceiving. QBs have to win and Weeden as a starter has not. He’s now 0-10 in career starts. He’ll be looking for that elusive first win this week.

And if he falters this week, he may be looking at former Patriots backup Matt Cassel coming in on relief. After Romo went down the Cowboys brought in Cassel from the Bills to backup Weeden. But after a crash course in the Cowboys’ offense the past few weeks, it would not be inconceivable to see Brady’s former understudy come in if things don’t go well for Weeden.

Weeden will be looking to have a solid game and hold off Cassel until the time where Romo returns. In a NFC East where Dallas (2-2) is still in a tie for first, he won’t have the luxury of having very many more losses. So the pressure is on for him.

Check back later this week, we’ll have all the key matchups in our Razor’s Edge breakdown of the Cowboys – Patriots game as well as our prediction.

By: Mark Morse
The Offensive Line has been a source of controversy this off-season.  Start with the trade of Shag Mason, which Kristopher Knox of Bleacher Report labeled…
9 hours ago

By: Ian Logue
Seeing Patriots QB Mac Jones work with his teammates as a second-year player is just impressive, as Jones is completely in command of things out…
10 hours ago