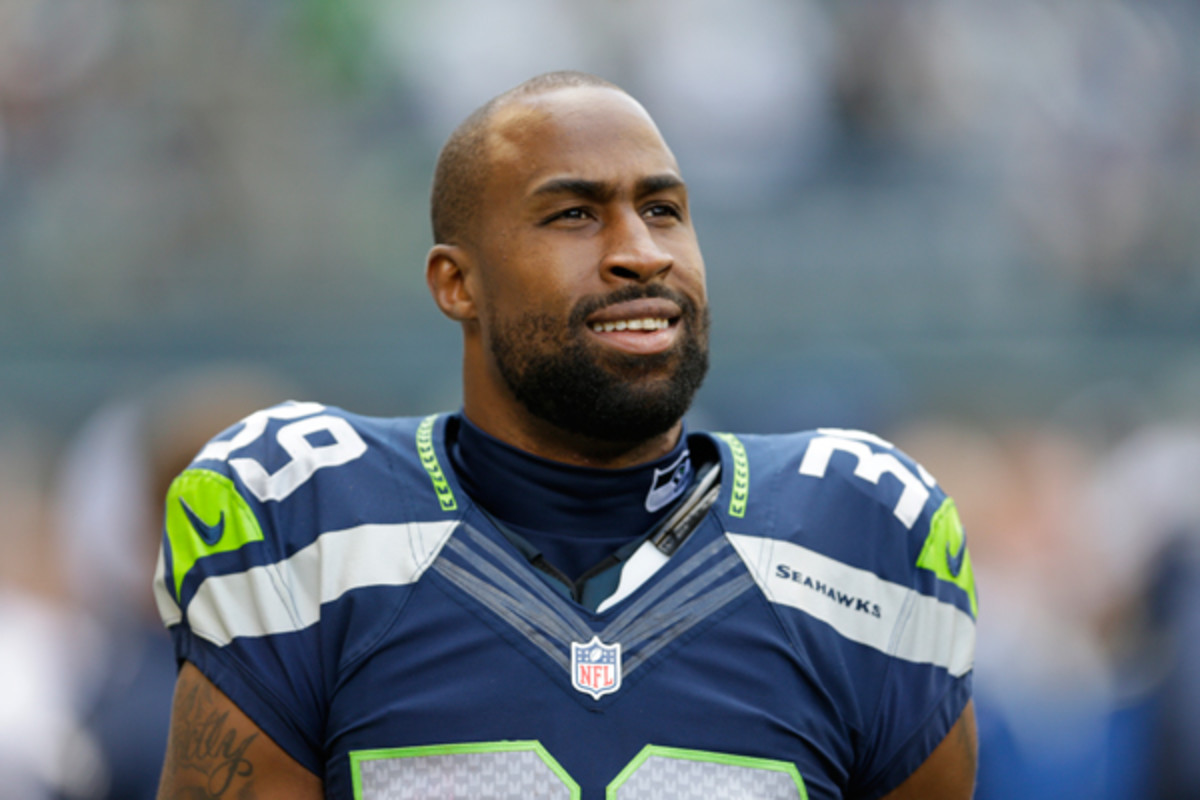 Brandon Browner just got another chance in the NFL. (Ted S. Warren/AP) Cornerback Brandon Browner's time with the Seattle Seahawks ended ignominiously when he

www.si.com
​
Cornerback Brandon Browner's time with the Seattle Seahawks ended ignominiously when he was suspended indefinitely last December for multiple violations of the NFL's substance abuse policy. Browner had first been suspended in late November, and was facing a possible year-long suspension as a Stage 3 offender in the NFL’s drug program. Browner was suspended four games late in the 2012 season for a violation of the league’s policies against performance-enhancing substances, which is separate from the NFL’s drug policy. As a result, he missed the Seahawks' run to the Super Bowl and the franchise's first NFL championship, though Seattle's defensive excellence was something that he helped build.​
​
On March 4, Browner tweeted that he had been reinstated by the NFL, and he will serve a four-game suspension to start the 2014 season -- that was going to happen no matter where he went. The New England Patriots were apparently undeterred by this, signing Browner to a three-year, $17 million deal on Friday evening. Browner had been meeting with the Pats since Thursday, and the Redskins and Saints also expressed interest.​
​
The Seahawks plucked Browner out of the Canadian Football League in 2011, and the 6-4, 221-pound defender made the Pro Bowl in his first season in Seattle. Through 2011 and 2012, Browner and Richard Sherman combined to make life very, very difficult for opposing receivers with their size and aggressiveness.​
​
Browner’s suspension is also more complicated story than is typical. When he first came into the league in 2005, he failed a drug test while in the Denver Broncos’ employ. The Broncos released him in 2006. After that, according to a source familiar with the situation, Browner ran low on money and was sleeping on friends’ couches to stay solvent while he waited for another shot at pro football. He was automatically placed in Stage 3 of the program because he missed multiple notifications for drug tests when his cell phone service apparently lapsed. Browner played with the Calgary Stampeders of the Canadian Football League from 2006 through 2010, and maintained his Stage 3 status when he returned to the NFL with the Seahawks in 2011.​
​
Browner passed multiple tests per week from 2011 through 2013 without a hitch, but failed another non-PED test, and that tripped the year-long suspension. Had he not missed those notifications years ago, he would face a few missed game checks at best, and a four-game suspension at worst. Browner’s appeal concluded in late November, and the Seahawks had been awaiting a result for almost a month.​
​ 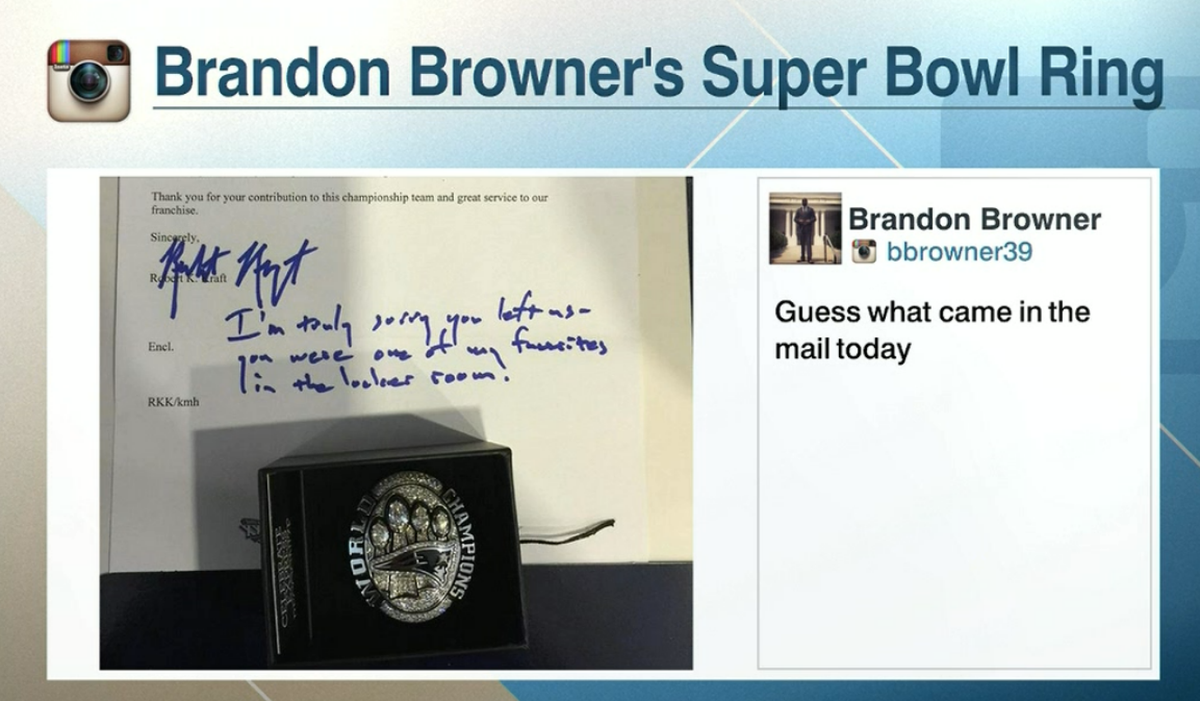 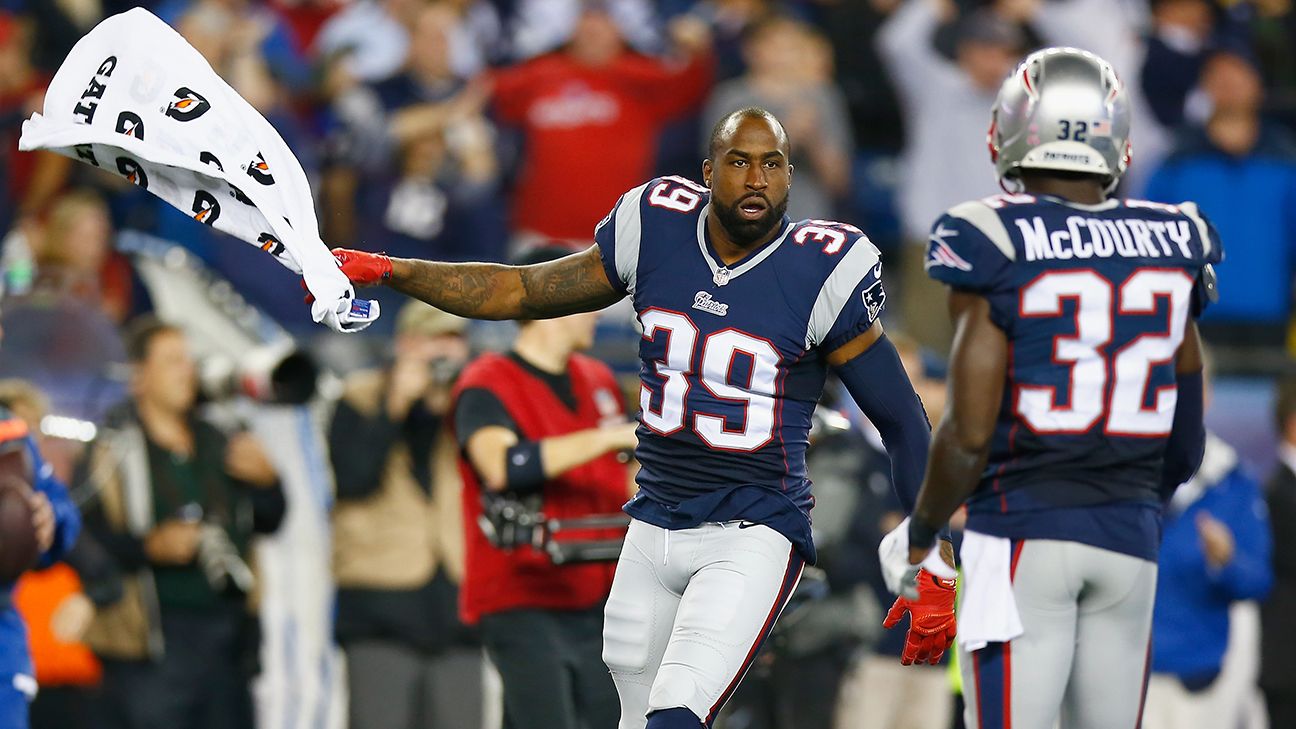 The New Orleans Saints signed former New England Patriots cornerback Brandon Browner to a three-year contract -- their first new free-agent addition in an offseason that has so far been dominated by subtractions.

www.espn.com
​
The New Orleans Saints signed former New England Patriots cornerback Brandon Browner to a three-year contract -- their first new free-agent addition in an offseason that has so far been dominated by subtractions.​
​
Browner's three-year deal is worth $15 million, including $10 million guaranteed, a source told ESPN NFL Insider Adam Schefter.​
​
Browner becomes the second starting cornerback from the Super Bowl champion Patriots to leave the team this week. Darrelle Revis signed a five-year, $70 million contract with the New York Jets earlier this week after the Patriots declined his $20 million option for 2015.​
​
Browner, 30, is a big, physical corner (6-foot-4, 221 pounds) who made the Pro Bowl in 2011 and played for the past two Super Bowl championship teams. He spent last year with the Patriots after spending the three previous seasons with the Seattle Seahawks.​ 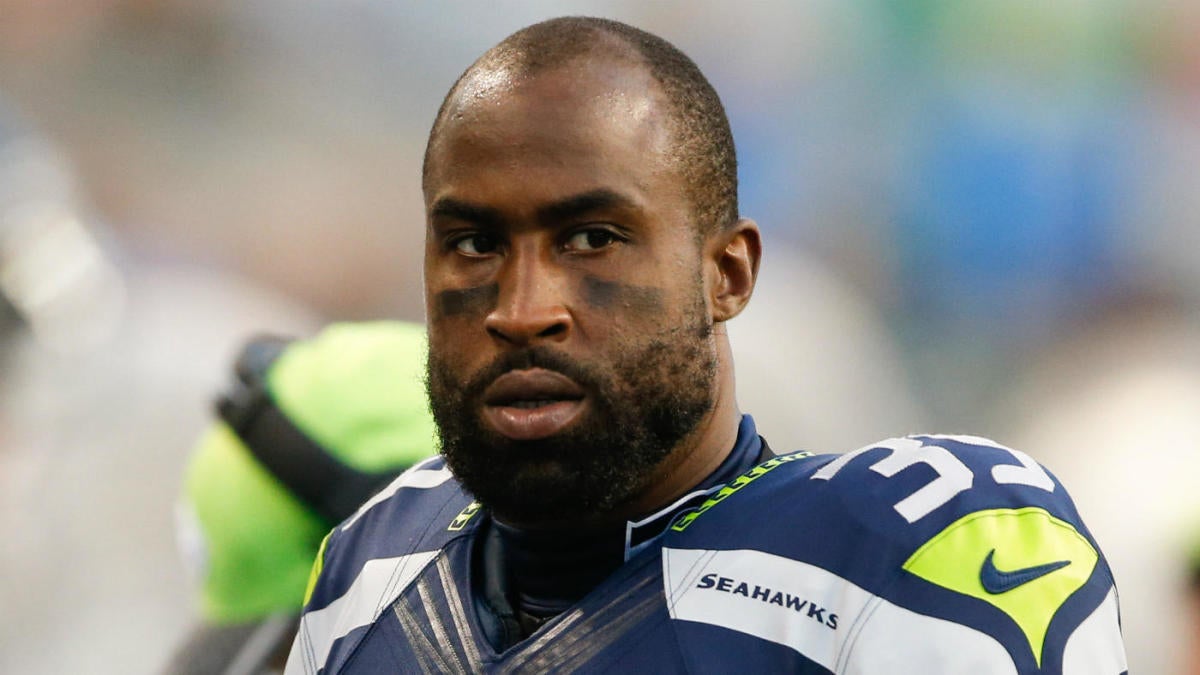 www.cbssports.com
​
Browner "pled no contest to 1 count of attempted murder and 2 counts of willful child endangerment" when he appeared in court Tuesday, in exchange for having three other charges dropped.​
​
As a result, the former NFL cornerback received eight years in prison.​
​
Reports at the time indicated that Browner "allegedly physically harmed and made threats to kill the victim inside the residence" and stole a $200,000 Rolex watch.​
​
As it turns out, Browner broke into the house of an ex-girlfriend about 30 miles east of Los Angeles in La Verne and allegedly threatened to kill her. The woman's two children were present when the incident occurred.​
​
Browner, who had been arrested multiple times in the previous calendar year, won multiple Super Bowls, one with the Seahawks (the original LOB victory over Peyton Manning's Broncos) and another with the Patriots (the following year on the infamous goal-line interception of Russell Wilson).​
​
The former Pro Bowler was an undrafted free agent out of Oregon State in 2005, where he was a highly penalized defensive back. He would get picked up the Broncos, but put on IR before he could play for Denver. Browner would eventually spend several years in the CFL before returning to the NFL as a member of the Seahawks' famed secondary.​
​
He spent 2015 with the Saints, where he set an NFL record for most penalized player in league history, but has not played in the NFL since.​

During the 2001 draft the Patriots traded down 31 spots, sending their fifth (149th overall) to Detroit for the Lions' sixth (180th overall) and a seventh (216th overall). The Pats used the former on tight end Arthur Love and the latter on kicker Owen Pochman.

Neither made it to the 2001 week one roster for New England. Love in fact never played in the NFL at all, while Pochman played in a total of 16 games for the Giants and 49ers.

Granted, it was only a seventh round draft pick. But why?

Why not use the pick on one of your soon to be undrafted rookie free agents?

Or don't make the trade, and use the fifth round pick on OL Russ Hochstein, WR Cedrick Wilson or QB AJ Feeley?

Better yet, tell Detroit you make the deal only if they send you their 2002 fourth round pick.

Maybe this decision was the 'chip on the shoulder' incentive that fueled Adam Vinatieri for the next two decades. 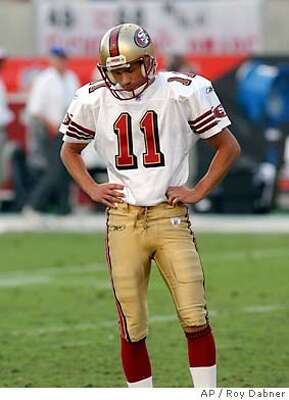 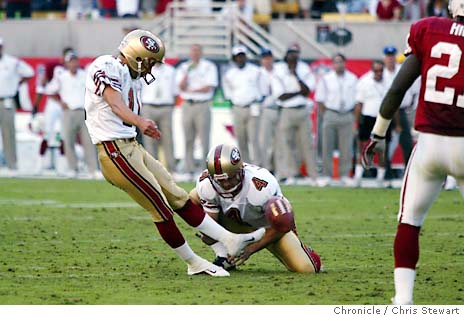 Expect 49ers to have another kicker today

There might have been worse performances by special teams in general and kickers in...

www.sfgate.com
​
So long, Owen Pochman. We hardly knew ye.​
​
"I've not seen a kicker influence a game negatively as dramatically as today," 49ers general manager Terry Donahue said, and no one could dispute that after the 49ers lost 16-13 in overtime to the Arizona Cardinals.​
​
Donahue's comment called for clarification.​
​
Did he mean, uh, ever?​
​
"Not in my career," he said.​
​
At least Donahue still has a career. Pochman, a 24-year-old left-footed kicker, is starting today on his post-49ers career. He missed a 45-yard field- goal attempt in the second quarter, missed a potential game-winning, 35-yard field-goal attempt with 2:25 remaining in the fourth quarter, and then ended his career in San Francisco by kicking off out of bounds to begin the overtime, setting up the Cardinals at their 40-yard line.​
​
For the record, Pochman's last kickoff was supposed to be deep down the middle, said special-teams coach Larry Mac Duff. Well, it was neither deep nor down the middle. It bounced out of bounds around the 15-yard line.​
​
"Special teams weren't very damn special," coach Dennis Erickson said.​
​
Strange how things turn out. A year ago, the 49ers drafted Jeff Chandler. In the first two games this season, Chandler made six of seven field-goal attempts. Nevertheless, the 49ers wanted a stronger kickoff leg, so they replaced Chandler with Pochman.​
​ 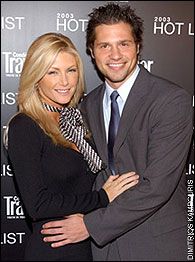 www.hiltonhyland.com
​
After a five year career in the NFL, Owen began his initial foray into real estate as an investor, buying and flipping property in Los Angeles and Las Vegas. Having played at the highest level in professional football, Owen has built a broad-ranging clientele consisting of seasoned real estate investors, athletes, and entertainers.​
​
A graduate of Brigham Young University, Owen was drafted by the New England Patriots as a place kicker. He went on to play for the New York Giants and the San Francisco 49ers. Combining his sports background with his passion for architecture and design has allowed Owen to flourish in the real estate market. That, coupled with his instincts, persistence, and vast knowledge of the Los Angeles market has led to sales throughout the city, spanning from the beach to the Hollywood Hills.​
​
Thriving on a challenge, Owen is a dedicated and relentless professional when searching for the perfect property for his client. Committed to delivering the highest level of personalized service to his clients, Owen diligently approaches every transaction with the same focus and work ethic.​ 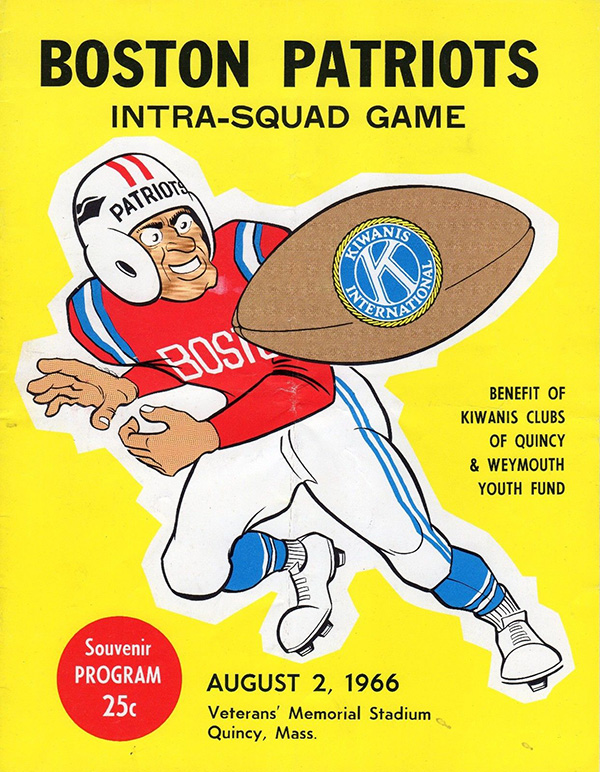 Some Patriot draft connections include:


Others born on this date with New England connections include:

Elmer Volgenau (8/2/00-12/6/65)
Born in New Haven
Colgate educated Elmer Volgenau was a lineman in the twenties for the Rochester Jeffersons, a franchise that went winless in the NFL for four consecutive years before the owner lost so much money on the team his house went into foreclosure, and the football team ceased to exist.


Other pro football players born on this date include:

Billy Cannon (8/2/37-5/20/18)
The Heisman Trophy winning running back from Oklahoma tilted the balance of power when he signed with the upstart American Football League in 1960. Cannon was part of three victorious AFL championships, two with the Oilers and one with the Raiders.