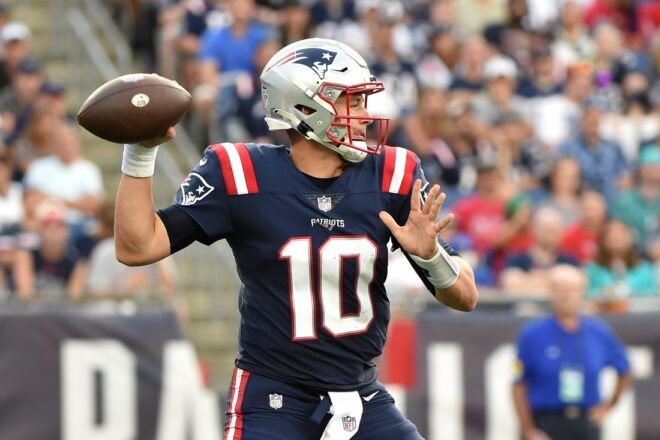 Good morning, and as this is being written (Friday evening), we’re looking forward to watching some good football games on Saturday and Sunday, as the Divisional Round always seems to provide some great entertainment.

My predictions for the games are below; by the time this prints, the Saturday games will already be in the books. However, with the Patriots, they are already trying to build for the 2023 season.

The first and most important thing they need to accomplish is getting the coaching staff on the offense in place. After that, the staff can sit down and self-scout, evaluate their players and decide how best to proceed in terms of free agency and the draft.

DeMarcus Covington: The Patriots’ DL coach has been named as the Defensive Coordinator for the upcoming Senior Bowl. Covington is an up-and-coming coach who has been with New England since 2017 and has been the DL since 2020.

It will be a win-win for the team, Covington will get some valuable experience as a DC, which he should begin to get some interviews as one soon, and he’ll also get a close look at some of the defensive prospects during the bowl week. Meanwhile, the rest of the New England coaching staff will be in Vegas coaching the East-West Shrine Bowl.

Rob Gronkowski: The former Patriot and Buccaneer star has been trending on social media due to some of his recent comments. Gronkowski was appearing on a podcast with Kay Adams, “The Up and Adams” show, and had some interesting things to say about playing in New England under Bill Belichick.

“A regular season game with the Patriots actually, throughout my 20s, if we won a game, the next day it felt like we still lost a game,” Gronkowski said. “And if we lost a game, it felt like you were in super depression for like two days … or like for the whole week.

Boyer spent more than 10 years on Bill Belichick’s staff before leaving with Brian Flores. Gregory and McKenzie both played for the Patriots. Gregory was the safety who returned the infamous “Butt Fumble” for a TD against the Jets. McKenzie was drafted by New England in the 3rd Round of the 2009 draft. He tore an ACL in minicamp, and never played a down for the team.

Mac Jones: The Patriots’ QB made a rare post on Instagram that got a lot of positive reactions from his teammates. Jones posted a pic of him running out of the tunnel with his teammates before a game at Gillette Stadium, and the title of the post was “IF,” a poem by Rudyard Kipling to his son.

If you can keep your head when all about you

Are losing theirs and blaming it on you;

If you can trust yourself when all men doubt you,

But make allowance for their doubting too:

If you can wait and not be tired by waiting,

Or being lied about, don’t deal in lies,

Or being hated don’t give way to hating,

And yet don’t look too good, nor talk too wise;

If you can dream—and not make dreams your master;

If you can think—and not make thoughts your aim,

If you can meet with Triumph and Disaster

And treat those two impostors just the same:

If you can bear to hear the truth you’ve spoken

Twisted by knaves to make a trap for fools,

Or watch the things you gave your life to, broken,

And stoop and build ’em up with worn-out tools;

If you can make one heap of all your winnings

And risk it on one turn of pitch-and-toss,

And lose, and start again at your beginnings

⁠And never breathe a word about your loss:

If you can force your heart and nerve and sinew

To serve your turn long after they are gone,

And so hold on when there is nothing in you

⁠Except the Will, which says to them: ‘Hold on!’

If you can talk with crowds and keep your virtue,

Or walk with Kings—nor lose the common touch,

If neither foes nor loving friends can hurt you,

If all men count with you, but none too much:

If you can fill the unforgiving minute

With sixty seconds’ worth of distance run,

Yours is the Earth and everything that’s in it,

⁠And—which is more—you’ll be a Man, my son!

The poem by Jones was also posted in his locker all season. And it is one of my favorites by Kipling, along with “Boots”… good stuff by Mac. 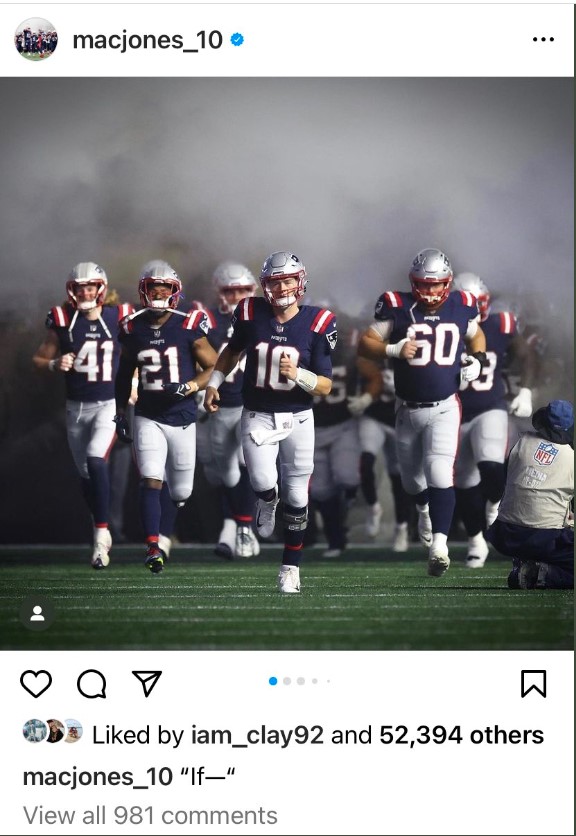 Patriots 4th & 2 Podcast: If you haven’t checked out our PatsFans.com podcast, “Patriots 4th & 2”, in a bit, please check it out. Russ, Derek, and I looked at the Patriots’ biggest needs moving forward.

Finding the Next Offensive Coordinator —

This is a critical year for the Patriots and for Mac Jones. After a promising rookie season, Jones and the offense regressed in 2022. Still, it was hard to get a really accurate assessment of Jones’ Year 2 performance, considering the offensive coaching staff and the state of the offensive line. Was Jones blameless? Not hardly. However, when looking at the Patriots’ offense as a whole, Jones was not the cause of the issues.

That’s why finding the right offensive coordinator is critically important this year. Getting a good coordinator who will undoubtedly bring along a good QB coach and the right players to work within the system will be the ultimate measuring stick.

Good, really good offensive coordinators just don’t call plays. They are teachers first. They have an excellent grasp of the offensive system and can coach the players on the best way to produce. They put their QBs in the best position to succeed, which was questionable this past season.

They’ll know that Mac Jones is a pocket passer, and he’ll need to have good perimeter targets and solid protection by the OL, which starts with the tackles. Then build an offensive system that allows Jones to produce to the best of his ability. That’s why getting a good coordinator in the building ASAP is imperative. The OC has to evaluate everyone on the offensive side and determine who is the best fit and where they need upgrades.

The OC has to have confidence in the QB to run the system and vice versa to be successful, and this is where the communication has to be smooth.

O’Brien is considered the favorite because of two factors. One is that he is familiar with Bill Belichick, who served on the Patriots from 2007-2011 and was the Patriot’s OC in 2011. He knows the Patriots’ system, language, and terminology. Plus, he has a brief history with Mac Jones at Alabama. But it is hardly a sure thing.

One guy who would be under the radar would be Shawn Jefferson, who played for the Patriots and was on the Super Bowl team that lost to the Packers. Calvin “Megatron” Johnson credited Jefferson with great coaching that allowed him to break the single-season record with 1964 yards receiving in 2012 with the Lions. He would be an outside hire and an intriguing one.

Also checking that outside hire block is Keenan McArdell, who played for Belichick in Cleveland and coached under some FOB (friends of Bill). He also got some very lofty praise from Belichick in 2005, as cited by NBC Sports Boston’s Phil Perry.

The slate of games for Wild Card Weekend and my predictions are straight up for this week.

“DeMarcus does a really good job,” said head coach Bill Belichick when asked about Covington this past season. “He’s coached linebackers, coached defensive line, really understands the entire defense. I’m sure he could coach a lot of positions on defense. A young guy that’s really smart, and works hard. Has worked with, again, a lot of different types of players, even on our defensive line. That difference between our interior guys and our outside guys is quite distinct. Pass rush, pass coverage, interior run play, so forth… It’s a lot of different techniques to coach. He’s very well-versed in the fundamentals and schemes. He does a good job. Really glad we have him.”

Patriots head coach Bill Belichick asked during the 2022 season about DL coach Demarcus Covington, who was named as the Defensive coordinator for the upcoming Senior Bowl.

By: Mark Morse
Today I am going to give a wrap-up of the East-West Shrine game practices.  The Patriots coaching staff has been very hands-on.  Steve Belichick arrived…
9 hours ago