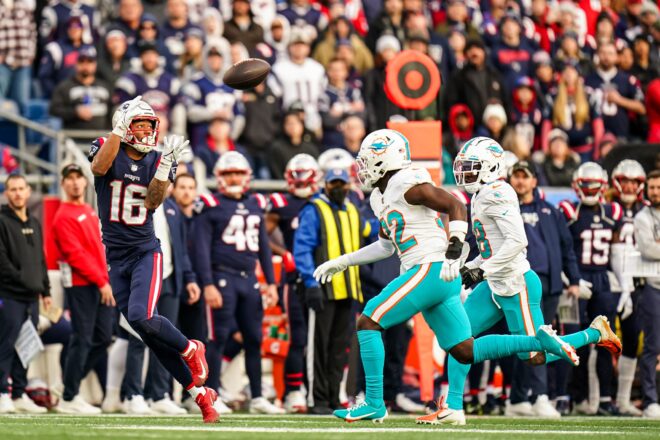 After back-to-back weeks of heartbreaking losses, the New England Patriots earned a much-needed win in the 2022 season home finale at Gillette Stadium. The 24-21 victory over the Miami Dolphins keeps the Patriots’ playoff chances alive, with a win in Week 18 against the Buffalo Bills sealing the final spot in the AFC.

In the running game, for the first time in weeks, Rhamondre Stevenson and Damien Harris split the workload, combining for 74 yards on 17 carries.

The defense meanwhile, like they have all season long, helped picked up the slack for an offense that has struggled to generate points.

Despite missing three key players in the backfield, safety Kyle Dugger recorded the seventh Patriots defensive touchdown of the season on a 39-yard interception return in the third quarter that proved to be the difference. Cornerback Jonathan Jones recorded a highlight-reel interception of his own in the contest.

“We’re still alive.” center David Andrews said after the game. “It was a tough game, we really fought hard, hats off to them [Dolphins] they had a pretty good game plan coming in and did some things to challenge us. The defense obviously, Kyle, a huge play by Kyle, and then we were able to put that drive together at the end to go ahead. Overall a good team win”.

You can view all of the best social media moments below.

This photo is from Sunday, by The @BostonGlobe's Jim Davis. I don't think there's anyone on the local sports scene, regardless of role, who's better at what he or she does than Jim. pic.twitter.com/sdMcpVqhOv

Dugg is a playmaker!

A complete list of players with 3 defensive touchdowns scored this season:

🏈His 3rd Def TD of the season – ties franchise record.

The Patriots have 7 defensive touchdowns in 2022, the most in franchise history and the most by any team since the 2017 Jaguars (who New England beat in the AFC Championship game).#ForeverNE @Patriots

Mac Jones and Christian Wilkins hug it out and Matthew Judon is his usual happy self postgame. The Pats beat the Dolphins and stay in the mix for a playoff spot! pic.twitter.com/Bn4bwjctLh

All he does is make plays. With #Patriots safety Kyle Dugger on remaining in the playoff mix, his pick 6 and a defense that scores just about every week. pic.twitter.com/BpjsVVjcps

The old guy on social media has something to say 😂 pic.twitter.com/HHEQcjYttK

📹 From #Patriots 5th Quarter – Devin McCourty spending some time out on the field with his family after what could be his final game at @GilletteStadium #WBZ @RochieWBZ @MikeReiss @JasonMcCourty pic.twitter.com/qFgpOpK4Ge

Apparently this lady ran onto the field and got arrested today.