1 month ago at 7:40 am ET
Follow @SteveB7SFG
Posted Under: Patriots Report Card 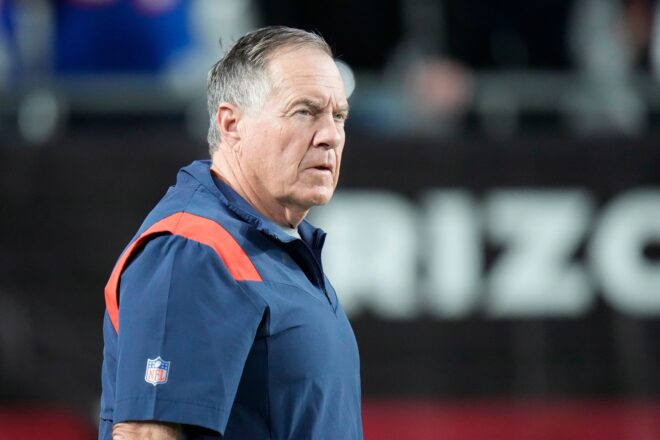 The Patriots melted down in a style typical of the Raiders in the last two minutes of the game, blowing a seven-point lead and allowing a bizarre TD in the last second in a horrible play that will live on and on, thanks to social media.

However, it wasn’t the final play that was the outlier. That was just the “pièce de résistance” in a game that was chock full of blunders. Scott Zolak characterized what transpired as “This might be one of the dumbest teams I’ve ever seen,” Zolak said after the game.

The same mental mistakes, the bad situational football, and the same undisciplined football are all glaring and have been there since Week 1. Either A. They have bad players who are in need of being replaced. B. The players aren’t paying attention. C. This results from bad coaching or D. All of the above.

Mac Jones started off the game horribly, badly missing several throws, including two in the end zone. He was wildly inaccurate for large parts of the game, and after his outbursts last week, he didn’t look good this week.

A couple of plays that were some excellent throws saved him from an even lower grade. The pass to Jakobi Meyers down the seam was a beauty that went for 39 yards. His pass to Tyquan Thornton for 21 was also a really nice throw. One of his best throws didn’t count.

On a play that Bill Belichick said he called a time out because the team didn’t have it right, they executed beautifully, with Jones hitting Meyers with an excellent throw for what would have been a TD. That is the 2023 offense in a microcosm.

Rhamondre Stevenson was injured last week and missed practice until Friday, and he was considered questionable until game time. So, all he did was rush 19 times for 172 yards, including an outstanding 34-yard TD run that put the Patriots up 24-17 late in the 4th quarter. He was outstanding in this game forcing broken tackles and yards after contact (126).

With Damien Harris still out with an injury, rookies Pierre Strong and Kevin Harris once again got some valuable reps and experience. Strong had four carries for 25 yards (6.1-yard avg.) while Harris had five carries for 19 yards.

Overall, the Patriot backs gained 216 yards on 28 carries. But the grade was knocked down because of Stevenson’s ill-advised lateral to Jakobi Meyers, when he admitted that the playcall was a draw and play for OT.

The wide receivers were going against a Las Vegas pass defense that ranked dead last in DVOA. And combined the unit contributed only 4 catches for 71 yards. That is not going to get it done against anyone, especially against a bad pass defense.

The entire unit continues to have trouble separating from opposing secondaries. Granted Jones’ accuracy was a big issue but the lack of separation has been an issue for much of the season

The Patriots’ tight ends combined for just four catches for 33 yards on seven targets. Jonnu Smith had two catches for 24 yards, while Hunter Henry had two for nine. Henry returned after getting poked in the eye early in the game. He wore a visor for the rest of the game.

Smith was flagged on the Mac Jones QB sneak at the one-yard line for not being set. While Jones should have waited until Smith was set, the tight end initially lined up in the wrong spot.

The Patriots offensive struggles didn’t fall on the offensive line for once. Raider pass rushers Maxx Crosby and Chandler Jones had zero sacks and only seven combined pressures in the game. Crosby had just three QBs hits, while Jones had two. Neither had a tackle for loss (TFL). If we said they’d have zero sacks, we’d have thought that this would have been a New England victory.

Connor McDermott held up pretty well, lining up with Crosby, while Trent Brown also played well against Jones. The group was helped by Jones getting the ball out quickly; an average of only 2.57 seconds.

The running game gashed the Raiders for 226 yards, a season high, allowing the backs to get to the second level. Stevenson took over from there, using his power to drag defenders or break tackles.

The Patriots’ defensive line got Christian Barmore back from a knee injury and he bolstered the overall play of the unit. After Josh Jacobs started the game off well, the Patriots really tightened things up and held him to 93 yards on 22 carries.

Lawrence Guy had a very strong game up front with six tackles, a half-sack and two QB hits. Barmore and Davon Godchaux each had a half-sack.

The pass rush started off slowly but really notched it up in the second half, getting after Derek Carr and forcing him to unload the ball frequently. Ja’Whaun Bentley had a big game, making 10 tackles, a sack, a QB hit and a TFL.

Josh Uche was a factor once again, forcing pressure on Carr and notched another half sack and drew a double team that allowed Bentley to bust in for a sack. Matthew Judon was used very differently in this game, mainly as a decoy to draw blockers to him, and then dropping into coverage (nine times).

The Patriots’ secondary held Carr to just 150 yards passing for 58 minutes. In the next minute and a half, they allowed 81 including a touchdown (?) in the corner of the end zone. While the decision to play Marcus Jones so far off the line was questionable (very) on the Raiders 4th and 10, the secondary allowed Carr to complete 8-9 on that final drive.

Kyle Dugger had a fantastic read on a short Carr pass in the 3rd quarter and picked it off for a pick-six that put the Patriots right back in the game at 17-10. The secondary held Devante Adams to just four catches for 28 yards.

Jonathan Jones didn’t have a great game, allowing receivers to get behind him but Carr’s inaccuracy issues didn’t make him pay.

Nick Folk was excellent in this game going 3-3 on FGs including a 54-yarder and making his only PAT attempt. Michael Palardy averaged 45.2 yards per punt.

The kick coverage units didn’t have a great night with Ameer Abdullah, allowing a couple of 30 yard returns. Although overall he only averaged 22.2 yards on five KRs. The punt coverage units were solid allowing only an average of only 6.7 yards per return.

But the blocked punt decimated this grade. With less than a minute to go in the first half, the Patriots lined up for a punt. LS Joe Cardona snapped the ball before anyone was even set, allowing the Raiders to easily rush in and block the punt setting them up for a too easy TD and a 17-3 lead at the break. It was a terrible example of situational football.

When Scott Zolak calls the team that he played for and now does the games on the radio “the dumbest team I’ve ever seen” on the air, that is truly saying something. The mental mistakes continue, along with terrible coaching decisions and play concepts.

The Patriots are always one of the best teams at situational football, yet this game was littered with awful examples of that. I thought the embarrassing sequence at the goal line, where they called two time-outs and had one TD called because of their own time-out and another because of a false start penalty, was the worst that could occur in the game.

But then we had the lateral nonsense with the score tied. While Stevenson, Meyers, and Mac Jones all took responsibility for the play when they admitted that the coaches told them to play for OT, their failure was due to coaching and the players not paying attention. Either way, it was even more embarrassing for the team and Bill Belichick.

We’re on to Cincinnati.