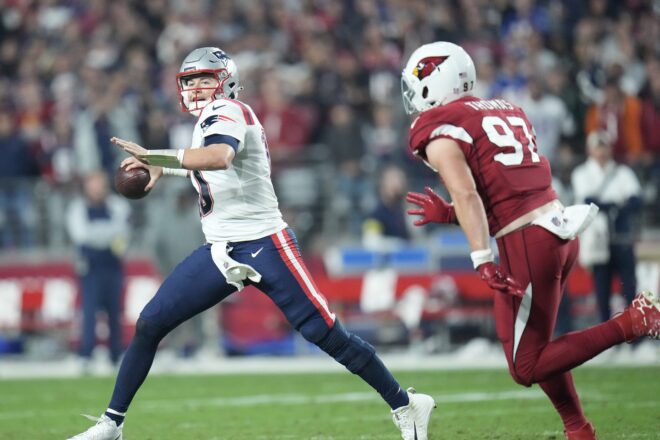 The New England Patriots snapped their two-game losing streak with a 27-13 win over the Arizona Cardinals on Monday Night Football and moved back into the final playoff spot in the AFC.

On offense, quarterback Mac Jones completed 24/35 passes for 235 yards but threw his first interception in five games. Before the turnover, Jones had gone 161 pass attempts without an interception for the longest active streak in the NFL.

The Patriots running back depth got tested after Rhamondre Stevenson was limited to three carries after sustaining an ankle injury. Damien Harris was also unavailable for the contest due to a thigh injury. In their absence, rookies Kevin Harris and Pierre Strong combined for 12 carries on 96 yards with a rushing touchdown each.

“Yeah. It was great,” Bill Belichick said when asked about Harris and Strong contributing. “They got an opportunity and made some big plays. We’ll see if they can sustain it, show up week after week and people will start looking for them.”

As for the play of the game? Linebacker Raekwon McMillan returned a “scoop and score” touchdown 23 yards to the house following a forced fumble by safety Kyle Dugger on All-Pro receiver DeAndre Hopkins.

You can check out all the best moments shared across social media throughout the night below.

Matthew Judon. What a look. pic.twitter.com/MczVWXfRPE

Mac Jones was not stoked about having to take a timeout there. 🤬🤬🤬🤬🤬 pic.twitter.com/Ei5gnh5zFr

@Kwon_daTRUTH aye I see you with the tight rope!!

Are you not entertained?!?😳😂 https://t.co/dpgcLIC4Rg

Yeahh Pierre get you one!!

Matthew Judon (14.5) and Josh Uche (10.0) became the first pair of teammates to reach double digit sacks in the NFL this season.

Matthew Judon and Josh Uche both have 10+ sacks this season. It's the first time since 2011 (Andre Carter, Mark Anderson) and just the fourth time in team history, that two #Patriots players have logged double digit sacks in a season.

Josh Uche had 3 sacks tonight and is the first player to have at least 2 sacks in back-to-back games since Trey Flowers in 2016. He and @man_dammn now have double-digit sack totals in 2022. It’s the 4th time in team history the Pats have had 2 players with at least 10 sacks 1/2

With their top two WRs and RBs out, the Patriots found a way to get a tough road win on Monday Night Football, and Mac Jones was pretty happy with the outcome pic.twitter.com/JKJdwJRF8w

Signs of (good) times for @Patriots fans after a 27-13 win in Arizona. As always, great support on the road by Pats fans from all over the world. pic.twitter.com/hX48kFQzGT

Nothing to serious I’ll be alright appreciate the love and support fr ! 💙❤️

“It was a team win and we’re going to watch the film and get better.”

Oh, what a (Monday) night 🏈 pic.twitter.com/H6BfaLbqyN