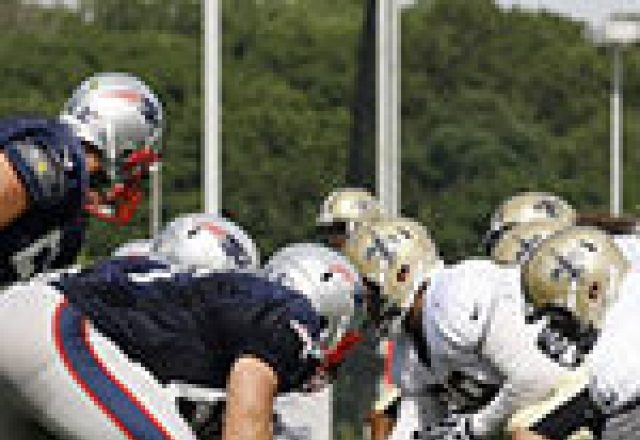 As the Patriots get set to hold joint practices with the New Orleans Saints later this week, the goal is to hopefully provide both sides with opportunities to work on situational football and create certain situations that might not necessarily arise during their exhibition game.

The last time these two teams got together for these was back in 2012, and Patriots head coach Bill Belichick and Saints coach Sean Peyton were able to have productive sessions and when it was over, both felt pretty good about what they accomplished.

Payton spoke to the media on Sunday and said he has a lot of respect for the Patriots, and he’s looking forward to having his team work with them this week.

“I’ve said this before, back in 2006 in any business you would study closely who is having success and they have been a team we study to see the sustained power they have had year in and year out has been pretty impressive,” said Payton. “Any time we get a chance to work with them, 2010, 2012, again this year, it gives us a great opportunity.”

“I know this, I know how he is going to handle it with his players and we felt coming off the times we’ve worked together it has been real positive. We’ve already gone through the practice schedule for next week. We kind of have it all laid out. We will go in the morning both Wednesday and Thursday. I think when you can be around a Super Bowl champion, as much as they have won, I think it is a great opportunity for a team like us and certainly for me as a head coach.”

“Shoot, everything from how he acquires personnel,” said Payton. “I think he is very good at identifying what they are looking for. They have a role for a player when they sign him. There has been a ton of things just when you watch what they have put together over the years. They have kind of been the benchmark.”

The two teams will practice on Wednesday and Thursday of this week in anticipation of Saturday night’s game, with Payton pointing out that he’s taken some tips on how Belichick runs practices, and he’s always had great communication with him.

“You do not have that firsthand experience with how he might run a certain practice,” said Payton. “We understand how we run a joint practice. You try to receive as much information, visit with him when you can while they are here. Things come up, questions come up and he has always been good to me.”

According to the the Saints official site, both joint practices are set for 9:30am at The Greenbrier in White Sulphur Springs, W.Va.