4 years ago at 9:51 am ET
Follow @IanLogue
Posted Under: Uncategorized

We’re on the eve of the final preseason game of 2018 and here’s a look at this morning’s top stories.

It’s a difficult time of year, not only for the players but also for the coaches.  Making the wrong decision when it comes to letting an up-and-coming player go in favor of an incumbent who may be starting to drop off can be costly.  These are the types of things that keep coaches up at night, because while coaching is obviously important, it’s the players who, as long as the execution is there, are the ones who make the difference on game day.

Belichick talked about that process on Tuesday, explaining how difficult it is to mold a roster.  It’s a tough process, with the more difficult part of it coming down to making a decision between incumbent players and younger players who show potential.  But the biggest point of emphasis was on the word “improvement”, which Belichick said applies to both sides of this argument.  If an older player has plateaued and the younger player has shown he can reach or exceed that level, it’s situations like that which can spark an opportunity for them.

“Yeah, well, the most important thing in evaluating players is their improvement,” explained Belichick.  “So, if a player’s improving, then you’re most likely to take the high water mark as opposed to where he was three weeks ago when you feel like he’s passed that and he’s shown that that wasn’t the player that he was. He’s taken the experience, the coaching, the reps that he’s had, and he’s become more efficient at those things, whatever the position is and so forth. So, when you see that improvement, then you start to weigh what happened most recently over mistakes that were made a month ago if you feel like those have been corrected and that we’ve moved past those. So, that’s the most important word for any player, young or old.”

The biggest thing Belichick said they look for is an upward trend based on what they’ve seen recently.  The faster they seem to be trending, the better their chances of making the team.

With one game to go, the goal now is for those players who are battling for a spot to try and make enough of an impression to sway things in their favor.  But if they can show improvement just one more time, their chances might increase significantly and that’s exactly what Belichick said they’ll be looking for.

“We evaluate everything, but if there’s a rising trend, that carries a lot of weight,” said Belichick. “So, this is the last opportunity. If guys that have been improving the last couple weeks can add onto that, it will absolutely help them. It could help them a lot.” 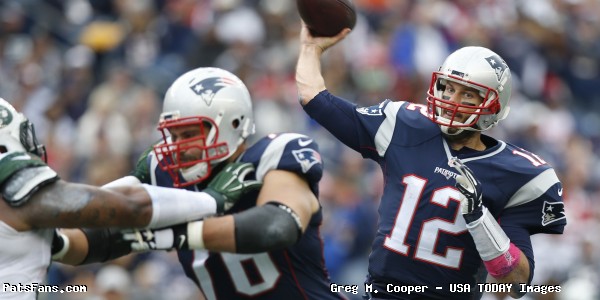 Vollmer was one of the Patriots’ most consistent players during his career.

Vollmer Earns Praise – One player whose name came up during this discussion on Tuesday is former right tackle Sebastian Vollmer, who Belichick said really impressed them during the early part of his career.

The former standout from the University of Houston was selected in the second-round of 2009 by the Patriots (58th overall) and started out as a tight end in college before moving to left tackle.  But when he came to New England, one of the things that impressed Belichick was how well Vollmer handled himself on both sides of the line, including going toe-to-toe against Dwight Freeney in camp and holding his own.

“Yeah, well, I mean, I think [Sebastian] Vollmer did a good job of that, especially early in his career when he played I think it was left tackle at Houston, then right tackle in the East-West game,” said Belichick.  “Then we worked him at right tackle in training camp, then he played left tackle against [Dwight] Freeney. So, for a player that didn’t have a lot of experience as a football player and didn’t have a lot of experience in the NFL when that happened to him his rookie year, he ended up playing both sides. Yeah, that was pretty good.”

The match-up against Freeney stood out to Belichick, but the other thing that also surprised him was the level of improvement Vollmer made over such a short period of time, which Belichick admitted happened much faster than they expected.

“He sure did, yeah,” said Belichick when asked about Vollmer holding his own against Freeney. “Sebastian is a player that improved tremendously in a very short period of time. He had trouble at Houston. He had trouble in the East-West game, in the All-Star games. When we drafted him, we thought this was going to be a multi-year project. [We] loved everything about him – his intelligence, his length, his athleticism, his toughness, his work ethic – we just thought it would take a while. So yeah, he had a long way to go and he closed the gap very, very quickly, I think quicker than any of us could have realistically expected.”

“But, I’d say by the time we got to this point in training camp, he’d made some pretty big strides. So, I’d say it was more surprising early and then less surprising as we got into the season because he jumped over a lot of landmarks or measuring sticks early in his career in the first training camp.”

And that’s what the other players will continue keep trying to do tomorrow night. 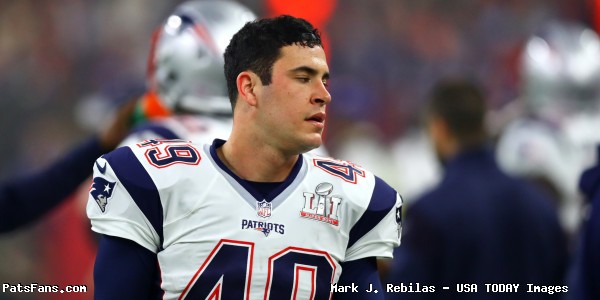 The award honors players who go above and beyond for their contributions in the community, with the team noting in their release that Cardona is also the first to earn the honor while also serving as a lieutenant junior grade in the United States Navy.

“Joe is a Patriot in the highest sense of the word, on and off the field,” said Kraft via the team’s release.  “Service to others is of principal importance to him, first to our country, as well as to our team and to our community.  This past offseason, Joe went on a two-week training session to South Korea with the United States Navy Reserves.  He serves his country and his team honorably and still manages to contribute by volunteering to serve and support many of our team’s community initiatives.”

The former fifth-round draft pick out of Navy in 2015 has been a key part of New England’s special teams unit, solidifying the long-snapper position as he’s quietly been a key component of the success of punter Ryan Allen and kicker Stephen Gostkowski.  Things like that tend to fly under the radar and it’s a position that Bill Belichick has emphasized over the years as being an important one.  Cardona has clearly earned the respect and admiration of his coach and the team, and also earned a 4-year extension this offseason.

Belichick praised him just last week when talking about him.

“Joe’s a very impressive person on a lot of levels,” said Belichick just last week.  “He’s just an outstanding example for all of us. His contributions and service to our country, his commitment to our football team and just his overall personal character and how good of a friend and teammate he is to everybody on the team. He’s a tremendous individual and I’m glad we have him, glad we were able to work out an agreement with him to extend it.”

– Belichick was asked about the challenges of making decisions on the fly as a head coach and said that while preparation is important, what they do on game day is obviously even more important.  “Yeah, well, preparation is a lot of that, but then once the game starts, then that trumps the preparation,” said Belichick.  “So, that’s what [President Dwight D.] Eisenhower said, right? Before the battle, everything is about preparation. Once the battle starts, preparation doesn’t mean anything. You’ve got to adjust to what the battle is. So, I think there’s a lot of truth to that.”

– Gronk also had some advice for those players who are trying to stick around.  “Just go hard, play hard,” said Gronkowski.  “Give it all you got this game. I mean, you’re not just showcasing for the Patriots but you could possibly be showcasing for around the league. So just play hard, do the best you can and finish plays.”  He also had some praise for fellow offensive player Shaq Mason, who just signed a long-term extension with the team.  “Oh yeah, I mean he’s a great player,” said Gronkowski. “His speed is unreal, the way he can close the gap on a small defender and just block him is unbelievable. He’s a great player and it’s always great to see guys like him get a deal like that.”

– Rookie running back Sony Michel and offensive tackle Marcus Cannon were both on the field on Tuesday for their second practice as they each continue coming back from injuries, which is a positive sign as the regular season looms closer.  Their statuses for tomorrow night aren’t certain, but one would have to believe that the team will continue taking their time and focus instead on making sure they’re both healthy enough to contribute this season.

– Several players who most likely will see time are newcomers receiver K.J. Maye and running backs Kenneth Farrow and Khalfani Muhammad, who were each spotted on the practice field Tuesday.  It’s hard to imagine any of them sticking around, but with each player trying to earn an opportunity in the league, every snap could be a difference-maker as each one looks to put something on film to bolster their case, even if it’s just on someone’s practice squad.  But for one night, they’ll get to showcase their skills at Gillette Stadium.

– One harsh reality that fans are having to deal with is the future of Julian Edelman, who will be sidelined to begin the regular season as he serves his four-game suspension.  But as disappointed as fans will be to not see #11 each Sunday, Edelman is coming to the realization that he’s about to begin his exile away from the team, which he admitted is going to be tough to deal with.  “Real football starts soon, so it’s definitely been a reality check,” Edelman said via Mike Reiss of ESPN. “I’m not going to sit here and worry about things I can’t control. Ultimately, I put myself in this situation, so it’s more of ‘let’s go and get myself ready for when I can play.'”  His return will likely be well-hyped given that he’ll be returning on a national stage, returning just in time for the team’s Thursday night match-up at home against the Indianapolis at Gillette Stadium on October 4th.