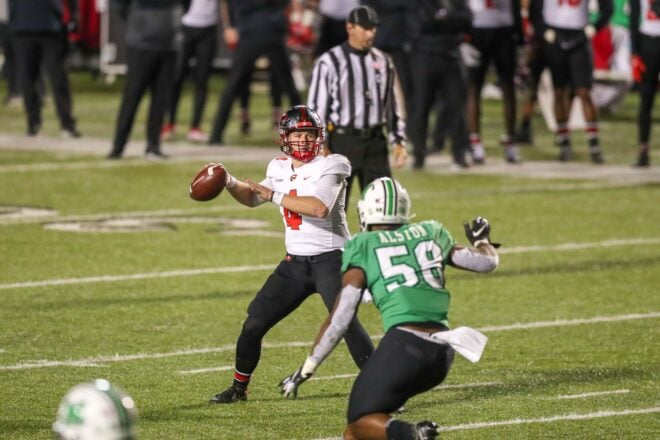 With the #137th selection in Round 4 on Saturday, Bill Belichick addressed another potential need after selecting Western Kentucky quarterback, Bailey Zappe, which certainly caught some people’s attention.

While fans may have had to stop and figure out what that meant for the team, it’s probably safe to say that Jarrett Stidham may have heard that message louder than anyone.

Zappe’s addition essentially puts the process in motion of trying to build quality depth behind starter Mac Jones for the future, with Stidham currently in the final year of his contract heading into 2022.  At 37-years old, it’s obvious that Hoyer isn’t the long-term solution they need either, which is why adding Zappe definitely made sense.

The Western Kentucky standout had an unbelievable senior year, breaking Joe Burrow’s touchdown record of 60 by throwing 62 in 2021.  Looking at the film, one of the things that stands out is the fact he shows a great touch on deep throws and an extremely quick release, as well as having a pretty strong arm.

He also has really good pocket awareness and throws well on the run, throwing an accurate ball outside the pocket on plays where he’s forced to move around and he keeps his eyes downfield.  He’s also very accurate overall, finishing the season having completed 69.2% of his passes while also throwing for almost 6,000-yards.

Having two quality guys on the roster at that position is never a bad thing, which we experienced firsthand in 2008 with Tom Brady and Matt Cassel, with Cassel doing a solid job when Brady got hurt  He also later garnered a 2nd round selection when he was traded with Mike Vrabel to Kansas City, with that selection ultimately turning out to be Patrick Chung.

But it’s a bad sign for Stidham, whose days now appear to be numbered.

It’s been pretty obvious in recent years that the team had lost confidence in the former Auburn QB.  We saw that in 2020 when despite the wall Cam Newton hit late in the year throwing the football, Stidham was never granted a starting opportunity to potentially prove himself and possibly win the role.

According to multiple writers, with Tom Curran of NBC Sports Boston being the most vocal about the topic, the coaching staff had reportedly just seen enough in practice where they just weren’t comfortable putting him out there as a starter.

That was an incredible fall from where he was this time two years ago when the club went through the entire draft without addressing the quarterback position, seemingly ready to hand him the keys to begin the 2020 season.

But at some point, something changed and the team switched gears and brought in Newton.  Whatever happened from there shut the door on any shot he had of winning a job that had seemed to be his, and it’s probably safe to say that most Patriots fans probably even forgot he was on the roster this past season after Jones came in and beat them both out.

For now, we’ll wait and see how that part of things unfolds but Zappe’s addition adds a new storyline heading into training camp.  Last year, it was Jones vs Newton and his accelerated development ultimately landed the rookie the starting role.  The bigger question this preseason might be whether or not Zappe can do the same thing with Hoyer, who at 37-years old and a roster that may need every inch of depth, could possibly be the odd man out if they decide not to carry three quarterbacks.

It should be interesting to follow, but while Zappe appears to be a nice find, let’s just hope his services won’t be needed anytime soon.