1 month ago at 10:06 am ET
Follow @IanLogue
Posted Under: Patriots News 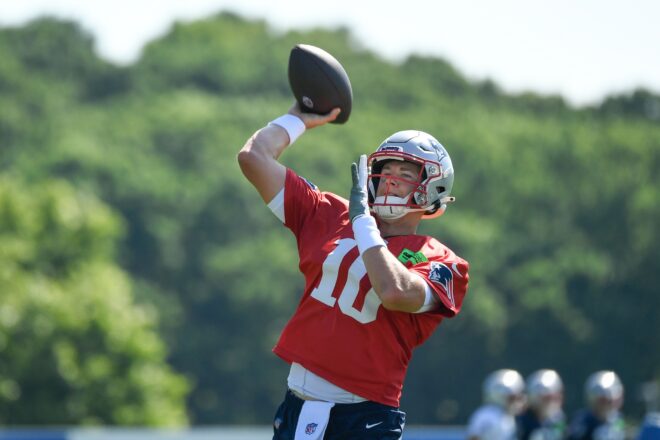 Some Patriots news on this Wednesday:

– There was some disappointing news on Tuesday after New England Patriots’ second-year defensive end Ronnie Perkins was placed on IR, which will see him miss his second straight season.  The former standout at Oklahoma and teammate of fellow Sooner Rhamondre Stevenson was selected in the third round of last year’s draft (96th overall – he was actually the compensatory pick from Tom Brady’s departure) ahead of Stevenson (who went with their next pick in round 4 at 120 overall) but dealt with an ankle injury that sidelined him last season.  Perkins seemed to be off to a good start in training camp, appearing in both preseason contests where he finished with four tackles and one pass defended against the Giants, as well as two tackles, and a sack in last week’s game against Carolina.  Unfortunately, he clearly suffered some sort of setback and we’ll now have to wait and see if 2023 will be the year he’s able to take the next step.

– The Patriots also announced another move, after Michigan offensive lineman, Andrew Stueber, was placed on the reserve/NFI list yesterday.  The 2022 seventh-round pick has missed a lot of time both during minicamps as well as missing a team event, with little insight as to what his issue is.  During his time in college, Stueber played well and seemed to potentially be a solid addition to New England’s offensive line.  According to Pro Football Focus, Stueber was ranked ninth in the country in pass-blocking among offensive tackles and spent most of his time at Michigan at right tackle, which given the recent uncertainty with Isaiah Wynn is a position where they could certainly use some additional depth.  Unfortunately, it appears he’s dealing with something and simply isn’t yet ready to go at this point.

– Meanwhile, the Patriots held their first joint practice against the Raiders on Tuesday and ended up with a fairly difficult test.  According to various reporters who were on hand for the session, wide receiver Devante Adams had a field day against New England’s secondary, with various players having a tough time keeping up with the veteran receiver.  They also had a challenging battle against Las Vegas’ defensive line, with the Patriots’ offensive line having difficulty opening holes to allow the ground game to get going.

– However, on the defensive side of the ball, they were apparently able to get pressure on quarterback Derek Carr and disrupt things, with the trio of Ja’Whaun Bentley, Matthew Judon, and Josh Uche each causing problems.  That’s been a key area for New England, which even with the changes in the secondary, the fact they’ve been able to generate a pass rush should potentially help hide some of their issues until they start to work things out.  The trio reportedly helped generate several sacks during the final 2-minute period, which was a nice way to finish.

– Safety Adrian Phillips said after yesterday’s session that sometimes when players are forced to deal with one-on-one match-ups against players like Adams and Hunter Renfrow, it’s not always going to go their way.  “You go one-on-one against them, more times than not, they’re going to win,” said Phillips via Phil Perry of NBC Sports Boston.  “I think it was a good test for us to see where we’re at and go against a solid core group like that and see how they work, how they go about their plays. It was fun to see that and go up against them, and kind of play that little chess match with them.”

– The offense wasn’t without success on Tuesday, with Mac Jones also finishing strong after a tough practice and even engineering a touchdown drive where he found Kendrick Bourne on a nice play that helped finish things off.  Bourne has had a rocky week after what happened last week against Carolina, and it appears he’s settling back in, with the wideout making a nice move on his touchdown that ended with an emphatic spike.  While the first team offense seems like it’s still working things out, the one thing to keep in mind is the fact that after tomorrow’s contest, they fortunately still have two full weeks to prepare for the opener in Miami.

– Jones probably said it best coming off of Tuesday’s practice.  He acknowledged that these times are simply part of the process when it comes to getting better and what people believe to be the results isn’t necessarily accurate.  “I think that failure is putting a label on something that’s not the process,” said Jones during his appearance on WEEI.  “We’re just trying to focus on the process and not the result and failure would be considered a result.  We’re just trying to work through it all and it’s just doing the basic things better and we can all do that, I can do that better.  Just get the ball to the open guy and carry on to the next play.  We don’t need to overcomplicate it.   It’s football and it’s a simple game if you make it a simple game.  We’re all trying to get there which doesn’t happen overnight and we’re making good progress so that’s all you can ask for.”

– The Patriots will hold one final joint session today ahead of Friday night’s final preseason match-up against the Raiders.