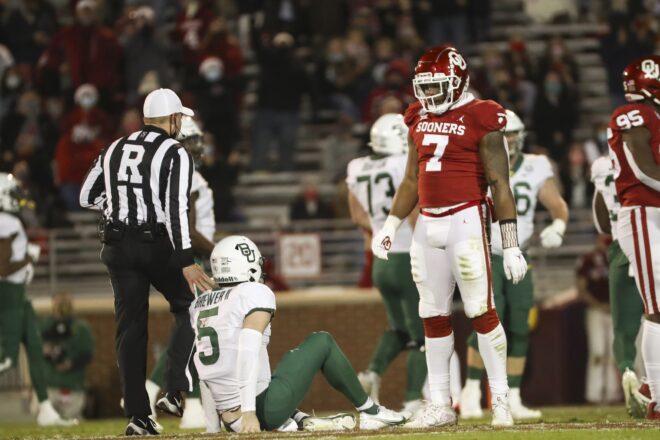 Taking a look back on what was a productive weekend for the New England Patriots in the 2021 NFL Draft, here are some thoughts on all of their selections:

QB Mac Jones, Alabama (#15) – This pick remains one that I believe will be a key moment in New England Patriots history.  After being bypassed by the 49ers, Jones was clearly disappointed by the time the Patriots were on the clock at #15 Thursday night.  The key question for fans at that point was whether or not New England felt that Jones was their guy, or if possibly the player they wanted had already come off the board.  If that was the case, it would have meant the club would have turned their focus to another position of need and waited until the later rounds for a different option at quarterback.

But moments later, the cameras shifted to Jones, who was on his cell phone talking to the Patriots, smiling as he got the news.  However, that smile disappeared after he hung up and headed up to the stage, with Jones’ demeanor immediately shifting as he now looked focused and determined.  It was the same look he had each week coming out of the tunnel down in Tuscaloosa, with the former Alabama National Champion QB barely taking time to grab his hat before walking onto the stage before being greeted by NFL Commissioner, Roger Goodell.

He may not be the most athletic, but he’s smart, accurate, and he’s got the right mindset.  Unlike some of the other prospects, Jones isn’t flashy but he gets it done on the field.  Needless to say, for anyone who has followed this team during the entirety of the Bill Belichick era, it’s the first time in quite a while that it really feels like they might have something special and it couldn’t come at a better time.

DT Christian Barmore, Alabama (#38 from CIN) – The Patriots traded up to grab Barmore, who is just an absolute beast and gives them the type of presence they’ve been lacking in the middle.  He’s a massive 6’5″ 311-pound player who is just incredibly powerful and is simply a nightmare for offensive linemen.  Needless to say, it’s a solid addition for New England and it should be fun to see how he fits in.

Ronnie Perkins, DE, Oklahoma (#96) – Perkins earns the honor as being the player selected with the compensatory pick awarded to New England thanks to Tom Brady’s free agency departure.  The former Sooners defensive end is powerful but also incredibly athletic, often getting the first step on offensive linemen while being too quick for players to pick him up at the second level.

He appears to be a force who should be a great addition to New England’s pass rush.  He’s just outstanding and like Barmore, should make the Patriots defense dangerous in the coming years.

Rhamondre Stevenson, RB, Oklahoma (#120) – Stevenson is a fellow Sooner and a power back who should be a nice compliment to Damien Harris.

Stevenson is big, coming in at 6’0″, 247lbs and despite his size, he’s surprisingly quick.  He doesn’t go down on first contact and tends to be the guy delivering blows and wearing down defenses.  Even better, he does a good job catching the ball out of the backfield and adds another dimension to what should be a much improved Patriots offense.

His addition likely means that the club isn’t picking up Sony Michel’s option, as well as the fact they’re preparing for a future that might not include James White after this season.  But if he turns out to be close to the player he was in college, it should be a nice 1-2 punch with Harris moving forward.

McGrone is insanely athletic, with film showing off his impressive sideline-to-sideline speed as well as his terrific quickness off the snap, which saw him spend plenty of time in the backfield of Michigan’s opponents.  He’s 6’4″, 215lbs and he ran a 4.43 40-yard dash during his pro day.

Belichick has often said you can’t coach speed and he’s definitely got a terrific athlete in McGrone.

Joshuah Bledsoe, S, Missouri (#188) – Bledsoe is another interesting addition as he’s a player who just flies around the field and makes plays, often ending up wherever the football is.

The standout safety from Missouri is 6’0″, 200lbs, and should be a nice addition to a secondary that can always use another playmaker.  Then again, having another guy named Bledsoe back on the roster certainly doesn’t hurt, either.

William Sherman, OT, Colorado (#197) – New England added some depth at tackle in round six, with Sherman appearing to be a solid selection.

Sherman has pretty good quickness and he’s a powerful guy, with the 6’4″ 310-pound Buffalo standout dominating defenders during his time at right tackle for the University of Colorado.

His addition appears to be a good one and it comes at the right time as the Patriots are still in need of trying to inject some youth into an offensive line that also needs depth at that position.

Tre Nixon, WR, UCF (#242) – Nixon looks to be a great addition, with the former UCF standout giving the Patriots both depth at receiver, as well as some size.

At 6’2″, 180lbs Nixon gives them a big body at the position and it should be fun to see him compete.  He’s a little sneaky in that his stats last season were reduced thanks to a broken collarbone, which he suffered while making a touchdown reception early in the season.

He’s extremely athletic, posting a 4.44 40-time along with an impressive 6.81 three-cone time.  We’ve certainly seen other guys with quick feet come out of the 7th round and one can hope that Nixon surprises everyone down the road and potentially becomes a factor in the Patriots offense.