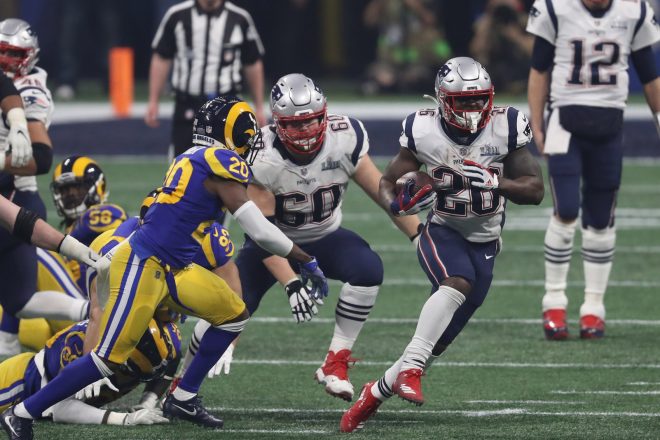 The Patriots have one of the deepest and varied sets of running backs in the NFL. It became a position of strength down the stretch and the team rode it to a Super Bowl title.

The Patriots had the league’s fifth-best running attack in 2018 and averaged 4.3 yards per rushing attempt. However, early in the year, injuries to Jeremy Hill, Sony Michel, and Rex Burkhead thinned out their depth considerably. That forced the team to use Cordarrelle Patterson as a running back for a time.

While Hill ended up on IR, Michel and Burkhead returned and the running game got better as the year progressed. Michel, in particular, was immense in the postseason rushing for 336 yards, averaging 4.7 yards per rushing attempt with six touchdowns in three postseason games.

Discussion – When it comes to the running back position, the Patriots are in great shape entering training camp before the 2019 season. There are, however, some question marks. Michel has had knee woes dating back to college, he missed some time last season and missed the mandatory minicamp in June after having another procedure.  Burkhead has also had injury concerns in his career.

Having both a full-go for training camp will go a long way to alleviate those concerns. Adding Harris is a huge step in that direction. Harris is an excellent between the tackles runner, he is quick to the hole and runs with his pad level low. He’s outstanding after contact and is used to working in a running back by committee approach at Alabama. He’s very good in pass protection and underrated as a pass-catcher with soft hands.

With Michel, Burkhead, and Harris the Patriots have three running backs who can all run the ball well between the tackles where they like to run. Burkhead is also a good receiver out of the backfield, something they are hoping to see more of from Michel this year as well as Harris, who got a lot of reps in minicamp.

James White is outstanding in his third-down receiving back role and can handle a few carries of his own during any given game. This gives the team outstanding versatility and unpredictability. They can go with a two-back set (21 Personnel) and then split the backs out wide if the defense stacks the box, forcing linebackers into coverage.

Michel, White, Develin, and Harris due to his draft status are absolute locks. Burkhead and Bolden are as close to locks as one can get. Bolden is a super-sub who can contribute offensively when his number is called but is most valuable on special teams where he was missed last year. By the way, the Patriots never emptied his locker.

It is going to be difficult for Brossette, the rookie from LSU to crack the 53-man roster unless there are some injuries there. Brossette is a typical LSU running back. Compact, with a solid build, runs low to the ground with power. He’s not overly athletic and with such a crowded backfield He’s a candidate for the practice squad.

Jakob Johnson is a former University of Tennessee tight end and German football league player who is part of the International Player Pathway Program which was instituted in 2017 and whose goal is to provide international athletes the opportunity to compete at the NFL level, and ultimately earn a spot on an NFL roster.

If Johnson doesn’t make the Patriots 53-man roster out of training camp, (doubtful), he will automatically be placed on the practice squad. And as an international player, that will automatically give the Patriots an exception, an 11th player allowed on the practice squad. However, that will render him ineligible for an active roster spot in 2019.

The Patriots are in terrific shape at the running back position with training camp…just 10 days away as we go to publication here. They will lean heavily on their running game and running backs for production in the passing game as well.