5 years ago at 8:46 am ET
Follow @IanLogue
Posted Under: Uncategorized 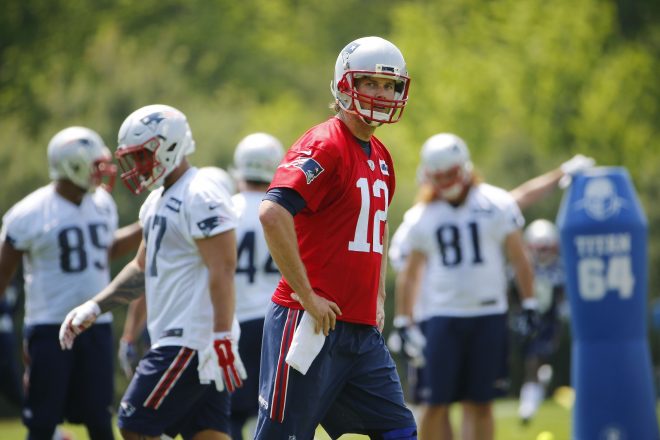 After a break while my daughter graduated college over the weekend, we’re back at it as we kick off the week.

Ryan’s New Deal Sets Bar For Brady’s Contract – While Tom Brady may have downplayed his current contract situation recently, the new deal signed by Matt Ryan may have just muddied the waters a bit if and when the two sides start discussing an extension.

Ryan’s deal pushed him up to $30 million annually, making him the first NFL player to reach that threshold.  That, coupled with Drew Brees’ two-year, $50 million deal, now greatly diminishes Brady’s annual salary of $20.5 per season in new money and as Mike Reiss pointed out on Friday, ranks him 16th among NFL quarterbacks.

He also saw his former backup, Jimmy Garoppolo, land what prior to Ryan’s was one of the richest in the league at $27.5 million over 5-years, $74 million of which was guaranteed.  Brady’s never been vocal about money, but one would believe he’s at least aware of what is now a sizable gap in his compensation for a player who has won two Super Bowls in the last four seasons.

His agent, Don Yee, told Adam Schefter last month that while Brady’s driven to outperform his contract, it’s still something that does cross his mind.

“His objective every year is to outperform his contract and his own goals,” said Yee.  “And like every player, yes, he thinks about his contract — it’s a pretty natural thing to do. Every team’s management knows this.”

One thing the Patriots have always done a good job with is figuring out a way to structure deals for Brady where the guaranteed money has made up for the lack of annual salary, which they’ve done in the past.  One would expect that to be the case when they eventually start discussing it this time, but unfortunately for the New England front office, it will be happening long after those other contracts got done.  Robert Kraft told Jeff Howe last month that when the time comes, he’s not concerned.

“He’ll be 41 when the season starts,” Kraft told TheAthletics’ Jeff Howe last month, per Pro Football Talk. “Neither side has an issue with it. If it becomes an issue, we’ll deal with it.”

While it’s not a big deal, it’s still a reminder of how quickly the landscape can change in a league that is heading into a showdown with the Players Association when the CBA expires after the 2020 season.  One other thing that to note is the fact that this year’s draft class will be affected since each of them will sign a deal that runs through 2021.  While that won’t affect Brady, it may affect 7th-round pick Danny Etling, provided he manages to play well enough to stick around that long.

Captains Favored By Patriots – Anyone who has followed this team for a long time knows that Bill Belichick appreciates guys who love the game of football and are well respected by their teammates.

That’s why one of the trends we’ve seen over the years is that players on college rosters who were captains on their respective teams seem to be players the Patriots have favored, and Nora Princiotti had an interesting stat in a column that ran on Saturday.

According to Princiotti, 21 of the past 42 players drafted in the last five years by the Patriots were captains, which certainly fits the mold of what we already know about the type of guys they prefer on their roster.

Captains tend to be players who are self-motivated and hard-working, setting the tone and earning the respect of the guys around them.

If those traits sound familiar, it makes sense that it’s those types of players they tend to target.  She also noted that recent draftees featured offensive lineman Joe Thuney, quarterback Jacoby Brissett, receiver Malcolm Mitchell, linebacker Kamu Grugier-Hill, linebacker Elandon Roberts and offensive lineman Ted Karras, who were each a captain at their respective schools.

While not breaking news, it’s a reminder that it remains a trait that doesn’t go overlooked by a team who demands a lot from the players who wear the uniform.

Patriots Fan Saves Eagles Fan After Donating Kidney – If there’s any bad blood between Patriots fans and the NFC North, it certainly doesn’t seem like it.

After losing two Super Bowls to the New York Giants and yet another against the Eagles this past February, you would think there would be some animosity between Patriots fans and that division, but that doesn’t seem to be the case.

According to ABC New York’s Channel 7, they ran a story on John Houlihan, a Patriots fan, and Patricia Pizzimenti, who is a lifelong Eagles fan.  Pizzimenti was in need of a kidney transplant and through an organ exchange, was matched with Houlihan and set any bad feelings he had aside to save her life by donating his kidney.

All kidding aside, it’s a great story and a reminder that after winning five Super Bowls and experiencing a few losses, Patriots fans still remember what’s important.  Kudos to Houlihan and best wishes to he and Pizzimenti moving forward after their respective surgeries.

No Brady in Louisville This Weekend – Tom Brady has been a staple at the Kentucky Derby in past years but opted to skip it this weekend, instead spending his time with his family as he continues taking advantage of as much time as he can there before he gets down to work and starts preparing for this season.

Brady posted a photo on his Instagram last week a picture of him working out on a beach quoting Muhammad Ali, which read, “The More REAL You Get … The More UNREAL It Gets.”

It likely didn’t help that the weather was miserable and wasn’t exactly conducive for a great time with teammates or his wife, Gisele Budnchen.  Instead, according to his Instagram page, Brady seemingly spent the time with his father, who celebrated a birthday on Sunday.

Brady wished him a Happy Birthday in his post, which showed them on the golf course together.  No word on whether or not it was he or his dad who came away with the win.

By: Robert Alvarez
Julian Edelman shares photos from the 2018 AFC Championship game in a 'throwback Thursday" post on Instagram.
18 hours ago

By: Robert Alvarez
Julian Edelman appears on the Barstool Sports "Pardon My Take" podcast, reacts to Bill O'Brien's hiring, and more.
18 hours ago

By: Robert Alvarez
Bill O'Brien shares his first comments and reaction in his first interview since becoming the Patriots' new offensive coordinator.
19 hours ago