2 months ago at 5:05 am ET
Follow @SteveB7SFG
Posted Under: Patriots Report Card 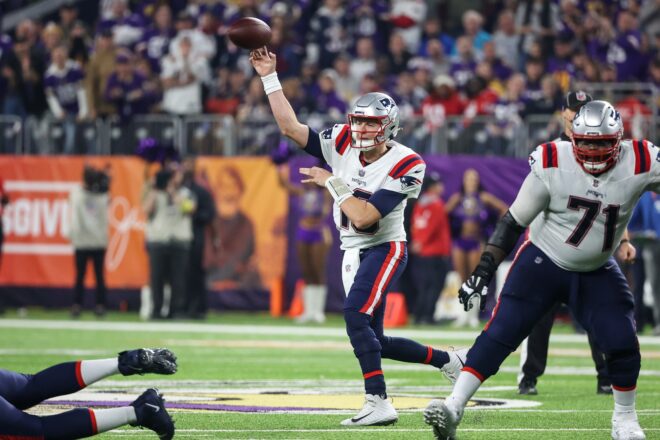 Good morning.  We hope everyone had a great, happy, and safe Thanksgiving. Here are your Patriots news, 11/27, and our positional grades for the Thanksgiving Night game against the Vikings.

The Patriots lost a tough one in Minnesota. Too many mistakes, many self-inflicted and bad luck with the officiating all contributed to the loss. And Minnesota happens to be a very good football team, so don’t sell the Vikings short. But this game was winnable, which makes the loss extra tough

Torrey Hunter: He also chimed in with this:

That was a catch by Hunter Henry 🤷🏿‍♂️

Darius Butler: The former NFL defensive back is not a fan of the catch rule.

Ball definitely moved but it never hit the ground. Henry maintained possession but ahhh who tf knows what a catch is 🤷🏿‍♂️

Patriots 4th & 2 Podcast: If you haven’t checked out our PatsFans.com podcast, “Patriots 4th & 2”, in a bit, please check it out. Derek and I looked at the Vikings game and how the teams stacked up against each other.

Positional Report Card Against the Vikings:

The Patriots against the Vikings was a frustrating one from the team’s standpoint as this game was very winnable, but mistakes (by the team and the officiating crew) ultimately doomed them and knocked them out of the playoff picture as well as put them back in the AFC East basement at 6-5.

The results and grades were once again a mixed bag. However, this time it was the offense carrying the defense for a change.

Mac Jones had the most passing yards in a game in his career. With improved pass protection, he was able to go through his progressions and deliver the ball with accuracy, especially some of the deep patterns. The Patriots had chunk plays of 40,40, 37 (TD), 34 (TD), and 26. It has been a while since we’ve seen that many big plays.

Jones’ numbers reflect what kind of a day it was for him. He completed 28-39 passes for 382 yards (9.8 yd avg), with 2 TDs and 0 INTs for a passer rating of 119.8. He wasn’t perfect and made some mistakes, notably at the end of the first half, taking a sack instead of throwing it away and losing valuable time.

But overall, when the defense was struggling to contain the Vikings, he was the straw, stirring the drink for the offense.

Damien Harris and Rhamondre Stevenson had only 52 yards on 12 carries (4.3 avg), and it was a curious decision by the coaches not to run more. Harris went out with a leg injury after only five carries.

Rhamondre Stevenson was once again asked to carry the load, but his touches in the passing game (9), were more than in the running game (7). Stevenson had 112 yards combined (76 receiving, 36 rushing) in the game. And as always, many of those yards came after contact.

The wide receivers easily had their best game of the season; it is no huge surprise when the offensive line gives the QB time to throw. The team had five players with 60+ yards receiving; three of them were wide receivers.

DeVante Parker had a really nice game catching 4 passes on 4 targets for 80 yards, including some nice 50/50 balls. He had a 40-yard reception that was big. Nelson Agholor saw increased snaps on Thursday and had 6 catches for 65, including a beauty of a 34-yard TD down the middle on the Patriots’ first drive. But it seemed the ball was there on the 4th and 16 desperation heave by Jones. Perhaps he lost the ball in the lights, but it seemed like he slowed up just a tad.

Jakobi Meyers was injured on the Patriots’ first offensive snap when he hauled in a 26-yard grab and left the game, but when he returned, he was shaken up again and left the game for good after another hard hit. He finished with 3 catches for 62

Hunter Henry was finally a big factor in the game as he was targeted five times and had three catches for 60 yards and a 34-yard TD. His game total should have been 4 for 68 and 2 TDs, but New York scoured that replay for several minutes, looking for anything to overturn it. The longer it took, the more I believed it would be overturned, and it was.

Bill Belichick framed his words perfectly after the game but said “Why don’t you guys go to the officials with your pool reporter and ask them about the play and let them explain it to you, right? Isn’t that what you do?” Belichick said. Jonnu Smith, after a nice game against the Jets, was a non-factor.

The offensive line had its best performance in several weeks as they did a much better job of protecting Mac Jones, even with two starters out with injuries. Late in the 4th quarter, the protection seemed to be breaking down more often, but overall this was a much better effort and, hopefully, a sign of better things to come.

Trent Brown had a head-scratching play in the 4th quarter when he tried to cut Danielle Hunter on a deep drop by Mac Jones, and the result was a sack.

The Patriots’ defensive line did a great job of shutting down Minnesota’s running game. The Vikings rushed 27 times for only 57 yards, an average of just 2.1 yards per rush. Minnesota RB Dalvin Cook was bottled up extremely well, as he only rushed for 42 yards on 22 carries for an average of 1.9 yards per rush.

The Patriots had seven tackles for loss, but the DL got very little pressure on Kirk Cousins, as he had a clean pocket for most of the game. One of the few pressures the line got on him (Daniel Ekuale), he threw a pick to Jonathan Jones.

The linebackers weren’t able to generate much of a pass rush either (just one sack). The Vikings double-teamed Matthew Judon for much of the game; he did draw one (1?) holding penalty, and two QB hits. Josh Uche had the only sack, a tackle for loss (TFL), and a QB hit.

Raekwon McMillan had a couple of big plays snuffing out a screen and a wide running play that he blew up for losses.

The Patriots’ secondary allowed Kirk Cousins and Justin Jefferson to complete 31-38 passes for 310 yards with 3 TDs and 1 INT for a QB rating of 116. The completion percentage of 81.6 is the highest of any defense ever coached by Bill Belichick.

They threw the kitchen sink at Justin Jefferson but couldn’t do anything to stop him, allowing 9 catches for 139 yards on 11 targets. Jon Jones had a rough game trying to cover Jefferson and twice got flagged for face mask penalties. He did get an interception, however.

With all the attention on Jefferson, Adam Thielen and T.J. Hockenson combined for 104 yards on 14 catches and 2 TDs. But Jones wasn’t alone; Myles Bryant fell down trying to defend a crossing route and then got flagged for an unnecessary roughness penalty on the same drive.

Oh my, the Special Teams had a tryptophan hangover in Minnesota. First, they allowed a 97-yard TD return by Kene Nwangwu. Although Kyle Dugger was held on the play, he shouldn’t be the only guy responsible for bringing him down.

Punter Michael Palardy, who was so efficient against the Jets, sandwiched a booming 56-yard punt between two stinkers (36 and 31 yards). But the worst play was rookie Pierre Strong getting a running into the punter penalty on a 4th and 4. With new offensive life, the Vikings scored the game-winning TD on the drive. Inexcusable.

However, Marcus Jones returned a kickoff 46 yards, and Nick Folk was perfect once again, going 4-4 on field goal attempts and 2-2 on extra points. On the same return, Matthew Slater was blocked in the back twice and still made first contact. Those players saved the grade from being an “F.”

The defensive coaches had a great game plan (that was executed very well) to stop Dalvin Cook and the running game. But they couldn’t stop the Minnesota passing game, despite them throwing different looks in the secondary. They could get their players to get any pass rush, which affected the secondary as well

The offense flipped the script this week, the pass protection, while far from perfect, but it was good enough, and Jones threw for 382 yards against albeit, a beat-up Minnesota secondary. The lack of a running game seemed more by design than anything else.

The special teams probably got an earful when the team re-watched the film from that one. And deservedly so.

We’re on to the Bills on Thursday night.

The slate of games for Week 12 and my predictions are straight up for this week.

“Yeah, they did a great job. All those guys just doing their job on every play, and I didn’t feel pressure at all hardly, and just hats off to them for playing a great game in the run game, too. They did a great job. If we can just continue to do that, then I think a lot of things will go our way.

“Yeah, I think Matty P. did a good job there. Obviously, they have a good defense and a good rush front, so did it well most of the time, and then some other things we just have to clean up. As I said, the result wasn’t what we wanted, but as you’ve said, I think there were some good things there.