3 months ago at 7:47 am ET
Follow @SteveB7SFG
Posted Under: Patriots Commentary 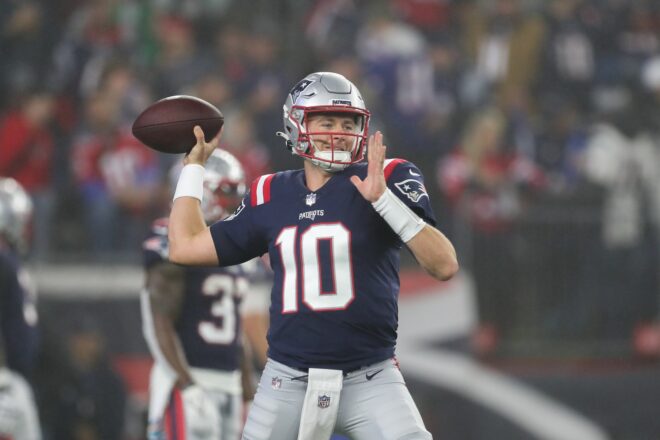 The Patriots head back on the road, albeit a short trip, when they head to New Jersey to take on the Jets. It is only their second game against an AFC East opponent.

The Patriots and Jets will then meet again in a few weeks. New England will play the Colts at home next week, followed by a bye week. Then the Jets will make the trip up to Foxboro. This week’s game is a big one for both teams.

This week’s game will be broadcast by CBS. Ian Eagle will be making the play-by-play with Charles Davis as the color analyst. Evan Washburn will work from the sidelines. The game will also be aired on the Patriots flagship radio station, 98.5 The Sports Hub, with Bob Socci and Scott Zolak on the call, produced by Marc Capello.

The Patriots (3-4) are coming off a 33-14 shellacking by the Bears. Chicago dominated all three phases of the game and rushed for 243 yards, with Justin Fields gashing the defense with 82.

The offense, with the exception of two drives in the second quarter, couldn’t get anything going.  Mac Jones returned from IR, started the game, and played for three drives before being lifted for Bailey Zappe, who played the remainder of the game.

The Jets (5-2) won their fourth game in a row, beating Denver 16-9. During their current streak, the Jets are averaging more than 141 yards per game rushing. They lost talented rookie running back Breece Hall with a torn ACL in Denver. However, they quickly made a trade with Jacksonville, adding RB James Robinson.

Damien Harris returned from injury last week, but neither he nor Rhamondre Stevenson could get anything going against a poor Bears run defense. The team struggled against a poor rush defense for the second week in a row. Now they face a much tougher one.

The Jets’ run defense has been very good, spearheaded by Quinnen Williams; their defensive line is among the best in the NFL, allowing just 105 yards per game (11th in the league) and 3.9 yards per rush (3rd).

The Patriots will probably be without center David Andrews (concussion protocol), which is a big loss. They’ll turn to James Ferentz, which will be a matchup against Williams that the Jets will look to exploit in both the running and passing games. It looks to be another tough sledding day for the Patriots running game.

Mac Jones is said to be the starter this week in New Jersey, according to ESPN’s Field Yates. Jones played only three series against the Bears a month after injuring his ankle against the Ravens. And he didn’t look good, trying to shake off the rust.

The Jets’ pass defense centers around a young secondary that has been playing terrific. Sauce Gardner is already generating a lot of hype (deservedly so) that he’s the next New York CB to earn the “Island” status, aka Darrelle Revis. The pass rush is led by Williams, who has five sacks, but Carl Lawson and John Franklin-Myers have stepped up their game during the winning streak.

I spoke with old friend and Jets’ beat writer Antwan Staley of the NY Daily News a couple of times this week, and he said that if the secondary has any weakness, it may be the safeties (Lamarcus Joyner and Jordan Whitehead) although Joyner leads the team with three interceptions.  This could indicate an area for Hunter Henry or Jakobi Meyers to attack.

But it all comes down to protection. Williams destroyed the Packers a couple of weeks ago, and going against Williams, it may require keeping the RBs in to block. Giving Jones time to look for Meyers, DeVante Parker, and Tyquan Thornton will be tough. One must wonder what the messy situation did to Jones this week’s confidence.

Next up is the Jets’ offense:

The Patriots’ run defense was awful on MNF, getting gashed for 243 yards. The Jets lost talented rookie RB Breece Hall for the season with a torn ACL. He would have definitely flipped the matchup for New York. They traded for Robinson and still have Michael Carter, giving them a pair of good backs. QB Zach Wilson has some wheels, and watching the tape of MNF could test the waters against the Patriots’ front seven.

The Jets want to run the ball, but the offensive line has been hit with injuries. Also lost for the season is guard Alijah Vera-Tucker, who tore a triceps in Denver. The New England front seven has to be much better on Sunday, and the feeling here is that they will be. The interior DL and inside LBs have to step up, stuff the run, and force New York into throwing the football.

The Jets’ QB Zach Wilson is 4-0 since returning from an injury suffered in the preseason. He’s cut down on the turnovers that plagued him as a rookie last year. However, the Jets haven’t asked him to do too much, and have relied on their running game.

New York has a good group of receivers led by rookie Garrett Wilson, Corey Davis, and Elijah Moore. Tight end Tyler Conklin and Carter out of the backfield give Wilson plenty of targets.

The Patriots’ pass defense has been very good with Jonathan Jones, and Jalen Mills, along with rookies Jack and Marcus Jones at cornerback, with a plethora of talented safeties that gives the defense the ability to mix and match. However, Kyle Dugger and Adrian Phillips were injured last week, so their status will bear watching.

The pass rush led by Matthew Judon and Deatrich Wise have to pressure Wilson on passing downs and hopefully cause a turnover or two.

The STs units on both sides are matched up pretty evenly, with kickers Nick Folk and the Jets’ Greg Zuerlein being money when asked to produce in the field goal department. Returners Marcus Jones and Braxton Berrios have been effective.

But the Patriots’ coverage units have been very inconsistent, which is why Jake Bailey’s net punting average is among the lowest in the league, just 35.4 yards. While Bailey hasn’t been his usual self, the coverage woes have hurt.

The Jets are looking to break a 12-game losing streak against the Patriots and continue their winning streak. And this is a good week for both. The Patriots are coming off an ugly MNF loss and are facing a short week to try to get things turned around.

Get the OL Issues Ironed Out — The Patriots running game has been struggling the past few weeks against terrible run defenses. This week they are facing a very good unit, and they’ll have to start winning the one-on-one battles.

The pass protection was not good on Monday and must give Jones time to find receivers. Regardless of who the QB is, protection is the key. Keep an eye on the play calling this week to see if they go back to what was working the three games Jones was out.  And stop with the drive-killing penalties.

Slow Down Jet’s Running Game — Robert Saleh has said that he wants the Jets to be a run-first team and control the clock and tempo. The loss of Hall was a big one, as well as Vera-Tucker on an OL that has suffered its share of injuries.

If they can force the Jets into having to throw the ball, they can bring the pass rush and possibly force Wilson into making mistakes. That will give them a puncher’s chance.

Win the Turnover Battle — You won’t win many games by turning the ball over four times. The Patriots have to flip the script this week and force the Jets into turning it over, something they haven’t done during the current winning streak.

If they are not careful with the football, this one will get away from them quickly. No fumbles or bad interceptions this week

I am still trying to figure out how the Patriots are favored in this one. This is a different Jets team than the ones the Patriots rolled over the past 12 times. Is there a lucky 13 in the cards?

I believe the teams will split the season series this year. The Jets will force New England into turnovers which will be the difference. The offense will struggle to move the ball against New York’s defense.  Jets 27-10

I hate to say it, but I agree with your prediction.