3 months ago at 10:23 am ET
Follow @MarkMorse5
Posted Under: Patriots News 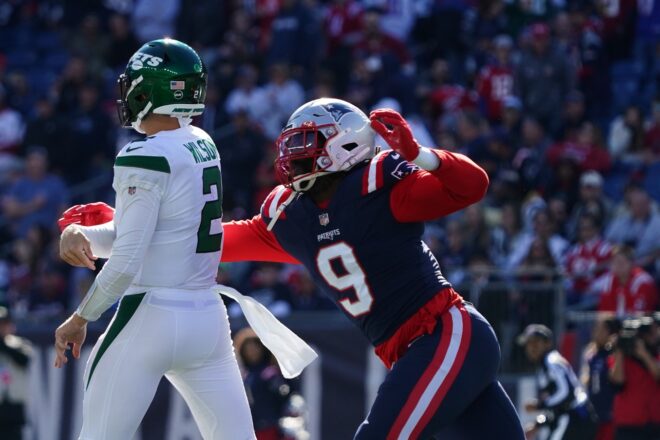 The Jets have been beset with injuries.  In this past week’s game, they lost Rookie of the Year candidate RB Breece Hall and starting OG Alijah Vera-Tucker.  They still won the tough battle with the Broncos in Denver.  They are 5-2, have won 4 in a row and three of those wins were on the road.  At home, they beat Miami 40-17.

Breece Hall has been lost for the season.  His numbers were terrific as he was ranked in the top 10 running backs in the league.  The Jets didn’t waste any time and went out and got veteran James Robinson from Jacksonville Robinson.  He has come back from Knee Surgery and was splitting carries with Travis Etienne.   He will do the same with Michael Carter.  I expect Robinson to play on Sunday.

Berrios, the former Patriots 6th round draft pick in 2018 spent the 2018 season on Patriots IR.  Since he was on IR he received a Super Bowl ring for the Patriots’ Super Bowl LIII victory over LA Rams.  He has embarrassed the Patriots for letting him go at the 2019 cutdown date.  The Jets claimed him and he has been productive ever since.  He has 7 reverses, the same as his number of catches.   Those are good for 82 yards and 2 TDs.  He also has a touchdown pass to Zach Wlson on a fake double reverse.

Warren Sharp’s Football Analysis 2022 Football Preview supplied these nuggets about Zach Wilson.  When at BYU, Wilson used play action 28% of the time.  That is the 28th highest of 111 QBs. Wilson led the nation in Yards Per Attempt (YPA) and Adjusted Net Yards/Attempt (ANY/A).

Mike LaFleur is the new Offensive Coordinator.  He was the passing game coordinator in San Francisco where he used play-action at a 32% rate.  LaFleur also calls for pre-snap motion at the second-highest rate in the league.  These help the ratings of young QBs.

However, so far this year Wilson is only dropping back in Play-Action 17.3% of the time.  In order for the Play-Acton to work you must establish the run game.  With injuries and young running backs, this has been difficult.

Tight End has been a pleasant surprise with Tyler Conklin emerging to take the load.  He has 26 catches on 38 targets for 230 yards, 8.8 avg, and 1 TD.

The O-line once the strength of this team is hurting.  Alijah Vera-Tucker and Mahki Becton, two High draft picks are out.  Veteran Duane Brown was signed just before the season started and I like Laken Tomlison at G.  The running back situation and offensive line health is the reason the Patriots are actually favored by 1.5 points by Las Vegas oddsmakers.   They opened at -2.5 and the line moved to +1, then back to -1.5.

The Jets have a good group of Wide Receivers in Garrett Wilson, Corey Davis, Elijah Moore, Berrios, Jeff Smith, and Denzel Mims.  Smith, the former Boston College speedster has not been involved in the offense despite being active in all 7 games.  Elijah Moore and Denzel Mims have both asked to be traded.  Moore just might get traded and is listed as Questionable.

Lineups.com/NFL-team-rankings rates the Jets’ Defense at 75 points and the Patriots’ at 78.

The Jets Defensive line just might be the second-best to San Francisco’s.   Quinnen Williams leads the team in pass rushing from the DT position.  He was 4th in the league in Pass Rush Win Rate.  Williams is 1st on the DL with 26 tackles and 5 sacks.  Sheldon Rankins played 57% of the snaps as a rookie.  Expect an improvement from him.  He has chipped in with 20 tackles.  John Franklin-Myers has 14 tackles and 1.6 sacks.  Rookie Jermaine Johnson, who the Jets traded back into the 1st round this year has 12 tackles and 1.5 sacks.  Carl Lawson was their big Free Agent acquisition this year but he has failed to impress, but does have 3 sacks. Soloman Thomas, a former 1st round pick has been a disappointment.  He only has 10 tackles and no sacks.  They get pressure on 37.9% of plays by just rushing 4.  They only blitz 14.3% of the time.  That is 31st in the league.

The Linebackers are led by CJ Mosley.  The Jets have waited 3 years for their big Free Agent signing to emerge as the leader of the Defense.  He has 70 tackles already, more than double any other player.  Quincy Williams is second on the team with 37 tackles.  Kwon Alexander, another FA, is right behind with 33 tackles.

Safety Jerome Whitehead leads the secondary with 37 tackles but only 1 INT. Highly touted rookie QB Sauce Gardner is second in tackles with 33 tackles and an interception.  The ballhawk in the secondary is safety Lamarcus Joyner with 3 INTs and 30 tackles.  DJ Reed is the other CB and he has 30 tackles and 1 INT.  Michael Carter III comes in as a slot corner and has 22 tackles and no INTs.  The Jets play a tight,  man-to-man defense and rely on the front four to apply pressure.  Look for them to play press-man coverage against the Patriots.

NY Jets have a very good group of specialists.  Greg “the leg” Zurlein is kicking the ball as well as he ever did.  He is a threat from anywhere over midfield.  Zurlein is ranked 11th.  Braden Mann is 4th in punting.  Braxton Berrios is 24th in Punt Returns and 18th in Kickoff Returns.

Opponents now have several games of film on Zappe.  It was obvious the Bears D lineman were told to get their arms up and that resulted in 4 tipped balls at the LOS.

Zappe should be given credit for an excellent pre-snap read on the blitz picking out the right LB that was coming.  He zipped a pass to Rhamondre Stevenson for a big gain when the inside LB couldn’t get over in time.

Also Cole Strange blew a couple of blocking assignments when he doubled-teamed block on the NT 1st and couldn’t get back to pick up Roquan Smith who sacked Zappe.   He had a similar whiff on Smith on another play.

The ball that Mac Jones had intercepted actually hit the sky cam wire.  Twitter had the play slowed down and you can see the wire move and the ball slightly change direction.  I do not know what the ruling is on any type of interference.    ESPN sent out a tweet denying it happened at that the wire was 15’ up from the ball.  This is from the same organization that was complicit in Deflategate.  The video doesn’t lie.  The wire moves and the ball slightly changes direction.

Don’t feel so safe with Marcus Cannon at Right Tackle.  Pro Football Focus had Cannon ranked last in the league last week in blocking.  His rating was 51.7.  Yet they still have the Patriots’ line ranked 5th overall.

Cole Strange had a tough game but he hasn’t seen anything until he goes up against Quinnen Williams.  Last week PFF had rated him a 58.5 overall. Pass blocking is 71.8 and run blocking is 52.3.

READ NEXT:
Mac Jones May Have the Ball Back in His Court, But Now He Needs to Run With It
Posted Under: Patriots News
Tags: New England Patriots New York Jets