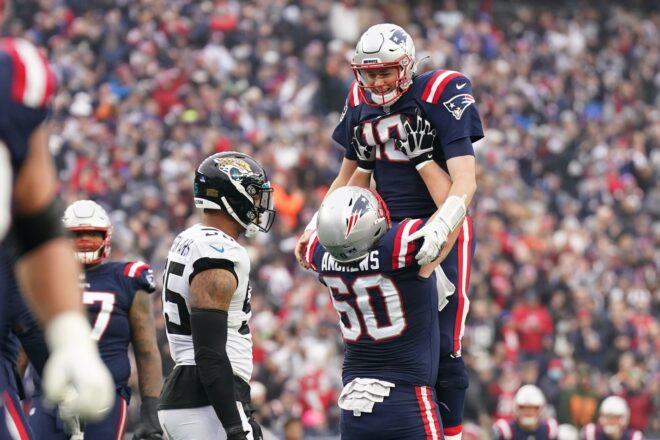 Some final thoughts heading into tonight:

1) Things in the AFC East remain challenging, with both the Jets and Dolphins coming up with wins while keeping the pressure on Bill Belichick’s football team heading into tonight’s game.

Buffalo remains at the top of the Division after sitting idle this week at 5-1, while next week’s opponent, the Jets, improved to 5-2 after beating Denver Sunday.  The Dolphins took care of business against the Steelers Sunday night, which improved them to 4-3 led by Tua Tagovaiola, who appeared in his first game since he suffered his second concussion several weeks ago.

The 4-3 mark by the Dolphins is the one New England can match tonight with a win over the Bears, which could set them up with an opportunity to move up in the Division when they face the Jets in a head-to-head battle for the first time this season next week.

The fact both the Dolphins and Jets have quietly emerged has certainly been a surprising twist that many likely didn’t see coming.  While the Dolphins were thought to be a threat in the AFC East, the fact the Jets have suddenly become a factor is certainly one of the biggest surprises so far this season.

In a Division that had been dominated for two decades by the Patriots with Tom Brady at the helm, it’s amazing that their three rivals are all back in the mix at the same time.  Buffalo’s ascension has dramatically changed the landscape and what happened last season certainly affected how Bill Belichick approached the offseason.  However, the rise of both the Dolphins and Jets has muddied the water, setting up what’s been one of the most unexpected seasons in recent memory.

With Mac Jones returning to the lineup after missing nearly a month with his ankle injury, that should hopefully give an offense that has finally been figuring things out the last few weeks a nice boost.  Rookie Bailey Zappe has been terrific stepping in during Jones’s absence, and the hope now is that Jones’ return results in the team being able to put together a similar midseason run that they achieved last season when they won seven-straight.

In his absence, Zappe has given Jones a two-game headstart, so they’re on their way.  Now it’s just up to the second-year QB to settle back in and build off of it.

Did the Time Off Pay Additional Dividends For Jones?

2) One thing that’s going to be interesting to see is whether or not these last few weeks have done more good for Jones beyond just his ankle.

The second-year quarterback looked fairly strong throwing the football in the opener, but the shots he took during the game seemed to affect him over his next two starts prior to his injury.

Jones downplayed the back injury he endured against the Dolphins in Week 1 when he got hit up high and down low and hit the turf hard, which saw him end up in the X-ray room following the contest.

He claimed after the game he was fine, but it was apparent seeing him throw the football in the ensuing games that it wasn’t the case.

While he got decent protection against the Steelers, it still felt that something was also off as he got knocked around against the Ravens, who hit him four times including three sacks.

As a result, watching the velocity behind his throws Monday night should be interesting to watch and hopefully whatever ailments he had been dealing with, aside from his ankle injury, are also behind him. 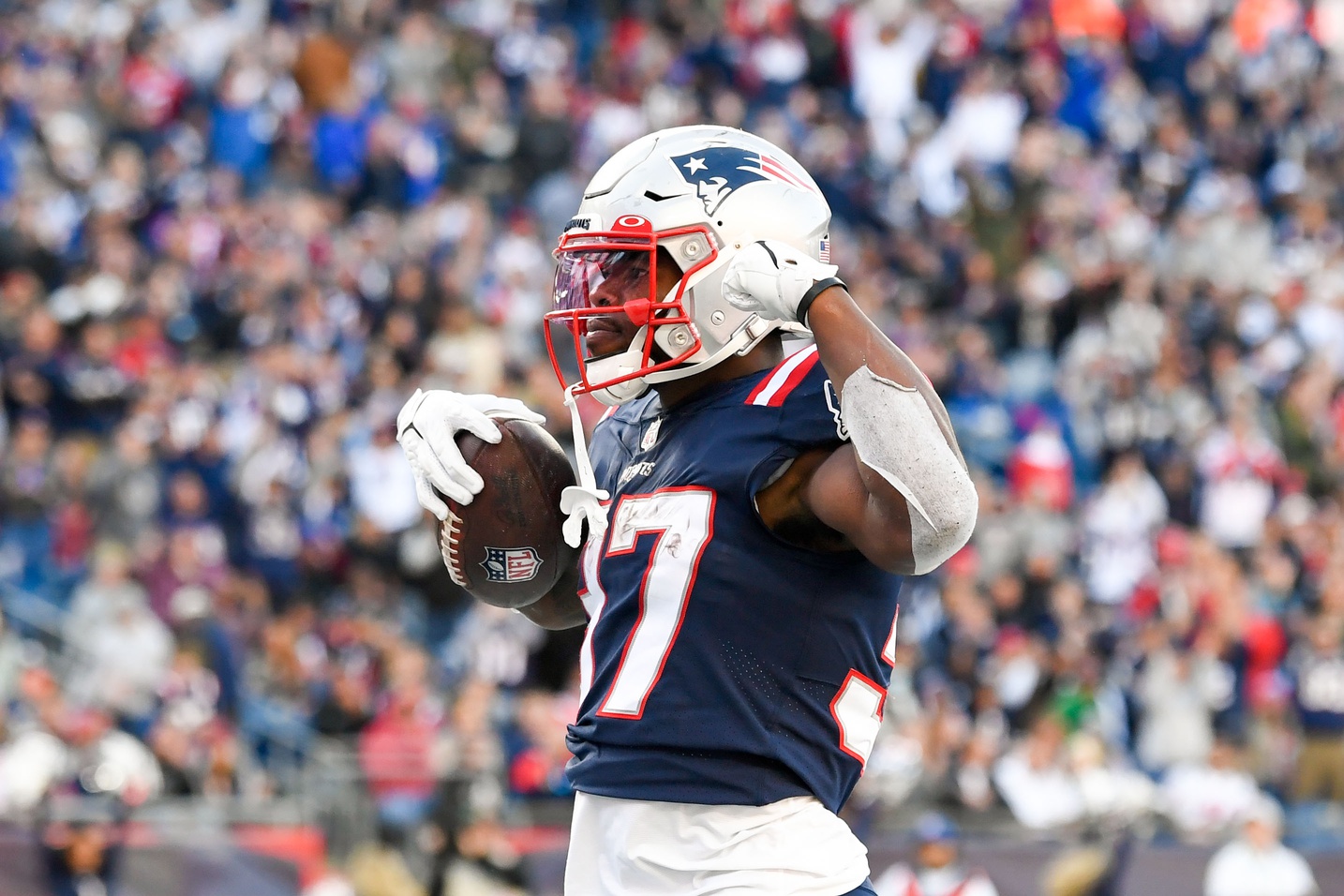 3) One bit of good news for the Patriots is the fact running back Damien Harris looks like he’s set to return to the line-up.

The veteran back was injured early in the contest against the Lions and missed last week, with Rhamondre Stevenson having to handle the load in his absence.

The two have been a lethal duo this season, which should be something that will give them an edge Monday night.

The Bears are among the worst in the league against the run, which given how New England’s offensive line has been playing, should allow for both Harris and Stevenson to hopefully flourish against Chicago’s defense.

Stevenson is currently the team’s leading rusher.  He’s rushed 87 times for 448-yards (5.1 avg) along with three touchdowns.  Harris is second with 57 rushes for 257-yards (4.5 avg) and also has three touchdowns.

He carried 4 times for 11-yards against Detroit before suffering a hamstring injury early in the second quarter and leaving the game.

Stevenson then stepped up and did a great job picking up the slack, including a second half where he carried 17 times for 92-yards during the win. 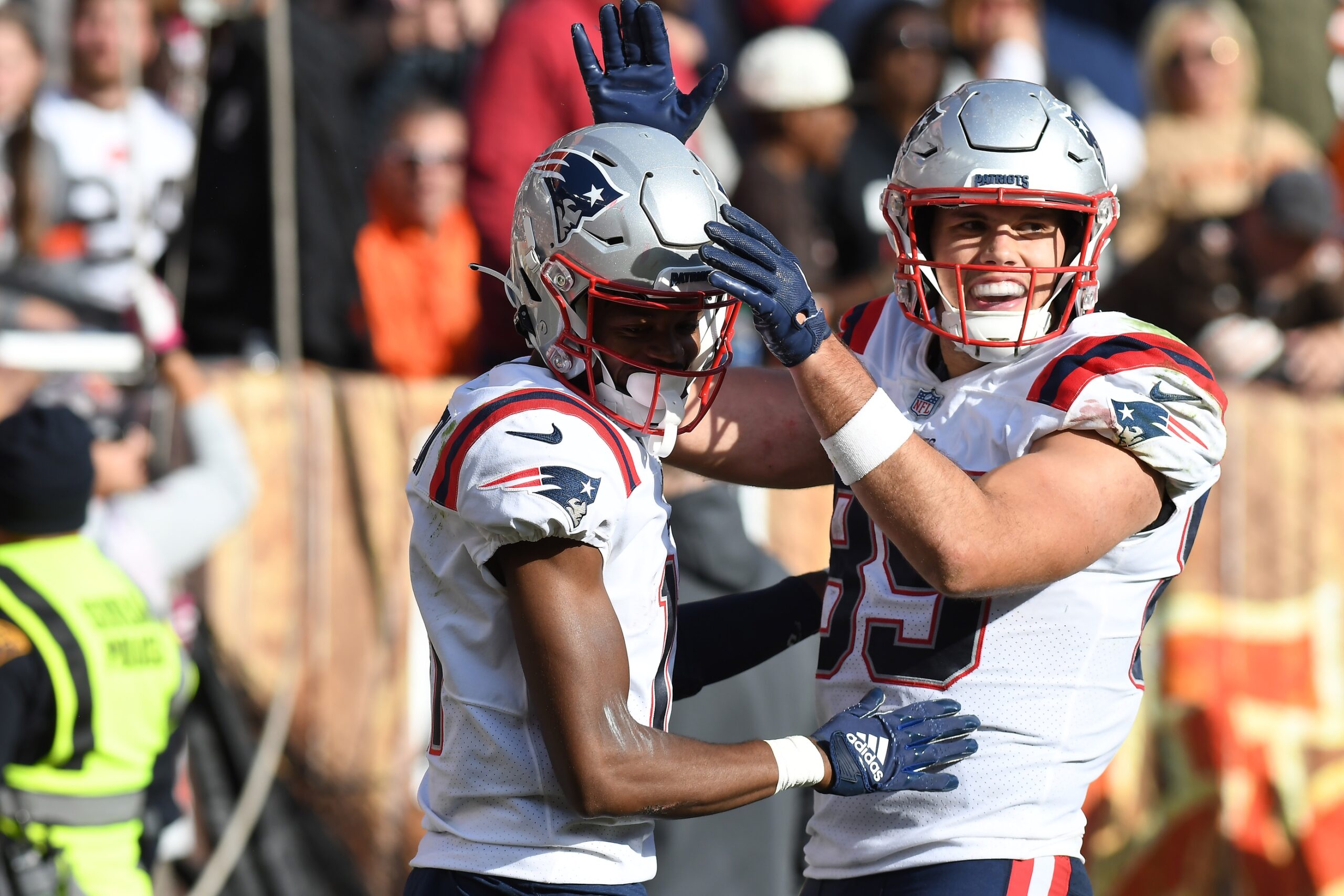 If the RBs have a Big Night, Passing Game Should Flourish:

4) As we’ve also seen, success on the ground also tends to pay dividends in the passing game, which should be another fun element to follow since Jones will also have Tyquan Thornton out there with him for the first time all season.

The rookie was sidelined while recovering from a fractured collarbone during Jones’s previous three starts and his presence should hopefully allow them to overcome a potential absence by Nelson Agholor, who is listed as questionable heading into Monday night’s game.  Agholor was inactive last week against the Browns.

Thronton had a busy week last week in his absence, catching one touchdown from Zappe while rushing for another.  That put the rookie out of Baylor in the record books after Mike Reiss pointed out that Thornton became the first Patriots rookie receiver to accomplish that feat since Irving Fryar did it during his rookie season in 1985.

Kendrick Bourne’s status is in doubt as he recovers from a toe injury which had him as a limited participant at practice this week.  He was listed as “questionable” ahead of Monday night and reports have indicated he may miss this game.

Meanwhile, Jonnu Smith is expected to play Monday night, with his name disappearing from the injury report after he’s been dealing with an ankle injury. He caught two passes for 61-yards last week against the Browns.

What Happens Tonight With Wynn?

5) One other story to follow tonight is going to be what happens with Patriots offensive lineman, Isaiah Wynn.

Wynn created some noise Friday after he seemingly scrubbed all logos and affiliations with the team from his social media pages, which could indicate that something is amiss between the two sides.

The former Georgia standout was among players to have potentially been on the trading block during training camp, but injuries along with a lack of depth made that appear to be too big of a risk, and Wynn has obviously since started the season with the team.

However, he’s struggled after transitioning to the right side of the offensive line at right tackle.  He currently leads the team in penalties and is also responsible for several missed blocks and has actually found himself pulled out of the line-up on more than one occasion.

New England was fortunate to have added Marcus Cannon in recent weeks, with Cannon slowly taking on a larger workload. His addition has been a stroke of luck, and he’s helped stabilize things a bit since returning.

Obviously, it’s been a tough run for Wynn because the fifth-year player, who had his option picked up this offseason, didn’t ask to make the move and it obviously hasn’t gone well.  Instead, it seems to have contributed to a contentious situation and Wynn’s actions certainly signify things are definitely not in a good place.

Both he and Trent Brown struggled early in the season, with Jones paying the price during Week 1 against Miami after he suffered his back injury.

However, Brown has come a long way since then, while Wynn has continued to struggle.

Taking that into consideration, it will be interesting to see if Wynn plays or what Cannon’s role is in this one as they try and keep Jones out of harm’s way tonight.

Patriots Have a Winning Streak at Stake Tonight vs Chicago:

6) One final thing to note is the fact the Patriots have a pretty significant streak on the line tonight against Chicago.

New England actually has a five-game winning streak against the Bears, having won every game going back to 2000 when the Patriots lost to the Bears in a 24-17 loss during Bill Belichick’s first season.

In their last meeting in 2018, the Patriots ended up with a 38-31 win in Chicago in a game that saw Josh Gordon finish as the team’s leading receiver. Gordon hauled in 4 passes for 100-yards in that outing, including one that went for 20-yards on a big fourth-down play that helped eventually set up a touchdown by James White that allowed the Patriots to re-take a 21-17 lead.

He also had a 55-yard grab early in the fourth quarter that helped set up White’s second TD and gave New England a two-touchdown advantage at 38-24.

Dont’a Hightower also made a big play in that game, blocking a punt in the third quarter that Kyle Van Noy picked up and returned for a touchdown.

The Patriots will face off tonight against the Bears at 8:15pm ET.