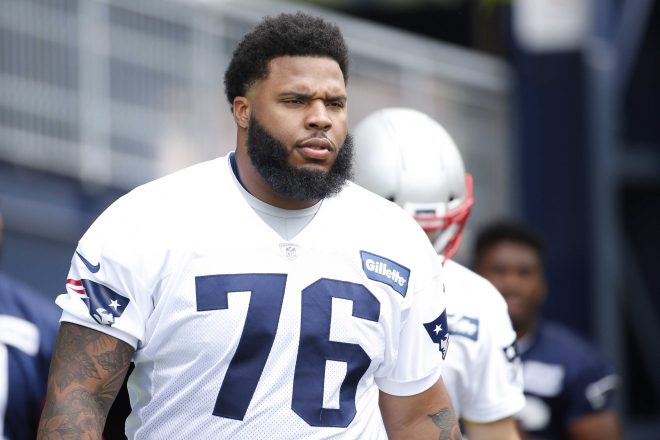 One of the interesting stories of the day centers around New England Patriots offensive tackle Isaiah Wynn, for who it appears there could be some trouble brewing.

The fifth-year tackle out of Georgia has had a rough go of things this season, with Wynn spending much of the season on the right side of the line after being moved to right tackle opposite Trent Brown during training camp.  Brown clearly outplayed Wynn, who has had his struggles on the left side and the team certainly appeared to feel like he’d be better utilized while anchoring the right side of the line.

It’s seemingly been a difficult transition, and during the preseason, it was clear Wynn wasn’t thrilled with the idea.  In more than one press conference, Wynn was terse with some of his answers, and it definitely felt like he may not have been happy about having been asked to move.

“I’m just working to get better, coming out here every day doing what I can do wherever they put me,” said Wynn back on August 1.  Wynn was also asked if he had a sense of why he was moved to the other side.  “That ain’t got nothing to do with me,” said Wynn.  “I’m wherever they need me to be.”

That final sentence was repeated several times when asked by one reporter about the change.  When pushed further, he smiled and said,  “You want me to repeat it again?” before adding, “It’s my answer, so, you’re going to have to take it.”

Fast-forward to a little over a couple of months later, and Wynn doesn’t seem to be smiling anymore.

The veteran tackle leads the team in penalties by a high margin through six games and has had a tumultuous start to what appears to potentially be his final season in New England.

In fact, Wynn’s days as a Patriot could be numbered as he’s apparently removed all references to the team from his social media accounts, which could mean that all is not well between the two sides behind the scenes.

According to reports, Wynn’s name came up in trade rumors in camp, but due to a roster that wasn’t exactly deep at the tackle position, Wynn ended up sticking around to start the season.  Since then, injuries have eaten into their depth, but the recent return of Marcus Cannon seems to have stabilized that side a bit, which could mean the team may be pondering moving him heading into the trade deadline.

It’s an interesting situation in that Wynn didn’t ask to be moved to right tackle, which given that it’s almost like having to learn to write with your opposite hand, has likely been a tough transition.  Worse, it’s likely dropped his value down as a player heading into free agency, which is probably also adding to his frustration.

As a result, it creates another problem for an offensive line that took a few weeks to come together as it is and should they move him, it puts added pressure on Cannon and the few remaining players behind him to carry the load with little margin for error heading into the rest of the season.

Send the turnstyle packing. We can’t afford any more hits on Mac or Bailey.

He shouldn’t be playing tackle period. Patriots fucked that one up yet again