4 years ago at 9:01 am ET
Follow @IanLogue
Posted Under: 2018 Patriots Regular Season 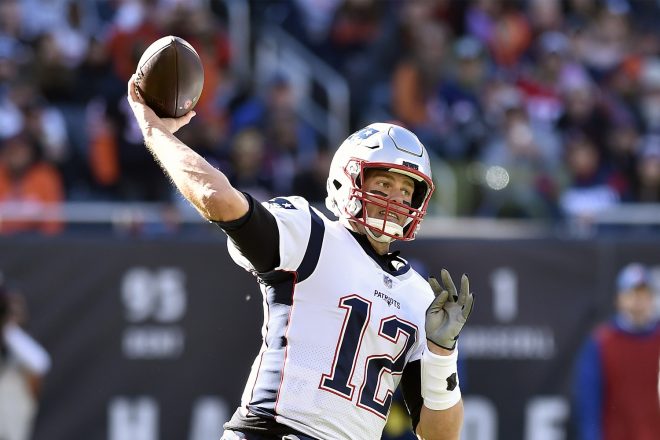 It wasn’t pretty, but the Patriots managed to win their fifth game of the season out in Chicago after pulling off a 38-31 win over the Bears on Sunday.

Here’s a quick rundown of some things we learned from the win:

1) The Patriots Had a Tough Time Containing Trubisky – While quarterback Mitch Trubisky has had some success with his legs this season, Sunday’s match-up against New England saw the Patriots struggle to contain him as he went out and finished with a career-best 6 carries for 81-yards including a 39-yard scamper, surprising both fans as well as players in the locker room.

When asked how tough it was to bring him down, linebacker Kyle Van Noy (6 tackles, 1 tackle for a loss) told Fox 25’s Tom Leydon, “Clearly a little tougher than we thought.”

Five of Trubisky’s six runs went for first downs, and his 39-yard run was the longest rush given up by New England’s defense so far this season, eclipsing the previous two of 31-yards by Lamar Miller (Week 1, Texans) and Kareem Hunt (Week 6, Chiefs).  It’s pretty rare that you see a quarterback who isn’t known as a running QB holding the top spot against Bill Belichick’s defense, but that’s exactly what happened Sunday.

Throwing the football, Trubisky was held mostly in check.   While he may have finished with 333-yards passing and two touchdowns, they held him to just 8-of-20 (40%) passing in the first half as the Patriots took a 21-17 lead.  In the second half, Trubisky was picked off twice in Patriots territory, with the second seeing the Patriots capitalize with a touchdown that put New England ahead by two touchdowns at 38-24.

What could have been a big disaster saw Trubisky heave up a Hail Mary that Bears receiver Kevin White managed to come down with at the end of regulation, with White pulling in a 54-yard bomb in front of the goal line.  Fortunately, safety Duron Harmon alertly squared up his body and stayed in front of White, preventing him from reaching across or ducking underneath.  It was an alert play by Harmon, who had he opted to try and charge and tackle White low, it could have allowed him to potentially get in.

It may have been ugly, but enough went wrong in this game to remind Belichick’s team that they still have some work ahead.

2) Patriots Potentially Avoided Disaster Injury-Wise Sunday – Given that the Patriots are just starting to get healthy at the receiver position, Chris Hogan went down with what appeared to be a potentially serious knee injury after getting hit from behind in the leg during Julian Edelman’s first-quarter touchdown.

Hogan was in agony after the play, writhing on the ground before eventually walking off the field under his own power.  He immediately went into the blue medical tent but eventually emerged and went over to the bench, before getting onto the stationary bike and later returning to the game.

He came up big on Sunday as overall Hogan finished with 6 receptions on 7 targets for 63-yards.  The fact he avoided anything significant is huge for a team that already spent four games without Edelman and was without Rob Gronkowski Sunday.

Meanwhile, also injured in this game was rookie running back Sony Michel, who went down with what appeared to be a significant injury of his own on the Patriots’ third offensive series of the game.  On the play, he got caught up and twisted around and was in so much pain that he let go of the football and gave up his first fumble of the season, which is unusual for a player who had been incredibly sure-handed to start his NFL career.  The rookie was later carted off the field.

Things seemed relatively positive after the team initially listed him as “Questionable” to return, which appeared to indicate the injury wasn’t as severe as it looked on the replay.  However, he was later downgraded to “Out”, which made sense but sent a mixed message for those hoping he’s not badly injured.

As expected, players said little after the game, although White’s comments raised an eyebrow a bit.

“It’s tough to see a guy like that go down. He’s been battling some injuries and been working hard and playing well,” running back James White said via ESPN. “I saw him [after the game]. Just hope for a speedy recovery for him, whatever it happens to be. He’ll attack it.”

The “he’ll attack it” comment would seem to indicate rehab, although other reports remain vague for his prognosis. ProFootballTalk.com is reporting that Michel will undergo an MRI on Monday to see what he’s dealing with and hopefully, the news will be positive.

3) Gordon Continues to Settle in – Patriots receiver Josh Gordon had another strong performance, coming up big yet again for the Patriots in their win over the Bears.

Gordon caught 4 passes for 100 yards on the afternoon, 3 of which were first downs, including one that went for 20-yards on a key fourth down play on a drive that saw the Patriots re-take the lead at 21-17 after it ended in a 5-yard touchdown from Brady to White late in the second quarter.

He also had a 55-yard grab early in the fourth quarter that helped set up White’s second TD and gave New England a two-touchdown advantage at 38-24.

“Yeah, I had it matched up on the one-on-one and he just went up and got it. He made a great play,” said Brady of Gordon’s 55-yard reception. “We are just going to keep developing our confidence in one another, and he’s making great plays when I throw him the ball. Just got to keep doing it.”

“And we had a good play-action pass,” Brady continued. “I had great protection. He was running kind of a deep end cut, and tried to throw it and he caught it in stride and ran over the safety and got back to about the one-yard line. It was an incredible play. So we really needed that.”

The game marks Gordon’s first 100-yard game since he caught 4-passes for 115-yards on the road against the Steelers in his final game of 2017.  His previous one before that came in 2014 when he caught 8 passes for 120-yards in Atlanta against the Falcons.

4) Hightower Clutch Again – Dont’a Hightower had another solid outing and made one of the biggest plays of the game, pulling off a blocked punt in the third quarter that that saw Kyle Van Noy scoop it up and return it for a touchdown.

The play was critical as it gave New England the momentum and put them back up 31-24 after Stephen Gostkowski had hit a 29-yard field goal the series before to knot the score at 24-24.

It was the first blocked punt returned for a touchdown since Larry Whigham blocked a punt against the Ravens back in 1996, with Tedy Bruschi returning it for the touchdown in a 46-38 win.

The last time the #Patriots returned a blocked punt for a TD? @TedyBruschi at Baltimore on Oct. 6, 1996. #NEvsCHI | #GoPats pic.twitter.com/qUaGQhg6f5

It was a terrific day for the Patriots on special teams in general, with Cordarrelle Patterson also having returned a kickoff 95-yards for a touchdown in the second quarter.  It was the first time the Patriots had two special teams scores in a game since 2010, which saw former Patriot receiver Brandon Tate run one back for a touchdown, as well as former cornerback Kyle Arrington scoring on a blocked field goal.

Hightower said after the game it’s something they practice and he’s happy he was able to make a play.

“We practice and preach it, so it’s pretty cool, when you can come out here and execute it, a big game like this on the road,” said Hightower.  “We definitely needed it and it was perfect timing.”

5) Another great game for White – James White had another big game against the Bears as he continues putting up big numbers this season.

White finished as the team’s leading receiver in receptions for the second straight week after catching 8 receptions for 57-yards and 2 touchdowns, adding to his career-high touchdown total with 6.

He was also big on third down for Brady, finishing 4-of-4 for 30-yards with 4 first downs and a touchdown.

James White was big on 3rd down for Tom Brady against Chicago: pic.twitter.com/i0gwZQwRoV

White’s performance moved him ahead of Rob Gronkowski as New England’s leading 3rd down receiver, with White now sitting at 11 receptions (9 first downs) for 100-yards and 3 touchdowns on the season.  Gronkowski didn’t travel with the team this week and sat out Sunday’s contest.

White was also big at the end of the game, carrying the football eight times on New England’s final possession, running the clock down from 4:05 to 0:30 and leaving Chicago with just 0:24 to try and pull off a miracle.

Fortunately, the Bears fell short and the Patriots came away with their first road win of the season.

“It’s definitely good to walk away with a win,” said White. “We definitely still didn’t play our best game everything and but definitely better to correct the film with a win than a loss. Get back in there and try to fix things up. We have another tough road game, a division game against the Bills and that will be a tough environment.”

The Patriots will now return home to prepare to take on the Bills in Buffalo next Monday night.