4 months ago at 6:00 am ET
Follow @SteveB7SFG
Posted Under: Patriots Report Card 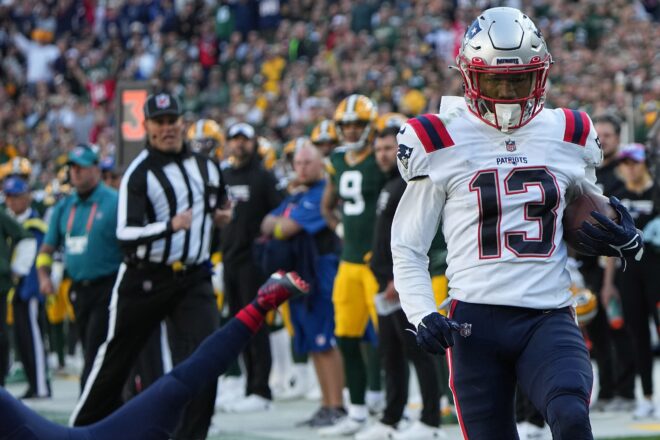 The Patriots were huge underdogs going up to Lambeau Field to face Aaron Rodgers and the Packers, but they took the game to overtime and had a very good chance to pull out the game. But they couldn’t get a first-down, and Aaron Rodgers can only be held down so long. So, in yet another game that was winnable, the Patriots went down in a tough loss due to some of the same mistakes that have hounded them since Week 1. They can be corrected but it is no longer an anomaly.

While there are no moral victories, the coaches have to be very pleased with the play of their rookie class. You know, the one that has been the subject of fans and media (local and national) bile from Taunton to Timbuktu. We’ll get into more of the rookies in the individual positional groups, but overall, it was a very good day for the 2022 draft class.

So, here are our grades this week for the Patriots-Packers game.

Brian Hoyer got the start with Mac Jones out with a high ankle sprain. As one would predict, the coaches kept the plays conservative, and Hoyer made a few nice plays to get them in field goal range on the opening drive. On the second drive, Hoyer was injured, at the time, which I thought was a helmet-to-helmet hit. But he was done for the day, and the team was forced to turn to 3rd string rookie QB Bailey Zappe.

Zappe actually acquitted himself really well for a player coming in cold for his first NFL action. This was the first time he’s even been active in a game this season, so coming in with few starter reps in practice this week, he showed a ton of poise.

He completed 10-15 passes for 99 yards and a touchdown for a passer rating of 107.4 on the day. But he made some mistakes, holding the ball too long on a few occasions, but his play-action pass to DeVante Parker for 25 yards and a score was a very nicely executed play all around.

His teammates, especially the veterans (Matthew Slater, Matthew Judon, Kendrick Bourne) were very impressed with how he carried himself on the field. Hoyer finished 5-6 for 37 yards.

With Jones and then Hoyer out with injuries, the Patriots were going to lean on the running game. The Packers knew they wanted to run the ball, as well as 78,000+ people in the stands, knew it. But they ran it well, grinding out 167 yards as a team, averaging 5.1 yards per carry.

The backs were impressive, with the 1a-1b tandem being very successful. Damien Harris led the way with 86 yards and a touchdown on 18 carries for an average of 4.8 yards per carry. Rhamondre Stevenson gained 66 yards on 14 carries (4.7-yard average), adding in four catches for 23 yards out of the backfield.

While there weren’t any highlight reel runs on the day, a steady, physical, impressive performance kept them in a position to win the game in overtime.

The Patriots were down two quarterbacks and down their most productive wide receiver, as Jakobi Meyers was inactive with a knee injury.  And while the group barely had 100 yards receiving, it is tough to place the lack of production on them alone, considering they were down to their 3rd string, rookie QB. However, on many of the pass plays, they had precious little separation.

Parker had only two catches, but the big one was the 25-yard touchdown. Nelson Agholor had three catches for 46 yards, one of which was the longest play from scrimmage on the day, a 27-yard pass play. Kendrick Bourne had a pair of catches for 23 yards and added 15 yards on a rushing attempt.

Lil’ Jordan Humphrey had one catch for nine yards. But he could easily be grouped with the tight ends as he’s been a very good blocker in the running game.

Jonnu Smith was injured early in the game and didn’t return. Hunter Henry was targeted only four times and had two catches for just 13 yards. That has to improve.

The offensive line gets very high marks for the holes they opened in the running game, which kept them in the game and very nearly resulted in a chance to win in OT. But the overall grade dropped because of the play of Isaiah Wynn, who continues to struggle at right tackle.

He again allowed an edge rusher to run free by him, resulting in a sack and a concussion of Hoyer in the first quarter. He allowed the strip-sack of Zappe and was once again (seemingly every week) flagged for a couple of penalties. He was benched for a time for old pro Marcus Cannon who was activated off of the practice squad. Cannon later served as an extra tight end as the team leaned heavily on the running game.

The offensive line allowed four sacks, but two of those were squarely on Zappe’s shoulders for holding the ball too long. The other two were on Wynn. *Rookie* Cole Strange had a strong game in the trenches

The defensive line was gashed by the Packers’ running game to the tune of 199 yards on 35 carries for an average of 5.7 yards per rush. Aaron Jones and A.J. Dillon combined for 33 carries and 183 yards.

There were some good individual plays from the group, including Christian Barmore and Davon Godchaux, but overall the line was pushed around in the trenches. Deatrich Wise had a quiet game after being dominant for three straight weeks.

Matthew Judon continues his excellent play this season. He registered a sack, a QB hit, and a tackle for loss (TFL). He was constantly disrupting passing plays and keeping Rodgers off balance in the first half. Ja’Whaun Bentley had nine tackles, and Jahlani Tavai had eight.

But the linebackers were also part of the run defense that was gashed by the Packers.

The Patriots’ secondary was also missing a key starter, Jalen Mills, and had the task of facing Rodgers, who has always been a tough matchup in Lambeau. But the unit star was yet another rookie, Jack Jones, who had a forced fumble, recovery, and a pick-six at the end of the first half.

Jones read an out route perfectly and jumped it with perfect timing, picking it off and returning it for a touchdown, giving the Patriots a 10-7 halftime lead. It wasn’t all perfect, the Packers were running to his side, but it was an impressive performance.

Other than Rodgers picking on Myles Bryant a bit inside, the coverage was solid all day long, but Rodgers made some really tight throws with good coverage.

The only downer was punter Jake Bailey, who had an uncharacteristic poor day. Two of his punts sailed into the end zone; he had a line drive with no hang time and a 32-yard shank at the end of regulation. But he also boomed a 62-yarder, so it wasn’t all bad.

Nick Folk continued his streak of consecutive field goals inside of 50 yards, hitting a 37-yarder as well as three extra points. But two more *rookie* standouts highlighted the Special Teams’ play this week. Brendan Schooler had terrific coverage on a 59-yard punt by Bailey and held Amari Rodgers to a gain of just four but was flagged for an awful horsecollar tackle, the replays clearly showed that he had a fistful of jersey and was nowhere near a horsecollar…but c’est la vie.

But fellow *rookie* Marcus Jones was electric in the return game. He had four kickoff returns for an average of 27.8 yards each. He also had two punt returns of 49 yards. After muffs in consecutive weeks, the Patriots finally trusted Jones enough to give him the job. And he can be a weapon.

The Patriots coaches had a very good game plan, and they were on the cusp of attempting a game-winning field goal attempt in overtime. The game plan, other than a few mistakes, was pretty solid. So was the play calling of Matt Patricia, who did his best to protect Zappe.

But in overtime, the Patriots coaches on both sides of the ball got a case of Marty Ball and played not to lose, which is different from playing to win. After Jones gave them outstanding field position by returning a punt 20 yards to the Patriots’ 49-yard line, Patricia got ultra-conservative, which the Packers were aware of, instead of trusting the rookie to attempt a game-winning drive.

Then Jerod Mayo and Steve Belichick, after playing tight man coverage all day, laid off the ball and allowed big cushions, which Rodgers exploited. They didn’t need to do that, which helped the Packers easily move the ball down the field.

We’re on to the Lions…