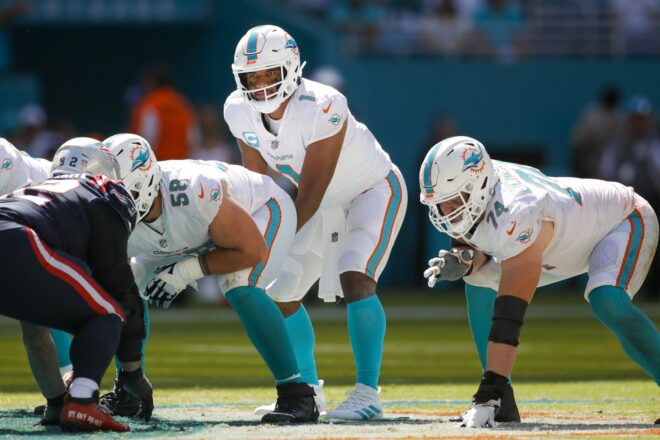 During the second quarter of the Miami Dolphins’ Thursday Night Football matchup with the Cincinnati Bengals, quarterback Tua Tagovailola sustained head and neck injuries resulting in him being taken off the field in a stretcher to a local hospital.

When the injury unfolded, Tagovailoa’s head whipped back and slammed into the turf during a sack from Josh Tupou. He remained down and displayed symptoms of a concussion.

This latest hit came just four days after Tagovailoa left the Dolphins game against the Buffalo Bills with an apparent head injury, but according to ESPN, he passed a concussion test at halftime and returned. The Dolphins later reported he had a back injury.

Following Tupou’s sack Thursday night and paramedics carrying taking Tagovailoa off the field, numerous current and former Patriots shared their reactions over social media. A few players criticized the Dolphins for letting Tagovailoa start the game in the first place.

It was no reason that man should of been in the game. SMH. Protect yourself because some people only see you as a football player.

Dude should not have been playing tonight

Very thankful today for the Patriots' trainers/medical staff for the way they handled my concussion in 2011.

I was out on my feet, they took it seriously, and I spent the year on IR. They saved me from myself. I would've rushed back if they let me. They didn't.

As of Friday evening, Tagovaiola’s health status remains unknown, but he was discharged from the hospital, traveled with the team, and shared the following statement.

Appreciate all the support! 🙏🏾 pic.twitter.com/jWBYyvbbwg

The Dolphins will head to the Meadowlands to play the New York Jets next Sunday. Teddy Bridgewater would be in line to start if Tua misses any time.