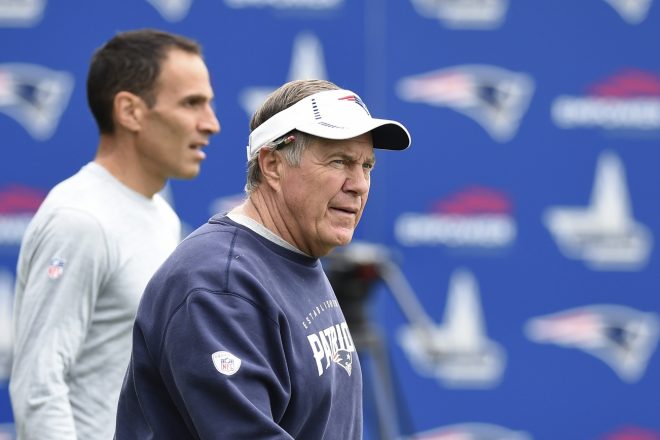 We’re through two days of training camp and things are already starting to heat up down in Foxboro as the Patriots finish up day two of their 2017 training camp.

Things got heated both out on the field and at the podium, with Bill Belichick already growing weary of all the individual player inquiries from the members of the media given that they’re not even in full pads yet.

According to Belichick, the “real training camp” begins on Saturday when the team dons pads for the first time and the players can start working more on technique and the challenges that come with contact in practice.  The highlights everyone has seen up to this point have been great, but he knows that they haven’t yet been challenged and it’s far too early to make any evaluations.

“You know, you guys are asking a lot of questions about what have we seen from ‘this’ guy, what are we seeing from ‘that’ guy. We’ve yet to put on pads, alright?”  said Belichick.  “I understand that this is a pretty talented group of evaluators in this room [referring to the media], but in all honesty our evaluations come more in training camp when we actually practice and we can fully execute the techniques and the plays that we’re trying to do.”

“So the main thing we try to get done in the spring and the main thing we’re trying to get done in these two days is to teach the players what to do to give them the most fundamental instruction that we can, given the restraints that we have on practice. Then when padded practices and, I would say real training camp starts tomorrow, we’ll continue for quite a while after that, including the preseason games, is when the real evaluations start.”

Belichick said that the bigger evaluations will be made when he gets to see how players compete when the pressure increases now that throws like the ones we’ve seen begin to become more contested.

“I know everybody’s all excited when a guy catches a pass, but when the defense doesn’t jam him or their not allowed to really, because we don’t want heavy contact out there, aren’t competing for contact at the end of the play then it’s not quite the same as when all of that’s going on. I’m not taking anything away from the receivers. I’m not taking anything away from anybody. I’m just saying it is what it is.”

Out on the field, things were fast and furious on a day where over 15,000 fans were on hand to get another glimpse one day removed from Thursday’s session.  They got their money’s worth, which included a confrontation between wide receiver Chris Hogan and second-year defensive back, Cyrus Jones.

The two got into it following a terrific play by Hogan where he beat Jones in coverage and hauled in a pass along the sideline.  After making the play, Jones gave Hogan a shove out of bounds that the veteran receiver took issue with.

Hogan got up, and exchanged words but turned to head back to the huddle when Jones tried to punch the ball out of the receiver’s hands. Hogan seemingly took the high road, and simply went back to get ready for the next play.

While it’s a minor incident, Jones needs to show a little more restraint, especially for a player who saw himself get ejected for a game during his rookie season after he threw a punch in the meeting against the Browns last season.  Shoving Hogan after he was out of bounds isn’t wise, especially since a similar play in a game could have drawn a penalty. Situations like that are something a player like Jones, who is likely seeking redemption, should be trying to avoid.

But those things happen in training camp, where tempers are high given what’s at stake for everyone.  They all have coaches to impress and bags to pack if they don’t do enough to earn a roster spot with their respective teams.

But the biggest thing Belichick said he focuses on when he evaluates each of his players is whether or not they’re not only competing hard, but also that they’re doing the right thing given everything they’ve been asked.

“The main thing for me is to see if they’re doing the right thing, doing it properly, how we can correct that, and then there will be a point in time where everybody will be able to go out and do it to the best of their ability against very competitive players on the other side of the ball and we’ll see what happens,” explained Belichick.  “That’s when the evaluations really start, other than if a person can’t take the instruction and do what you’re asking them to do or can’t do it properly, you can evaluate that. But in some cases it’s hard to evaluate how they’re doing competitively against somebody else when it’s really not a competitive situation.”

“We’re not in pads. We’re not tackling guys. We’re not jamming the receivers. We’re not blocking each other in the running game, or very infrequently. We’re not defeating run blocks. We’re not doing any of those things, so we don’t evaluate them.”

Apparently that will begin for real in his mind Saturday.